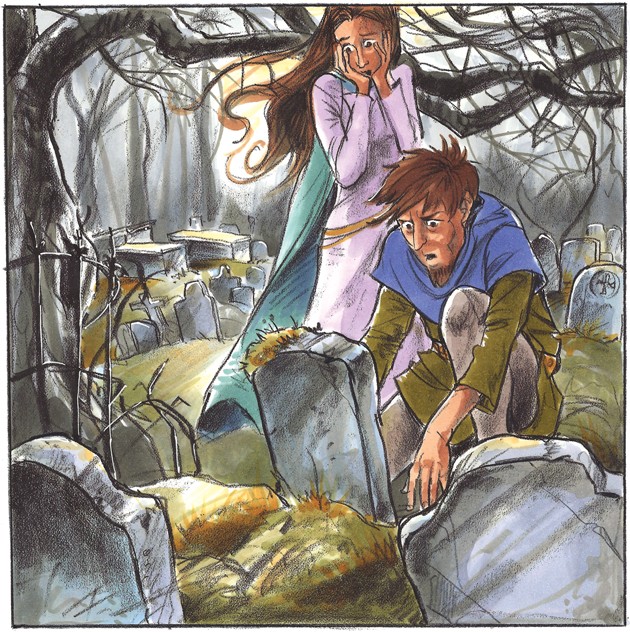 Once upon a time a poor peasant had six boys and one little girl. One day the girl, Yvonne, was taking the cattle to pasture when she passed a handsome young man. He was so beautifully dressed that she knew he was a prince. He took her breath away.

They stared at each other until the prince said, “Will you marry me?”

Before Yvonne had a chance to answer, the prince said, “I’ll meet you at this spot tomorrow morning and await your answer.” Then he rode away.

Back home Yvonne told her parents the story, and they laughed. They did not believe a word and teased her for her wild imagination.

But she begged for their blessing, so they said, “Marry whoever you wish.”

The next morning Yvonne went to the spot. The prince was there, astride his horse.

So he pulled her up behind him. When she whispered, “Can we go to my house to make arrangements?” he agreed.

Her parents were surprised, of course. Her father asked his name and where he lived.

“I’ll tell you on the day of the wedding,” said the prince, and seeing his great wealth, the parents agreed to the wedding.

The day of the wedding arrived. At the end of the ceremony, the prince swept Yvonne onto his horse and was about to ride away when Yvon, the youngest boy, cried out, “What about your promise to tell us who you are and where you live?”

The prince pointed east and said, “Follow the rising sun until you find a palace of crystal beyond the sea of darkness.” Then they were gone.

One year passed, and the boys missed their sister so much that they decided they must find her. But they insisted young Yvon stay home.

“You’re too much of a fool to be of use,” the boys said, and so the five brothers rode east until they reached a dense forest.

When darkness fell, they grew afraid, but they rode on until they came to an old woman sitting by a fire.

“Do you know the crystal palace?” they asked.

Suddenly they heard a rushing wind over their heads.

But the old woman said, soothingly, “These are your cousins, who have come for a visit,” and she convinced him to lead the boys to the crystal palace.

The giant spread a great black cloth upon the ground and instructed the nervous brothers to stand upon it. Then he walked into the fire. When his clothes were consumed, the black cloth rose into the air and carried the brothers away.

They landed on a vast plain filled with horses. They tried to mount the horses, but they could not. After many hours they gave up and decided to return home.

When Yvon heard their story, he decided he must find his sister. His brothers laughed at him, but he ignored them. He climbed upon his horse and rode east until he came to the old woman by her fire and demanded she show him the way to the crystal palace.

Seeing he was fearless and determined, the old woman pointed to a road, and off he set. And though poisonous snakes leaped up from the road and thorny branches sprang up beneath his feet and a deep lake barred his way, Yvon overcame every obstacle. He climbed and swam and carried on until he reached a kingdom of crystal. Everything shone as brightly as the sun. It was, indeed, the crystal palace.

Yvon walked through a dozen beautiful rooms until he came to his sister. She was asleep on a silk sofa. But when he heard footsteps approaching, he hid behind a curtain. Sure enough, the prince walked in, and Yvon watched as the prince shook his sister harshly three times, trying to wake her up. As she slept soundly, the prince gave up, then flung himself beside her and fell asleep.

Yvon stayed awake all night. In the morning, he saw the prince awaken and shake his wife three times again before walking away.

That’s when Yvon emerged from his hiding spot. He gently roused his sister until, thankfully, she awoke.

They greeted each other warmly, and Yvon asked, “Does your husband treat you well?”

“He’s everything I’ve ever dreamed of,” Yvonne answered.

“And is he always gone in the daytime?”

Yvon could see that his sister was bewitched, but he had a plan. He asked Yvonne to accompany him on a journey. Yvonne liked the idea, and when the prince returned, Yvonne told him she wished to travel with her brother.

“Very well,” the prince said to Yvon, “with this condition: She must not touch or talk to anyone.”

The siblings agreed and departed, and soon they came to a great plain. One half of the field was thick with fruit trees, and the other half was barren. Cattle were roaming the field, and half were fat and contented, the other half lean and miserable.

They traveled on and soon came to two trees angrily lashing each other with their branches. Yvon put his hands upon those branches and said, “Do not fight.”

A moment later those two trees turned into human beings, a man and his wife, and they embraced Yvon.

“You freed us from our enchantment,” they said. “Keep going west. Do not return to the crystal palace.”

Yvonne now understood that she could never return, and she and her brother walked on until at long last they had reached their village.

But everything was unfamiliar. They passed an old man and Yvon asked, “Do you know my father, Jacques Gauthier, father of seven?”

The man smiled and said, “My grandfather knew such a man, but he died long ago.”

The man pointed to a graveyard.

They had been away for one hundred years, and all they had once known was gone.