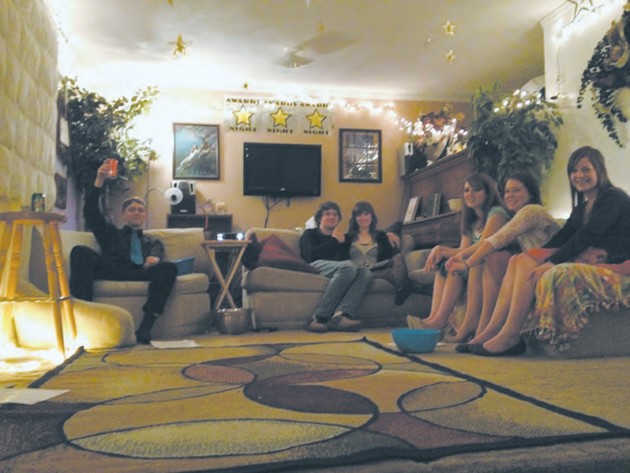 Lights line the walls and stars dangle from the ceiling in Robby Poffenberger’s Tooele home Sunday night. Scattered papers on the floor are Oscar prediction sheets, which each attendee was require to fill out upon arrival.

March 1, 2012
Oscar Sunday is the night when my kind of people get to geek out

On Oscar night, a small group of friends arrived at my house to find a red carpet running down my porch and leading up to my entrance way. Upon entering the house, they found silver and gold cardboard stars hanging from my ceiling and my walls lined with yellow Christmas lights and a sign hanging on the wall reading “Awards Night.”

Freshly-baked pizza from Papa Murphy’s, where I occasionally work, was steaming on the kitchen counter and footage of the real red carpet party was being projected onto my wall with a projector my dad rented from his work. At that point, one of my friends expressed that he felt underdressed, despite the fact that he was wearing a button- up shirt.

I believe my friends were mildly impressed but not altogether surprised at how much I had gone all out in preparation for my favorite night of television. I’m well known for being a self-proclaimed movie guru and I think one of the biggest draws for my friends is getting to see me geek out at the party as much as I do. I’m told it’s equally as entertaining as the ceremony itself. As I said in last week’s Flick Picks column, the Oscars are a movie lover’s equivalent of the Super Bowl.

I don’t know when this fascination with movie awards began, or whether it stemmed from my passion for film or vice versa — it’s quite the “chicken and the egg” conundrum. I keep up to speed with the Oscar race all season, following the winners of the precursor award shows, seeing the contending films and developing personal favorites. I probably shouldn’t admit to a hobby like that in print — there could be girls reading — but there you have it.

This year was of particular importance. It was my first Oscar ceremony as a published movie critic, so I’d seen a huge chunk of the nominated films, including all nine Best Picture nominees. This would also be my last Oscar ceremony until 2015, as I’ll be leaving for an LDS mission by summer’s end. This year’s great ceremony served me as a proper sendoff.

One highlight of the night was seeing Iran’s “A Separation” win Best Foreign Language Film. (A full review of the film will appear in next Thursday’s edition of the Transcript-Bulletin.) The movie contained the most affecting and humanistic story I’ve seen in recent memory, and coming from a place like Iran made it all the more relevant. Upon winning, director Asghar Farhadi said, “At this time many Iranians all over the world are watching us and I imagine them to be very happy. They are happy not just because of an important award or film maker, but because at a time of talk of war and intimidation, the name of their country, Iran, is spoken here through her glorious culture.”

My Oscar love isn’t exactly something I bring up on dates, but right then it felt pretty cool to be a fan.

In contrast, Billy Crystal said in his opening monologue, “Nothing can take the sting out of the world’s economic problems like watching millionaires present each other with golden statues.”

He may have a point, but again, it was hard to feel vain or worldly when Octavia Spencer won Best Supporting Actress for her performance in “The Help.” She was so overcome that she needed help getting to the podium and further broke down in tears when she received a standing ovation. Even Billy Crystal had to say afterwards that was what the Oscars are all about.

As the evening wore on and the pizza ran out, my friends began to dwindle, and eventually I found myself sitting with my family as the final awards were being announced. It was with them I saw “The Artist,” my favorite Best Pic nominee, win Best Actor, Best Director and Best Picture. My parents and siblings knew how much I admired the film and acted excited for me as I saw a great film get its Hollywood ending.

Of my predictions for the major categories, I went nine of 10 due to Meryl Streep pulling a surprise win over Viola Davis in the Best Actress race. That’s pretty good, and overall it was a night to remember. It was also a reminder why I have this dorky hobby of mine — after all, an ode to something I love is still an ode, whether it comes in a worldly, glamorous package or not.