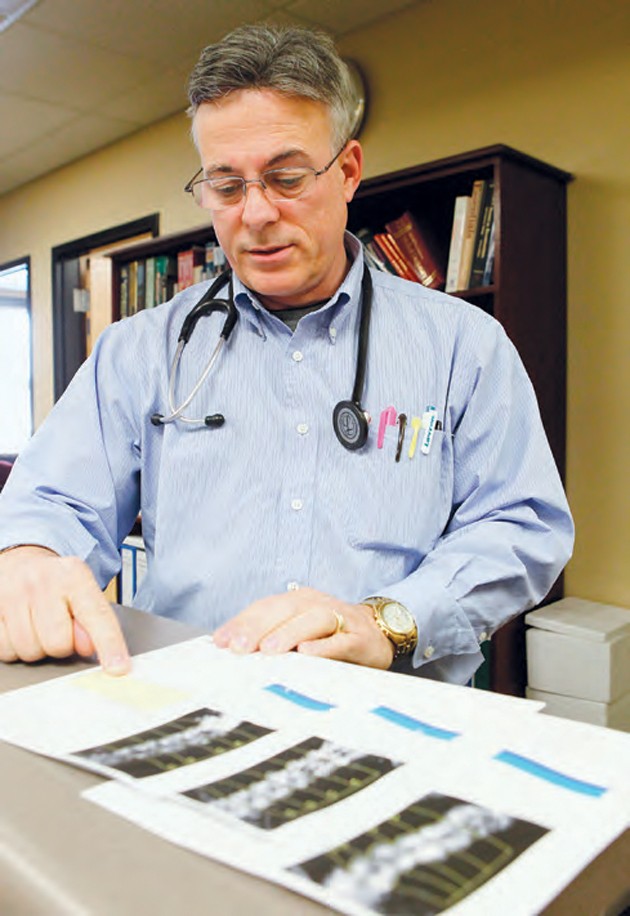 Ron Trudel, MD points at different bone scans that show osteoporosis Monday at his office in Tooele. Trudel specializes in helping those with osteoporosis at Mountain View Health Care.

When Tooele resident Eileen Van Reusen broke her finger in a car accident three years ago, she didn’t think much of it. But when she slipped and fell and broke her arm a couple of months later, she began to wonder if something was wrong.

Turns out, she was right. Van Reusen went to the doctor and learned she has osteoporosis. Even though she hadn’t reached her 60s and she had always been active throughout her life, she learned that she had a serious case of the disorder.

“I found out I had full-blown osteoporosis,” she said. “If I’d gone in when I was 50, I could have helped it, but it was too late.” Since being diagnosed, Van Reusen has been on medications that are helping to slow down the break-down process and rebuild new bone to keep her strong. She hopes that the next time she has her bones checked through a scan called a Dual Energy X-ray Absorptiometry, or DEXA, improvement will be seen.

I quit skiing because I was afraid to fall,” she said. “I have that fear of falling all the time. It would be nice to not live in fear.” Van Reusen is glad her osteoporosis was caught, but she hopes other people in the community won’t have to find out like she did. She said most insurance companies will cover the DEXA scan because it’s considered preventative care.

Even though the scan isn’t recommended until a person is 65, some insurance companies will allow people to have the scans as young as age 55. Those who don’t have insurance have to pay $125.

Ron Trudel, MD specializes in internal medicine and geriatrics at Mountain View Health Care. He said osteoporosis is basically a weakening of the bones, and is something he sees commonly in the Tooele area.

“Bones change every 10 years,” he said. “Depending on a person’s age, they break down and turn over to remodel themselves. Hopefully that turnover is quicker than the break down, but as you get older, the opposite happens. You have more breakdown than remodeling of new bone, and that’s osteoporosis. You go from healthy bone to where the bone looks like Swiss cheese.”

Osteopenia, which is the condition of the bones when they are past being healthy, and before they reach osteoporosis, is the best time for physicians to stop and sometimes even reverse osteoporosis from occurring.

“Bone density reaches peak at age 25, then at age 35 people start to lose bone density,” he said. “Osteopenia means bone that is on its way. When you go through this stage, it’s best to identify at this time so it can be treated before it gets bad.”

Although Caucasian and Asian women are the most at risk for osteoporosis, Trudel said men also run the risk for getting osteoporosis. However, he said one in two white females will have a fracture due to osteoporosis in their lifetime. Osteoporosis is also more common in people who have hyperthyroidism, adrenal gland disease, hypocalcemia, anorexia, serious weight loss due to fad diets or people who use steroids, seizure medications or tobacco, said Trudel.

“The best time to see a physician is if you experience early menopause, loss of height, have bone breaks, are using steroids or have a family history of osteoporosis,” Trudel said.

Treatment for osteoporosis include bisphosphonates, which work by slowing the break-down process in older patients, and selective estrogen receptor modulators, which use the parathyroid hormone to stimulate new bone growth.

“The medication promotes more bone growth, but you can only use it for two years,” Trudel said.

Another treatment procedure is an outpatient surgery called vertebroplasty. “In this process, we go into the back if a fracture is recent,” Trudel said. “We can put a needle in the vertebrae and inject a bone cement. It can go back to normal, because we’re filling the spaces within the bone. The pain leaves the patient almost instantly. But if the fracture is six months old, the surgery probably won’t work.”

Osteoporosis is determined through the DEXA scan. A patient lays down on a table, fully clothed, and an unassuming machine scans up and down along the body. Trudel said the vertebrae and left hip are what physicians typically look at to determine the level of osteoporosis through a Tscore, which expresses the bone density through a variety of statistics using standard deviation. “With osteopenia, we do a scan every year,” Trudel said. “With moderate osteopenia, I typically start medication and then have patients get a scan every two years. If people are normal, I have them get scans every three to five years.”

He added osteoporosis can be prevented by not smoking, not drinking alcohol in excess, getting enough calcium and vitamin D, and exercising.

“I tell older women to just use something like soup cans to lift or march in place, just as long as they’re doing some exercise,” he said. “Even getting out of a chair without using your arms is good. That puts more pressure on your pelvis and lower back and it helps.”

“Osteoporosis is something that I see a lot,” said Trudel. “The good thing is we can stop a lot of these fractures. It’s a big problem and it’s here to stay, but it’s a manageable problem.”

Members of the community who are interested in getting a DEXA scan can call Mountain View Health Care at 435-882-1644 for more information or to schedule an appointment.