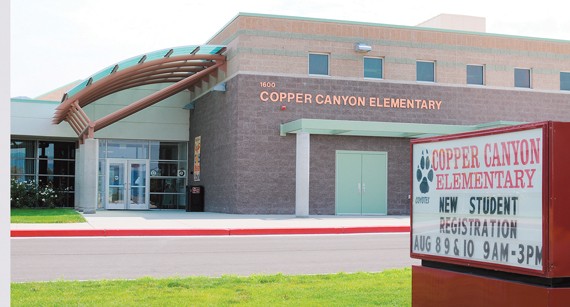 Copper Canyon Elementary School, shown on Monday morning in Tooele, was being paid off with state capital outlay funds. Tooele County School District is now proposing a 9.1 percent property tax increase to cover the loss of those funds.

While the Tooele County School District is proposing a 9.1 percent property tax increase to cover the loss of state capital outlay funds, other school districts in Utah that also had their capital outlay funding cut will not be raising taxes.

“It is a conservative figure, but if it comes above that it will be great,” said Frandsen. “We dealt with the cut last year by cutting back on maintenance projects.”

Six school districts are proposing a tax increase for the 2013 year, according to the Utah Taxpayers Association. Of those, Tooele County School District leads the way with a 9.1 percent proposed increase. Other districts proposing tax increases include Park City at 8.9 percent, Grand County at 8.4 percent, Carbon County at 2.3 percent, Beaver County at 1.1 percent, and Logan at 0.8 percent.

The 10 percent of basic funding mechanism is an option the state gives local districts to implement a tax that will yield 10 percent of what the state-mandated basic levy raises. Each year the state sets a basic property tax levy rate that is the same for all school districts. The district then receives the proceeds from the basic levy along with an allocation from state education funds to make up for the legislative-approved cost of the basic education program. Funds brought in by the 10 percent basic levy must be used for debt service, construction or remodeling of schools, school site acquisition, busses, equipment and supplies.

The 10 percent basic funding produces a more consistent revenue stream than the state’s capital outlay funding, according to Frandsen.

Tooele County School District is relying primarily on capital outlay funding to pay back a total of $32.5 million in lease revenue bonds issued by the district’s Municipal Building Authority. None of those bonds required a vote by taxpayers.

Cache County School District had its capital outlay funding from the state slashed from $1.1 million in 2011 to $520,000 in 2012. Still, that district has no plans to raise taxes this year.

Cache County School District raised its tax rate 6.6 percent over the certified tax rate in 2011, but that was before district officials knew about the state capital outlay cutback.

“The tax increase helped, but it was primarily for operating expenses,” said Hansen. “Not because of the drop in capital outlay funding.”

All Cache County School District debt has been accumulated via voter-approved general obligation bonds, according to Hansen.

While the Cache, Box Elder and Tooele districts are dealing with a reduction in capital outlay funding, Nebo School District’s capital funding will remain the same in 2013 at $5.7 million and Alpine schools will get a 51 percent increase to $5.3 million.

The Legislature allocates a fixed amount for capital outlay funding each year. That money is divided up among 13 school districts that qualify for capital funding assistance because of a low tax base per student, according to Bruce Williams, associate state superintendent for business and operations.

By law, the Utah State Office of Education must use data from the previous two years when calculating capital outlay allocations.

“If the economy improves and the assessed value in Alpine School District starts to go back up, the formula should shift back the other way, leaving more money to be distributed to the other districts that qualify,” said Williams.

Tooele County School District officials could not be reached for comment on this story.