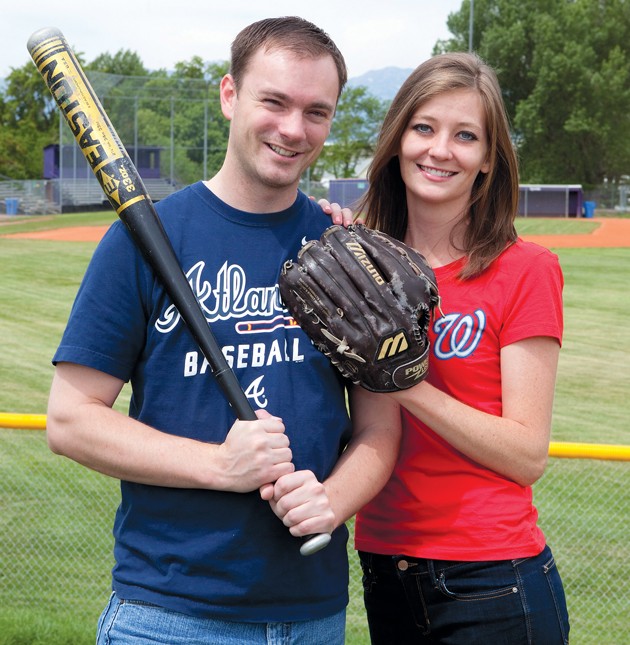 Sports Editor Tavin Stucki is somewhat dismayed by the baseball team his new wife, Arie, chooses to cheer for. He is a die-hard Atlanta Braves fan while she roots for the Washington Nationals. The two teams are rivals in the National League East.

June 11, 2015
Our house is divided but our hearts are united

I thought I hit the jackpot when I found out the woman I just married is a baseball fan.

Like, not someone who once bought a Cubs hat because she thought the little bear was cute. She’s an actual fan who follows all the games on Twitter and frequently checks the MLB At Bat app she downloaded on her phone. I think she’s even been to more MLB games than I have.

But whenever you meet a baseball fan in Utah, you have to watch out because some people can somehow enjoy cheering for some perfectly hate-able teams.

Since there’s no Major League team within 500 miles of my hometown in suburban Salt Lake, peoples’ favorite teams come in a mixed bag. For example, I and countless others like the Braves because we could watch their games on TBS during the ’90s. Other people might like the Angels or Twins because of the local affiliations with the Salt Lake Bees or Orem Owlz, or the Dodgers because of the ties with the Ogden Raptors. Since Utah is considered a submarket for the Rockies and Diamondbacks, there are a lot of fans of those teams here as well. Not to mention the Yankees and Red Sox have massive followings, as well as other teams.

Well, it turns out my wife has some pretty strong ties to Washington, D.C., from her trips to the nation’s capital campaigning for various political figures. Couple that with Mormon phenom and Nationals slugger Bryce Harper, and she’s got herself some of that awful Natitude.

To be fair, the Braves have more of a historical rivalry with the Philadelphia since the Phillies won the division five years in a row to help end Atlanta’s stranglehold on the NL East, but my loathing of Washington is much more recent and therefore more bitter.

But considering everything, I’m surprisingly relaxed on my wife’s misguided choice of fandom. It’s been fun to watch the games together and make innocent wagers on series outcomes. We’ve made plans to see a series or two live from each of the stadiums.

We received a card for our wedding from one of her former coworkers that reads “I’m still not convinced that a marriage between a Nats fan and Braves fan will work, but good luck and much happiness.” We also received a piece of living-room decor with our teams’ logos on either side that states “Our house is divided but our hearts are united.”

I guess jackpot lotto winners always have to pay tax on their new fortunes, so maybe it shouldn’t come as such a surprise that my jackpot baseball-loving new wife comes with the catch of loving a team I despise.

Tavin Stucki is a sports writer from Midvale, Utah, who enjoys cheering against several MLB teams. Contact him at tstucki@tooeletranscript.com.