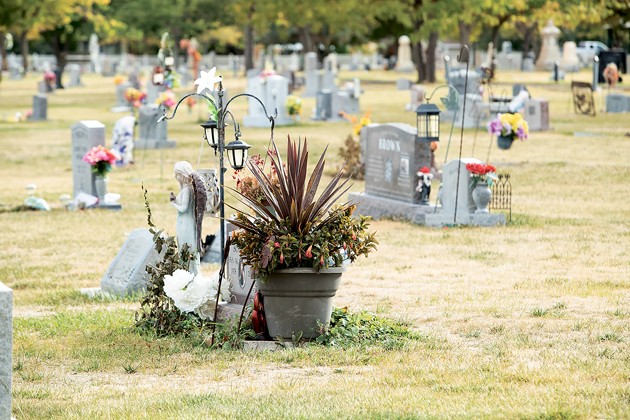 The Grantsville City Council has directed the mayor’s office to survey other cemeteries to compare burial plot fees.

Grantsville’s existing and future cemetery space was the topic of discussion during the City Council meeting last Wednesday evening.

Grantsville City Mayor Brent Marshall said some residents have asked the city to consider relaxing the city’s code that restricts graveside decorations during non-mowing months. Marshall said residents were asking for the relaxation of the code between Nov. 1 and March 1 each year.

After a brief discussion on relaxed standards during non-mowing months, outgoing City Councilman Tom Tripp requested to broaden the cemetery discussion. Tripp was elected to the Tooele County Commission and will resign from the City Council at the beginning of the year.

Among Tripp’s discussion topics was a cost analysis of nearby cemeteries and those in cities of similar size to determine if Grantsville City is charging enough for burial lots.

“I like having a community cemetery here and we have plenty of use of our community cemetery,” Tripp said. “But there have been times in the past where we’ve been so low priced that people shopping for a cheap place to be buried simply come here. I don’t really think I want to subsidize non-residents in that way.”

The council approved a motion by Tripp to direct Marshall to do a survey of 10 surrounding cemeteries to compare fees.

Councilman Scott Stice said the city had yet to meet requirements of a conditional use permit allowing for the 6.8-acre, Clark Farm adjacent property to be used as a cemetery. The city still needs to install fencing and buffers with adjacent properties and complete a road through the property.

Stice also said having a road through the cemetery could allow parking in the adjacent field or in a parking lot that could also be used by the Clark Historic Farm, to get cars off of Clark Street during events. Marshall agreed it could be helpful for parking, and said the city might also install restrooms for use by cemetery visitors, which would also be available to the farm.

“It would relieve a lot of the pressure with the residents and the concerns that they have when there is events being held,” Marshall said.

Tripp made a motion for the mayor to make plans and preparations to meet the conditional use requirements placed on the property. The motion passed with a 3-1 vote, with City Councilman Neil Critchlow opposed. City Councilwoman Jewel Allen was absent.

Marshall clarified that any development of the cemetery, including paving the road or installing a fence or buffers, would be completed through the city’s budget process.