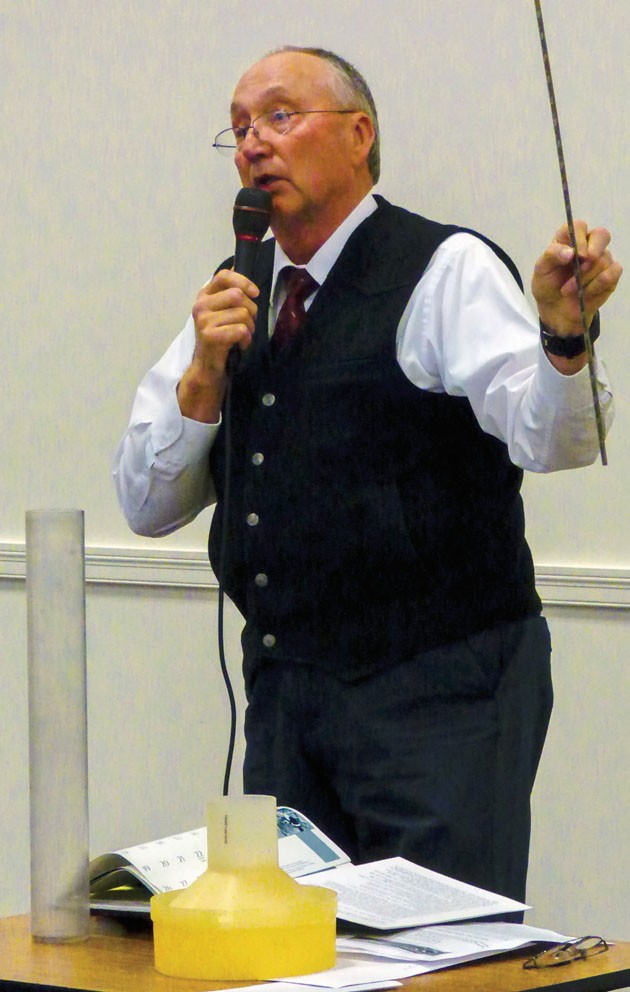 Ned Bevan, cooperative weather observer for the National Weather Service, demonstrates the various equipment and procedures that have allowed him, his parents and generations of the Bevan family to measure, observe and report weather conditions in Tooele on a volunteer basis for many decades.

In observation of this writer’s first birthday on March 27, 1949, Mother Nature blessed Tooele Valley with over 100 inches of snow in a single 24-hour period. Seems impossible, but it’s true. Ned Bevan’s father, Burdette, reported 100 inches plus, because 100 inches was the most his equipment would allow him to measure.

The snow was so deep that in spite of the best shoveling efforts, the Tooele Valley Railroad train between Warner Depot on the west and the International Smelter in the foothills on the east couldn’t get through, but instead was knocked off the tracks by the combination of wind and snow.

Snow melts into water, the lifeblood of our desert community, but including this once-in-a-lifetime storm, Tooele has only seen 2 inches or more of water fall in a 24-hour period eight times since 1896. The last time was this year on March 23. Even with all the March weather reported, April is still the wettest month of our weather year.

This fascinating statistic and many others were recalled by Ned Bevan on Thursday, April 6 at the monthly gathering of the Settlement Canyon Chapter of the Sons of Utah Pioneers. For example, did you know:

• Since 1896, there has only been a 3-month period when the weather wasn’t measured and recorded here in Tooele?

• Most of this time period has been handled by the Bevan family at 147 E. Main Street? Ned has recently moved the station to his home on West Utah Avenue, where he can be seen diligently measuring and reporting at 5 p.m. every day.

• The hottest month in Tooele was July 2013, when there were 16 days of 100-degree-plus temperatures, the toastiest being a sizzling 105 degrees? All other days in that month were over 90 degrees.

• The coldest temperature ever recorded had the thermometer in the deep freeze at minus-16 degrees on Dec. 23, 1990?

• This writer still couldn’t understand the difference between water and precipitation, but whatever that means, May 30, 2005, is the day we got the most in just a few hours?

• Snow and rain aren’t the only weather-related records set? In one 24-hour period, salt storms caused over 90 fires from electricity arcing over the salt-laden wires.

• Even Dwight D. Eisenhower had a keen interest in Tooele weather, observing for quite a period before deciding the best place to build the Tooele Army Depot, then called the Tooele Ordnance Depot?

This writer was going to say something about global warming, but thought that is better left to politicians, the only ones who claim to understand it. One of Bevan’s favorite sayings in trying to understand the weather is, “Everyone complains about the weather, but no one does anything about it,” courtesy of Mark Twain.

The younger sisters of past LDS Church President Gordon B. Hinckley’s wife Marjorie Pay will be our special presenters on Thursday, May 4. Come for a potluck dinner at 6:30 p.m. at the LDS building at 194 N. Pinehurst Ave. The Pay sisters’ presentation will follow dinner. It should be a fulfilling evening.

Darrell Smith is a member of the Sons of Utah Pioneers.