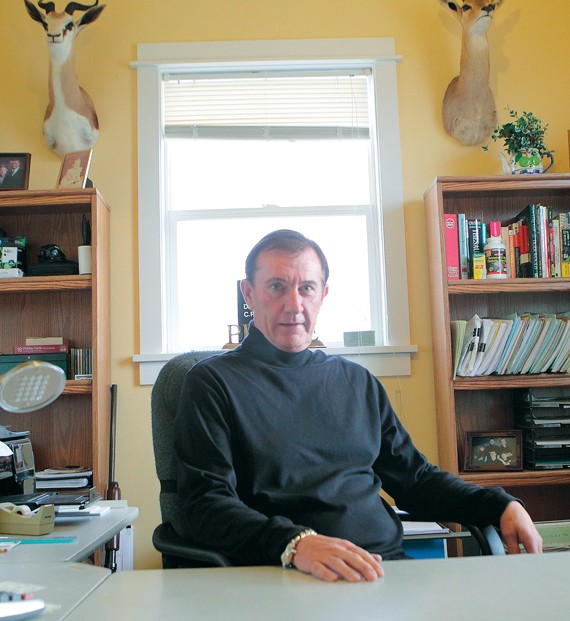 Drew Hall poses for a photo at his office in Overlake Friday afternoon. The Utah Supreme Court refused to hear Tooele City’s appeal in a lawsuit it lost to Hall’s development company Tooele Associates.

Tooele City has lost another attempt to stop a $20 million jury verdict from becoming final.

The Utah Supreme Court announced last Tuesday that it will not review an August ruling by the state Court of Appeals that reinstated a 2009 jury verdict against Tooele City. The verdict, rendered after a trial in 3rd District Court, awarded Overlake developer Tooele Associates $20.7 million in damages.

“We are not surprised,” said Drew Hall, managing partner of Tooele Associates. “The appellate court decision was well-crafted and supported in detail the jury verdict.”

The Supreme Court’s decision marks another milestone in a legal battle that began in 2002.

Attorneys for Tooele Associates argued in the 2009 trial that Tooele City breached the development agreement for the 3,000-acre Overlake subdivision on the northwest edge of Tooele. The jury awarded a net judgment of $20.7 million in damages to Tooele Associates. However, 3rd District Court Judge Randall Skanchy, who presided over the trial, issued a mistrial ruling in 2010, citing irreconcilable conflicts in the jury’s verdict.

Hall appealed the mistrial ruling, which led to the Court of Appeals decision in August to reinstate the jury’s verdict.

The Supreme Court’s decision is a not a meaningful setback to the city, and the city has not exhausted all legal avenues to overturn or reduce the judgment, according to Roger Baker, Tooele City attorney.

“The city believed that it was prudent to pursue an appeal to the Supreme Court. Because that appeal is no longer an option, the city will pursue its various options in the district court,” said Baker.

While the jury returned a verdict, that verdict is not binding until the judge that presided at the trial weighs in and enters a final judgment. The case will now go back to 3rd District Court where Judge Skanchy will enter a final judgment.

Final judgment will likely involve the judge calling in both parties to discuss the final ruling on the case and assigning one of the parties to write the ruling, according to Baker.

No timetable has been set for this process.

The city may still appeal the final judgment, Baker said.

Tooele City has spent $4.2 million defending itself against the lawsuit over the past seven years, according to records obtained from Tooele City under a Government Records and Management Act request.