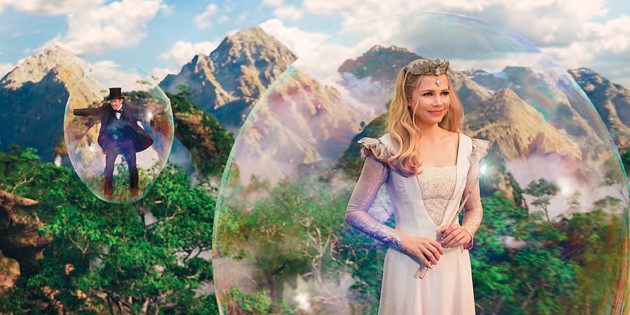 Everyone likes a good story about a hero.
Humanizing looks at a villain’s past are popular, too?
But a look into the background of a weak, ineffective character in only the final act of a beloved cinematic classic? That’s a new one.
So it is with “Oz the Great and Powerful,” which gives us a behind-the-scenes look at the Wonderful Wizard of Oz before he was such.
In the opening, sepia-toned scenes, we meet Oz (James Franco) as a womanizing, so-so magician employed by a traveling circus but with aspirations to be the next Harry Houdini.
During one show, though, a wheelchair-bound girl (Joey King) asks him to let her walk and the audience subsequently riots against Oz. He escapes to his trailer, only to be visited by a girl he really does love, Annie (Michelle Williams), who tells him she is engaged, and then chased by the beau of a fling. He escapes in a hot air balloon, but his short-lived reprieve ends when the balloon heads straight into a tornado.
Like Dorothy, he miraculously survives and finds himself in the vividly colored land of Oz (hey, that’s his name!). He is greeted by Theodora (Mila Kunis), a witch who tells him he has arrived to fulfill the prophecy of defeating the wicked witch who has plagued the land.
Oz is lukewarm of the prospect of defeating a wicked witch, but becomes more amenable to the idea once he sees the Emerald City and the kingly throne and hall of riches that Theodora and her sister, Evanora (Rachel Weisz), promise him for doing the deed.
He sets off for the place Evanora has told him he can find the wicked witch, accompanied by a flying monkey, Finley (Zach Braff), and a china girl (King again) he rescued. Once they get there, though, they meet Glinda (Williams again), and realize things aren’t quite so black-and-white as they’ve all been led to believe.
As with all good prequels, we get hints and teasers to the land, circumstances and people we’re all so familiar with from 1939’s “Wizard of Oz.” Here there are multi-colored horses, and there are the deadly poppy fields; Glinda still flies in a giant magical bubble, and most of the journey is taken with yellow bricks underfoot. We find out why the Wicked Witch of the West began to fly on a smoking broom, and how the Winkies, long the guards of the Emerald City, came to work for her. No ruby slippers here, though, because they’re copyrighted.
James Franco hits all the right notes as a con-man of a side-show magician hiding behind showmanship, bluster and adroit prestidigitation. Williams’ Glinda is sweet as candy but with strength and cunning underneath, while Kunis and Weisz give fairly nuanced performances, considering their roles. Braff is credible first as Oz’s circus assistant and later as a devoted flying monkey. He has the best lines of the whole show.
“Oz” is director Sam Raimi’s first PG-rated movie released in the country, but it never feels like it’s wearing kiddy gloves. Danny Elfman, in his first collaboration with Raimi since the two had a falling-out after “Spider-Man 2,” brings whimsy but uncharacteristic restraint to his score. Like in the first movie set in the land over the rainbow, Oz is dripping in rich-hued wonder and magic, but somehow feels less tangible than when we followed Dorothy through it.
Holding true to the PG rating, there is little violence, language or sensuality, though at times younger kids might find it a bit scary. What younger kids might notice more, though, is the length — at 130 minutes, the story amazingly doesn’t drag, but smaller children might get wiggly after a while, anyway.
There are already talks about Disney making a sequel to this prequel, and while more time spent in Oz can only be good, I hope that falls through. I can see how there could be more stories to tell, but given the nature of the wizard in “The Wizard of Oz,” and how we left him at the end of “Oz the Great and Powerful,” his character can only falter. And while everybody loves a good villain, we like seeing heroes succeed and rise more than we do the inevitable degradation of a mere mortal.