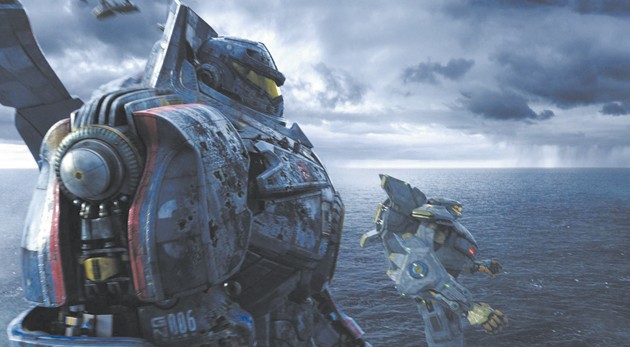 July 11, 2013
‘Pacific Rim’ beats its way through bad to be a monstrously fun film

The “Pacific Rim” preview has preceded every movie I’ve been to for the last two months, so I thought I had a pretty good idea of what to expect. Specifically, how bad it would be.

How wrong I was.

Yes, it was bad, but it was so much more than that — this movie is spectacularly awful.

The premise is this: In the near future, ginormous aliens have found their way to our planet via an inter-dimensional portal in a trench in the Pacific Ocean. These beasts, dubbed the “kaiju,” take too long to be taken down with conventional weapons, so the world’s military powers have pooled their resources to build equally ginormous robots, called “jaegers” to fight them.

The jaegers’ actions are controlled by brainwaves, but the strain is too much for one person to handle, so two pilots must work together. The level of cooperation required between the two pilots means they must be very compatible, and often are formed of sibling teams.

Such is the case with Raleigh (Charlie Hunnam) and Yancy (Diego Klattenhoff) Becket, brothers who are both fierce and just a little insubordinate. On one fateful mission, Yancy is killed by a kaiju, and Raleigh is somehow able to single-handedly get his jaeger back to safety. Stripped of his partner and scarred by the incident, Raleigh leaves the jaeger program and goes to work on one of the massive sea walls that is supposed to keep the kaiju out — until, five years later, he is found and re-recruited by his old commander, Stacker Pentecost (Idris Elba), who is gathering as many resources as possible for one final push of jaegers.

Raleigh wants Pentecost’s beautiful and brilliant assistant, Mako Mori (Rinko Kikuchi), for his new partner, but Pentecost balks, and some of the other pilots, including Herc (Max Martini) and Chuck (Robert Kazinsky), don’t think Raleigh’s up to the task. Meanwhile, two scientists, Newton Geiszler (Charlie Day) and Hermann Gottleib (Burn Gorman), are trying to find out more about the kaiju to give the few remaining jaegers some hope of defeating the beasts once and for all, and their research may require the help of a shady black-market dealer, Hannibal Chau (Ron Perlman).

And all of this makes sense in a universe where the technology exists to neurally connect people with enormous machines, but no one can think of any better way to fight the monsters than by punching them in the face. As you might expect, the testosterone in the theater is palpable. I heard three girls were spontaneously impregnated just by sitting there at the screening I went to.

But, Guillamo del Toro directed this, as well as co-wrote and co-produced it, and his fingerprints are obvious all over this thing. It took me about half of the movie, and then it hit me: everyone knows this is all kind of ridiculous. They all know. Everyone’s in on it. And that is the point. And it is brilliant.

It’s kind of like a supremely better written, produced, acted and funded version of a SyFy Original Movie, and I mean that in the best way because I love those. Except here there are no washed-up 80s pop or soap opera stars. But other than that, and the fact that the actors are all decent and the effects are great, they’re practically the same.

Some of my favorite moments: One construction worker turns to Raleigh as they’re viewing news footage of a kaiju crashing through one of the supposedly impenetrable sea walls and says, “That thing…i-it went through the wall like it was nothin’!” Or later, when the Hansens find their jaeger dead in the water facing a kaiju, Herc opens a compartment and takes something out. “What are you doing?” Chuck asks. “You and I are the only things standing between it and a city of 10 million people,” Herc says. “Now, either we sit here or we take these flare guns and do something really stupid.” And just after that, when Geiszler is hiding from a kaiju attack in a public bunker, he says, “This isn’t a refuge; it’s a buffet!”

I also scribbled down words or phrases as events developed on screen so I wouldn’t forget a single ridiculous, awesome moment. They include: bat wings, sword, Jurassic Park, shipping liner baseball bat, they have elbow rockets.

Seriously, if those don’t make you want to go see this at any cost, nothing will.

If you thought the only way either “Godzilla” or “Mighty Morphin Power Rangers” could be improved was by combining it with the other, this is the movie for you. If you thought “Independence Day” was great but thought the ending was a little too plausible, pencil this one in. If you loved “Man of Steel” but felt like there just weren’t enough explosions or buildings toppled, see this immediately. If you thought “Transformers” was OK but wished it had taken more time to discuss the philosophical implications of robot warfare…you might want to skip this.

“Pacific Rim” is an awful, terrible, ridiculous movie — and it’s fun. And I loved it. I am definitely seeing this one again.

Grade: D for quality / A for entertainment