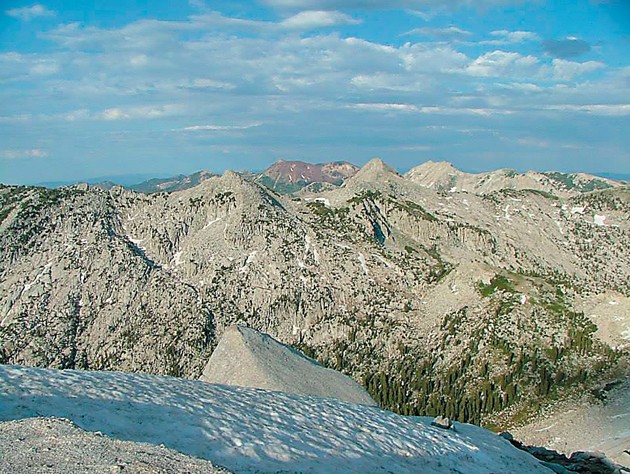 Standing on the summit of 11,253 foot-high Lone Peak is one of the top-10 experiences Jaromy Jessop has had in his life.

Standing on the summit of 11,253 foot-high Lone Peak is one of the top 10 experiences of my life.

I’ve seen and experienced a lot of interesting and awesome things, but even though this mountain is not the tallest one I’ve climbed, it was one of the most rewarding. In last week’s article (Part one), we left off with my friend, Paul, and I gazing at the 360-degree view from the summit of Lone Peak. That is where we will pick up the story.

It took me a long time to reach the summit. The heavy pack up to the second Hammongog in 90-plus degree weather took a lot of energy, so by the time I was made the last approach up to the south summit of Lone Peak, it was like a scene from the movie “The Dark Crystal” and I was one of the ancient “Skeksis” plodding slowly up the ridge.

Like I often say though, “I might not be the first one up to the summit, but I will make it and will never quit.” This day on the mountain proved no different. I sat there at over 11,000 feet above sea level on the backside of Lone Peak, and looked over Utah Valley with its cities and shining Utah Lake. I was proud of what I had accomplished.

I was going to be completely content with the south summit as the traverse over to the true summit looked ridiculous, but just then I saw Paul top out on the North Peak and he yelled, “Are you coming over?” I yelled back, “Do you think I can make it?” Paul, being the expert climber he is, stated that it was easy and I could do it. Yeah, easy for him I thought. Between the peaks, the connecting ridge was nothing more than a bunch of giant, closely grouped granite fingers that were broken and bent at the top with 1,000 foot drops on either side. I’m sure the description sounds ridiculous and that’s exactly what the ridge was.

Paul told me that the route didn’t go across the top of that mess but rather I needed to drop down 100 or so feet to the east on the Bells Canyon side of the ridge and that I could pick my way along the base of the giant fingers and then climb up the north summit stack to the top. When he said this I thought he was nuts because I’ve seen the east face of Lone Peak from the Bells Canyon side when I climbed the Little Matterhorn; it looked impossible from a distance. Even though I was a bit terrified, I had come this far and I was close to the top, so I decided to give it a shot.

It is hard to describe descending piled up broken boulders and blocks of granite while looking several thousand feet down onto a glacial boulder field with old snow banks and an impossibly dark blue lake. Sweat was beading out on my forehead and my heart was pounding as I clung to the rocks and inched my way along the cliff base that connected the peaks. One wrong move and it was curtains for me. I finally made my way across the connecting ridge and I was at the base of the north peak. Only a few hundred feet of elevation stood between me and the true summit. From here I just trusted good hand and foot holds and stared at the rock, relying on upper body strength to pull myself up.

The last boulder before you reach the summit merits description again. I had met a couple on the ridge before the south peak and the man told me that he had gotten within three feet of the summit, but didn’t dare climb over the “boulder.” I thought to myself, hiking all that way only to fail three feet from the top! But as I clung to the peak looking west at the boulder on top of the world, I understood why someone might turn back at this point — and feel good about it.

This somewhat square chunk of rock is perched right on the summit but a few feet shy of the actual highpoint. It is tilted precariously to the west and you have to climb up over it from the east. There are death falls of hundreds of feet straight down on either side so a mistake here would be your last. Paul had been exploring another point to the north, but he came back and I watched him negotiate the boulder.

I decided not to think about it or look at anything but the rock in front of me. In short order, I was past the obstacle and stood on the golden USGS summit marker. I did it! I was on top of Lone Peak! Granted, it took me forever. It was now after 7 p.m. and the peaks were turning purple and gold from the sunset, but I didn’t care; I just took in the view.

Magnificent, jagged, snow strewn peaks of the central Wasatch Range were all jumbled together to the east, and 11,749 foot-high Mount Timpanogos stood boldly above the Orem/Provo area to the south. The cities and communities of Salt Lake Valley were far below to the west with the Oquirrh Mountains behind and the incredible Big Cottonwood Ridge, crowned by the 11,330 foot-high Broads Fork Twin Peaks, completed the view to the north.

I got on my stomach and edged myself over to where I could see down into the incredible cirque that this mountain is famous for. I noticed several professional climbers attacking the “Question Mark Wall,” which is a famous Class V route up a sub peak of this mountain. I don’t know that I will ever do anything like that, but these climbers were impressive and looked like ants against the giant vertical wall.  We admired the view for a bit longer and then as daylight faded, we began our descent. I told Paul not to outrun me on the connecting ridge cause I didn’t feel too confident about it. Going down was worse than coming up, because you were looking straight down into the bowl.

Even during this frightening time, I stopped to admire a beautiful alpine flower that was hot pink with dark green leaves. Amazing how some things in nature find a way to survive even in the shortest growing seasons and most difficult climates. I finally reached the south summit and then it was just a matter of putting yourself on auto pilot for the next 2.5 hours across boulder fields, over small streams and through scrubby trees back to the trail and then hike back to camp.

By the time we reached the trail it was dark, but there was some illumination from the moon, so I opted not to use a flash light and made the last mile back to camp in the dark. I find that after awhile your eyes adjust to the available light. If I were to use a flashlight, I would see clearly what was immediately in front of me, but I would be totally blind outside its sphere of illumination.

Once back at camp, we realized that we were not far from where a fatal bear attack occurred because some people didn’t properly clean up their camp and store their food. This was an unpleasant realization in the moonlit pines, so we gathered up every shred of food material and took it a good 100 meters away from our camp and hung it in a tree. Not sure what good that does because bears are climbing fools. It is frightening how fast they can climb trees, but anyway, it seemed like the thing to do. There was no danger of rain and I didn’t have a tent anyhow so I slept on the ground and  looked across the Hammongog meadow and watched the moon cast shadows on the boulders through the pines.

Paul stated that he somehow felt safer in his tent, but I knew his tent was no obstacle for bears; it just trapped him from any possible escape or resistance, I thought. I put my Kbar knife under my pillow and dozed off hoping for the best.

Morning came without incident and by 6 a.m. we were packed up and on the trail. We were off the mountain by 8 a.m. This incredible peak is something that should not be missed by persons who are physically and mentally capable of its challenge. For more information visit the following website http://www.summitpost.org/lone-peak/151267. Go prepared and follow all high mountain safety practices, the most important of which is to know your limits.

The route described in this article is the “Schoolhouse Springs / Alpine” approach.

Jessop grew up exploring the mountains and deserts of Utah. He has a bachelor’s degree in Geography from the University of Utah, and has traveled to all 50 states, U.S. Territories and a dozen foreign countries. He, his wife and daughter live in Stansbury Park. Follow him on  (JD Jessop) for more hikes and travels.