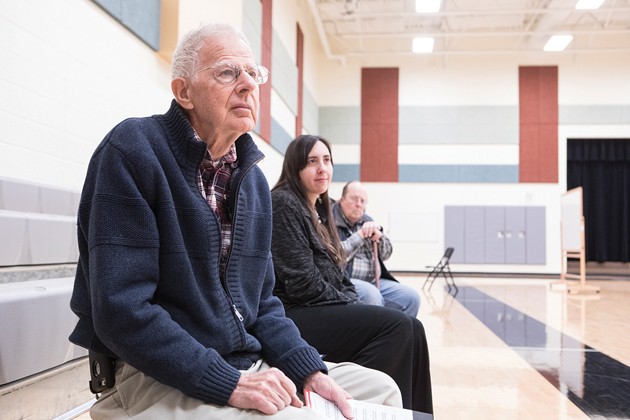 Kay Reese listens to the Tooele City precinct 1 chairman Philip Parish during a Republican caucus meeting in February 2018. The Republican and Democratic parties have either postponed or canceled caucus meetings for 2020.

County and state conventions will use an electronic format ♦

Tooele County Democrats and Republicans will not caucus on March 24.

In light of the COVID-19 pandemic and announcements to limit gatherings to groups no larger than 10, both the Democratic and Republican parties statewide have announced that their neighborhood caucus meetings scheduled for March 24 have been canceled.

Normally, voters identifying with either the Democratic or Republican Party would gather in separate groups on March 24, according to their voting precinct. Each precinct would elect delegates to their party’s county convention where the delegates would nominate candidates for the various elected offices.

For the Democrats, all current precinct officers will have the opportunity to remain in their roles for another two-year term, according to Mike Keil, Tooele County Democratic Party Chairman.

“More work needs to be done to confirm all the logistics and the details, but the event will likely take the form of a phone or video conference,” said Keil. “More details will follow as the date approaches.”

For Republicans, a statement from their state party chairman, Derek Brown, reads: “In light of the recommendations by state health officials and our Governor, the Utah Republican Party will comply with this directive and postpone our March 24 caucus night meetings.”

“We want to make sure that our precincts are well covered, and our candidates are getting to communicate with their voters,” Crowley-Rabanne said.

County Republicans are also considering a virtual county convention, according to Crowley-Rabanne.

“We are also working closely with the state and their plan to host our 2020 convention in a virtual manner,” she said. “As of right now, we are still making plans for our county convention to take place on April 23, however, we haven’t decided exactly which method we will use to execute it.”