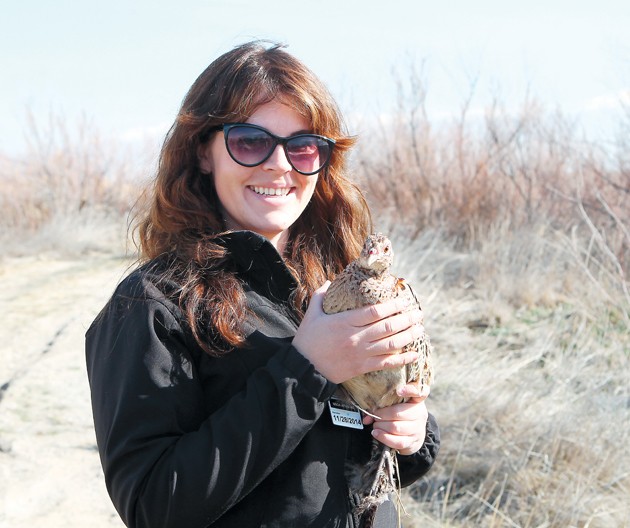 Maegan Burr holds a hen pheasant during a recent interview at the Salt Lake International Airport. Tooele Transcript-Bulletin photographer Maegan Burr will be leaving for another job at the end of next week.

I am going to tell you a secret: the writers at the Tooele Transcript-Bulletin hate writing this column. Journalists in general do not like writing about themselves; they would rather ask questions than write about how they spent their weekend.

Photographers are worse. We hide behind cameras and are good at changing the subject onto other people or things. Every time one of our reporters suggested that I write for the column, I would remind them that I planned to write only one — my farewell column. So here it is!

In a week I will leave the Transcript-Bulletin and change the trajectory path of my life. While I plan on continuing to shoot photos, I don’t plan on it being a full-time pursuit. I have loved my time as a photographer for the Transcript and I am grateful for all of the experiences.

When I found out that I would have to fulfill my promise to write this column, there were many different angles I could have taken. My first idea was to publish all of the different things that people tell me “off the record.” That would be satisfactory but would probably get my house egged. So I will save these little pieces of gold until I move out of the county, or get a book deal that in turn could help me go into hiding in another state.

My second idea was to dispense all of the helpful hints that I learned over my seven years at the Transcript. I have been given a lot of advice. This too could end up being a book, so I will just give you the highlights. First, don’t get hit by cows. I did once. It was one of the first rodeos that I covered and it was during the children’s money cow event. The cow swerved, so did I and BAM! Cows hurt.

Second, if you have a cause that you are advocating, do your research. Time and time again, I have been at community meetings where someone is asking for a change of some ordinance, or a complete 180 on a projected plan, and they haven’t looked into what the council has already done.

The council will smile and nod, but will take you more seriously if you’re up to speed on the project you’re talking about. Check the Transcript’s archives first; chances are a reporter has already done a lot of work on the issue you’re just learning about. And lastly, Tooele County has some of the most interesting elderly citizens. Listen to them. I have had the chance to chat with 80-year-old ranchers in Vernon, WWII veterans in Stockton, and countless interesting folks at the one and only Grantsville Old Folks Sociable.

I could have made an extensive list of all the projects or photos that I have not taken yet, or that were shut down by editors. The first one that comes to mind was getting my friend’s golden retriever, Toby, in the paper. I never could figure out a way, other than mentioning him in this column. So I’d say debt paid.

One of my other ideas was to do an entire photo page on cats. They have taken over the Internet, so why not give them a photo page? Dave Bern, editor, shot this idea down. Well, so did former editor Jeff Barrus. The idea that I still hold on to that someday might work is a New York Times style fashion page— but in Tooele County! Just think of all of the different kinds of plaid and camouflage this could show!

The fourth idea was given to me by Lisa Christensen, who has mentioned me in her Out and About Columns before. She reminded me that I have been mentioned in every other writer’s column, so I should definitely repay the favor. She was wrong; I have not been mentioned in Mark Watson’s columns. What’s up with that, Watson? Skyler Cloward gets a mention but not me?

Lisa and I have had many adventures. We have worked 20 hour shifts traipsing through Wendover with various police. We have also covered Tooele County’s own Burning Man, an event neither of us can forget — no matter how hard we try.

Rachel Madison is one of the calmest people I have ever met. This says a lot. She works with the Bulletin Board people and Hometown section writers who can be notoriously deadline adhering impaired. Her calmness is a necessity in any workplace and she is great to be around. Tim Gillie is always my go-to person to talk to if I have a question about anything in the county. He’s covered all of the major municipalities during his time at the Transcript, and unfortunately for him, it has always been at a time of major change or controversy for the city or county. One day Tim, you will get the Ophir town beat or some other municipality that is not on the brink of crisis.

Richard Briggs, I hardly knew ye. What I do know is that he’s a pretty good guy. He even likes hockey, which is my favorite sport, so he cannot be all that bad. My editors Mark Watson and Dave Bern are great bosses and great people to work for. Mark and Dave both share the great trait of seeing the best in everyone.

I cannot forget the people who have left before me who taught me so much, like Editor Jeff Barrus and Photo Editor Troy Boman who taught me literally everything that I needed to know at newspapers. I started out as a girl with a camera and I am leaving as an award-winning photojournalist. Thank you.