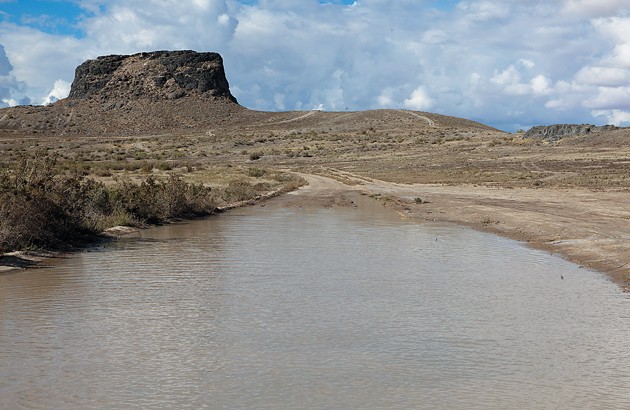 Emergency responders pulled about 200 party-goers out of Skull Valley’s thick alkaline mud after the young adults had gotten their cars stuck during heavy rains in the area Friday night.

Bucky Whitehouse, director of Tooele County Emergency Management, said Tooele County Dispatch began getting phone calls from people whose cars had become mired in the valley at about 3:15 a.m. Saturday when trying to leave a party near Lone Rock.

Enough rain had fallen by the time the party broke up that the road attendees had used to get to the party site was no longer fit for travel back to SR-196.

“Their reason for calling was they were stuck several miles away from the road and had no ability to get themselves or their vehicles back to the main road,” Whitehouse said. “When the individuals decided to leave and they couldn’t get back to the main road, they began looking for alternate routes, and some made it several miles in other directions.”

He said an estimated 30 to 40 cars were scattered about eight miles from the original party site, and some vehicles were as much as five miles apart.

“That’s just an indication that they were searching for roads and a way to get out of them,” Whitehouse said. “Unfortunately some of them started heading in the wrong direction and went to Delle instead of back towards Grantsville, which took them farther away, because they were unaware of where they were. For those vehicles that far out, it’s unknown how long it will be before they can get them.”

Some vehicles made it to the marshy area of the valley before becoming stuck, and many got into water and mud above the axle line, he said. One Jeep had fallen on its side. Because the cars were so scattered and difficult for first responders to find, especially in the dark pre-dawn hours, dispatchers told drivers to flash their headlights to help guide searchers to them.

After being rescued, party goers were kept in a pair of school buses brought out by the Tooele County School District to shield them from the elements until they could find other means of transportation home. Whitehouse said the approximately 200 people, ranging in age from 18 to 30 and hailing from Salt Lake to Idaho, were also checked out by medical personnel. None had any significant injuries, he said, though some were still inebriated.

Whitehouse said responders worked from about 3:30 a.m. to 3 p.m. before finding all known attendees. Tow trucks also came early into the process, he said, but the ground was too wet to allow them to collect the stuck vehicles.

On Sunday and Monday the ground had dried enough to allow trucks to begin dragging most vehicles to at least a central collection point to start hauling them out, though the process would likely take multiple days, he said.

How the party goers were associated, or who organized the gathering, is still unknown, and is one of the questions investigators have at the forefront of their inquiry.

“It was very difficult to piece that together, if they were friends or if they’d seen it from an ad,” Whitehouse said. “We asked and we did not get a lot of direct answers to our questions. From what I understand, the sheriff’s deputies and the forest service for the BLM, they are all investigating the situation, and if they can determine who the individual is who organized the party, that individual might be cited for having the party without notice or permitting that they were going to be there.”