January 15, 2013
Past Tooele councilwoman was community-minded

DeLaMare passed away Sunday in Tooele at the age of 86. Born in Grantsville, DeLaMare graduated from Tooele High School and then attended the University of Utah and Henagers Business College, and became a stenographer. After accompanying her husband, Jay, to dental school in Ohio, the DeLaMares returned to Tooele in 1955. 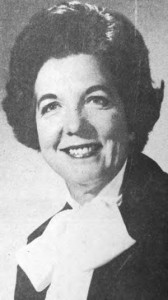 When running for Tooele City Council in 1977, DeLaMare partially ran her campaign on the basis that having a woman’s perspective on the city council would be beneficial to the city and the council’s governmental processes. Once elected, DeLaMare gave that perspective for 20 years, as well as serving on the Tooele County Board of Health from 1987 to 1995.

George Diehl, who served as mayor of Tooele City from 1983 to 1994, said he was sorry to hear of the passing of the former council member. He described her as passionate and dedicated to serving the city she called home.

“I think I would sum it up by saying she was communityminded and very interested in promoting community activities and park recreation, and working with the public to get their input,” he said.

Diehl said beyond being focused on community service, DeLaMare had a reputation of cooperation with city officials, other council members and private citizens alike.

“She had excellent rapport with other council members, and she was a team worker, and she related well with the public,” Diehl said. “She enjoyed serving the public. She was constantly inviting their comments, and working with the public to get their input.”

Tooele City Mayor Patrick Dunlavy, who was city recorder during DeLaMare’s time on the council, said she was careful to learn about issues to be discussed in council meetings beforehand, including asking community members for their thoughts so that she was prepared to discuss them intelligently. When city employees needed the assistance of a council member, Dunlavy said, DeLaMare was always available and willing to help. Everyone she worked with had a great deal of respect for her, added the mayor.

Although part of her initial campaign was to lend a woman’s perspective to city issues, Dunlavy said DeLaMare’s focus was always on what was best for the city overall — not just for the women in it.

“It’s difficult to measure what effect she had as a woman. Certainly she brought a woman’s perspective to the issues of the council, but Colleen was always about what was best for the city,” he said. “She was always very cognizant of that.”

A viewing will be held on Friday at the Tooele South Stake Center, 1025 Southwest Drive, beginning at 10 a.m., with a funeral following at noon. DeLaMare will be interred at the Tooele City Cemetery.