Much is to be learned from Trish McArthur.

The youngest resident at Rocky Mountain Care Center, a place whose most common residents boast white hair and wrinkles telling of a long life lived, McArthur, 30, has called the center home for six years, and despite all never ceases to stop smiling.

“You can’t leave her side without thinking you have no problems at all,” said Paul Ogilvie, Rocky Mountain Care administrator.

“Her head was bigger than normal and she started developing what’s called sunset eyes,” Diane said. “So we took her in to be checked.”

The startling diagnosis: cancer. More specifically a megablastoma affecting the back base portion of her brain. The presence of such should have been extremely painful, but McArthur, as she is now, and as she always has been, was calm and just cooed at doctors.

“The medical staff was amazed by her because she never cried,” Diane said. “She was just always so happy and bubbly.”

The finding led to invasive surgery to remove the malignancy at the tender age of 5 months.

“It was terrifying,” Diane said. “We were never prepared for any of it. We were babies ourselves. We did what we had to and just carried on. It was her that sustained us. She’s always been so happy.”

Surgery went well and after a long hospital stay, McArthur came home and surprised doctors by resuming and continuing to live a fairly normal life.

“When they first removed her tumor the chances of the cancer spreading to her spine were very high,” Diane said. “She didn’t have a bright outlook at first, but she’s beat it all.”

McArthur has remained cancer free. She began school at the age of 2, with the help of a walker to get around, but soon didn’t need it.

“She was always very bright, too bright for her own britches,” Diane said. “She could rattle off 30 state capitals at the age of 2. She wasn’t always the perfect child. She got into a lot of mischief too. She lived a pretty normal life.”

She graduated from high school, attended Salt Lake Community College, lived on her own and worked a few jobs locally. Twenty years of wear and tear on a weakened spine, however, took it’s toll when McArthur reached 24.

“She had to go in an have a massive surgery to clean all [the scar tissue] out and it just didn’t work,” Diane said. “They tried their hardest. She’s had the best neurosurgeon in the state, but this is just the way it is.”

The surgery left McArthur a quadriplegic, and yet McArthur harbors no ill feelings about the situation. She speaks of the trials she experienced in her short life very matter-of-factly and openly.

“What’s our saying Trish?” Matt steps in quickly helping her oxygen-aided respiratory system rest from all the questions. “It is what it is.” 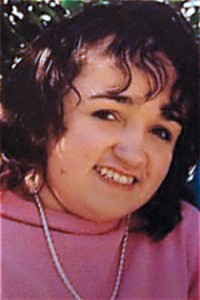 Patricia McArthur carried on with a normal life as long as she could until she needed more surgery at the age of 24.

McArthur’s faith keeps her positive. A life-long member of St. Marguerite Catholic Parish, she hasn’t stopped attending mass. The crowd is smaller and the location different, but the message is still the same. It’s a message of hope and peace that keeps McArthur faithful.

Such faithfulness was noticed this October by the Catholic Diocese. In a special ceremony McArthur was awarded the state’s first-ever Catholics Do Award, an award dedicated to a person who is disabled, yet believes and serves within his or her faith.

The award sits prominently near the door of her room for all to see. Near her bed are framed pictures of Jesus Christ, who had a cross to bear, just as she has. They give her power and strength to carry on each day. Daily visits from family and friends, musical competition television shows, in-house entertainment , and of course football keep her smiling too.

She said her friends at Rocky Mountain have taught her a lot about life, but it’s easy to see that she does that and more without saying anything at all. Her genuine smile and the honest and sweet look in her eyes tell of perseverance, optimism and strength to find happiness regardless of what life brings.

“The doctors have done all that they can for her at this point,” Diane said. “We just live each day the best we can and be happy about it. She’s kept us all very humble. She makes us appreciate life a lot more.”