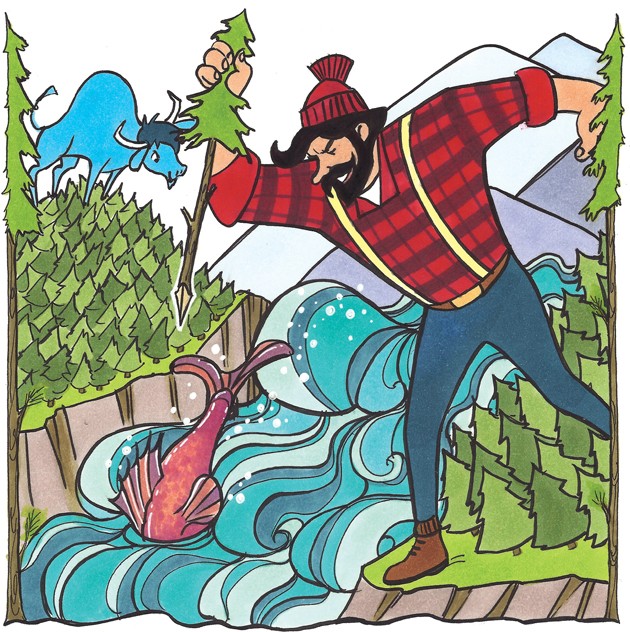 It happened a long time ago, a time when Mount Rainier was only a hole in the ground, and the land to the west of the Rocky Mountains was just one big, mighty sea. It was early morning. Paul Bunyan walked down from the logging camp to sit by the sea and fish for steelhead salmon. Those salmon were his favorite — he could never get enough. And he could fish like nobody else, for his fishing rod was miles long.

He sat on the bank and cast that rod, and pretty soon he landed some small ones. That was fine, but Paul Bunyan needed to catch some big fish, so he stayed and stayed. At long last, toward day’s end, he hooked a real beauty. The thing is, though, that one was so big that from the moment he had hooked the creature it was a fight.

Paul loved fights like this. The light line pulled back and forth, and the water foamed, and the big fish raged out to sea, pulling back and forth. Paul and that fish tugged until the sun had set, but the fight went on. The stars came out, and a fat, full moon rose, and Paul sensed that the fish was giving up.

Sweat burst out on Paul’s forehead, drops so big that fell so fast, some people walking nearby thought they’d been caught in a rainstorm.

But Paul was dreaming of winning this battle, imagining that fish cooking over a fire as the moon began to set, and the morning star rose. Paul was still tugging and yanking and sweating and muttering. “I’ve got it,” he said with one last yank. He was ready to reach out and grasp his prize.

But that fish had grown wondrously wise, and instead of giving up, it pulled toward a waterlogged pine near the shore. It flipped and flapped until the fishing line was twisted around the broken branches, and as Paul saw his line unraveling, he knew he was in trouble. That made him so angry that, with one quick burst, he pulled as hard as he could.

The line broke, and limp as a rag doll, Paul fell back onto the shore. “How did that fish win?” he thundered, his voice so loud, the pines around him shook.

He thought he must have slept awhile, because when he next opened his eyes, the sun was high in the sky. He dragged himself back to the camp.

And all that day and into the night, he lay on his bunk and dreamed about returning to those waters and catching that fish.

He returned the next morning, and the next, and the next. For weeks, he fished those beautiful waters. He didn’t care if the day was hot and sunny or if there was a thunderstorm; he was determined. He tried a thousand different spots onshore. He used 500 different lures. And every evening at sunset, he saw his dream fish rising out of the water, showing off his beauty, teasing, dancing, taunting, diving. And every evening Paul called, “Just wait, I’ll get you!”

After a while, it seemed to Paul like that fish was laughing at him, and that made him more mad. Each night, when he fell asleep, he dreamed of that fish. His dreams woke him in the middle of the night, and he’d toss and turn and cry, “I must catch that fish!”

Finally, he knew there was just one thing left. He would drain the sea right through the Cascade Mountains! That’s right. That’s what he’d do. And that night, at supper, he would grill that fish on Slim’s gigantic griddle, the one so wide from side to side that it took 50 men with pork rinds tied to their feet, skating around, to grease it.

So Paul harnessed his big blue ox, Babe, and he shoved Babe forward, toward the mountain. “Go on now,” he called. Babe took a turn around that mountain and almost pulled it loose from the ground, but instead of pulling it out completely, he pulled the Cascade Mountain Range in half. When he did that, all the waters began to tumble through the crack.

Paul knew just what to do. He stood near that crack and watched those tumbling waters. And he held a fishing spear high in the air, ready to pounce on that fish when it poured through. And that’s just what happened. At long last, that fish came tumbling through the crack in those mountains, and Paul captured his prize. That night, all the loggers in the camp had fish for supper. And ever since that day, the Columbia River rages through that crack right where Paul Bunyan and his blue ox broke those mountains.

No one was surprised by this back then — after all, Paul Bunyan had already built the Puget Sound, and once, on a spree, he dug the Strait of Bering to drain the Arctic Sea. Some say this isn’t true, but Paul’s scribe, Johnny Inkslinger, wrote it down — or maybe the story came from one logger telling it to another and another, until it grew into a great big fish tale.