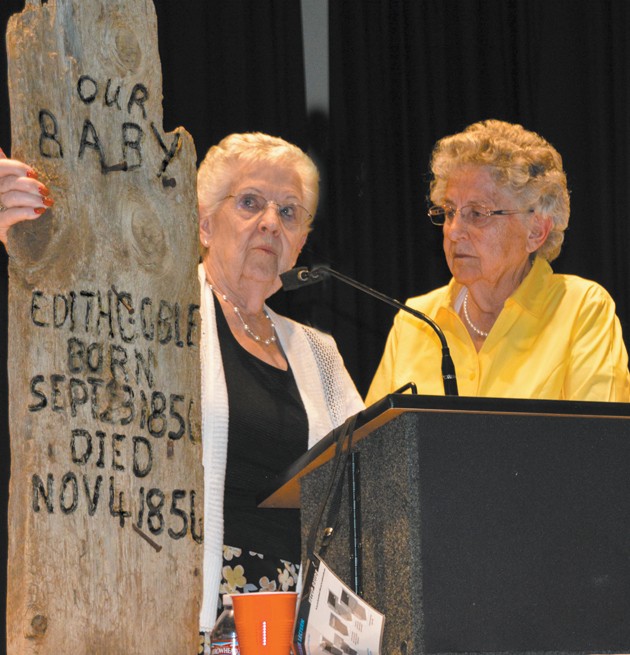 Doreen Pay Lloyd and JoAnn Pay Baird, younger sisters of Marjorie Pay Hinckley and wife of former LDS President Gordon B. Hinckley, display the grave marker of their ancestor Edith Goble. Edith, like so many others, died in 1856 crossing the plains to get to Utah.

On Thursday, May 4, the Pay Sisters, sisters to Marjorie Pay Hinckley, the wife of deceased President Gordon B. Hinckley of the Church of Jesus Christ of Latter-day Saints, enthralled locals with pioneer stories.

The sisters shared many inspirational stories of their pioneer ancestors with the monthly gathering of the Settlement Canyon Chapter of the Sons of Utah Pioneers. One story was how these sisters came to be in possession of the old wooden grave marker of their grandmother’s sister, Edith Goble, who died at 6 weeks of age, and was buried at the Last Crossing of the Sweetwater River during that fateful 1856 year.

In the Goble family, three children and their mother died in this gallant effort.  When the four remaining members of the family finally reached the Salt Lake Valley on December 11, 1856, three of them had frozen feet and they faced having their limbs amputated.

Three years after entering the Valley, Mary Goble married Richard Pay, in Nephi and together they had 13 children.  The last of these 13, was a son who would become the father to Marjorie, Doreen and JoAnn Pay.

Mary Goble was one of the three surviving members of her family who finished the trip on frozen feet. Back in Wyoming, she had accompanied another woman of the company to find some fresh water for her mother who was very sick with her last pregnancy.

In order to reach the spring of fresh water, they had to push through snow up to their knees.  When they found the spring, an older gentleman was lying there, close to death. Mary’s companion offered to stay and nurse the dying man if Mary would go back to camp and bring help.

In the process, Mary became disoriented and ended up plodding through the snow hour after hour. It wasn’t until 11 p.m. that the search party finally located her.  She was given all the treatment for frozen feet known to them at the time, but to no avail.

Several weeks later, she was finally able to see a doctor after arriving in Salt Lake City. The doctor counseled that her feet needed to amputated.  President Brigham Young contradicted the doctor and instructed him to remove her toes only. The doctor did as he was told, but warned that it would eventually mean removing more of her legs, or even death if they didn’t amputate both feet now.

It was a very painful and trying several years, but in the end, her feet completely healed, and as stated above, she married and went on to give birth to 13 children and lived into her 70s.

The burial marker pictured above is that of Mary’s little sister who was born just a few days after Mary had her feet frozen while looking for the fresh water for her then pregnant mother. The little baby Edith, who is named on the burial marker, only lived six weeks and was one of the many buried at the Sixth Crossing of the Sweetwater River.

Edith and Mary’s father fashioned this marker from part of a covered wagon, and burned her name and other information on it with a heated piece of metal.  Edith was buried, but not actively remembered for well over 100 years.

The Pay sisters received a call from a church member in Lava, Idaho. Their neighbor had been up hunting in the mountains around Lava, and found this old marker. Since the neighbor knew that the people who finally called the Pay Sisters were members of the LDS Church, they gave the marker to them.

The story of the Pay sisters finally receiving this unknown marker is a series of other miracles surrounding the Goble and Pay families. Rather than put the marker in a museum, they have spent their time telling this inspirational story, and sharing this etched piece of pioneer wagon with all who ask to hear their history.

Maybe one day they will find out how this burial marker put on a grave in Wyoming, ended up in the Mountains of Idaho. Another miracle?

The local chapter of the Sons of Utah Pioneers meets the first Thursday of every month for food, friendship and fascinating presentations.  On June 1, dinner starts at 6:30 p.m., followed by a presentation of the history of the Grantsville area before the settlement of the Mormon Pioneers.

The guest presenter will be Craig Anderson, newly elected president of the Grantsville’s Twenty Wells Chapter of the Sons of Utah Pioneers. Bring a potluck item and come join us at the LDS chapel on the corner of Pinehurst and Utah Avenues in Tooele.

Darrell Smith volunteers time as the publicity director of the Sons of Utah Pioneers Settlement Canyon Chapter. He also works as a docent at the Tooele Pioneer Museum. Smith can be reached at smithdar1948@gmail.com.