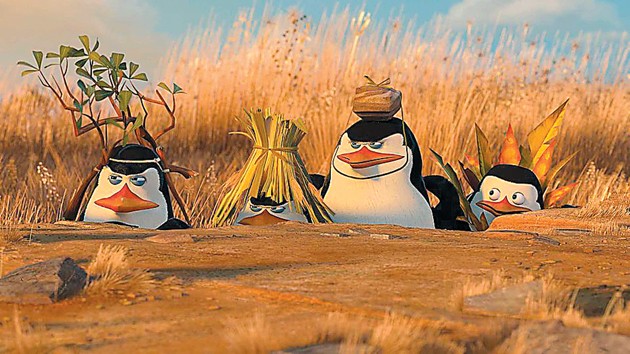 Scheming prenguins Kowolski, Rico, the Skipper and Private are back in a full-length film that keeps their madcap antics both fresh and entertaining. Image Courtesy of Dreamworks Pictures

November 26, 2014
‘Penguins of Madagascar’ is worth it to see the most adorable spy team ever on screen

Everyone knows the penguins are the best part of the “Madagascar” franchise.

At the same time, the idea of giving even highly entertaining supporting characters, even ones who held their own in a television series, is tantamount to suggesting, say, the minions from “Despicable Me” getting their own movie.

In the middle of a heist of Fort Knox (to steal the last reserve of tragically discontinued Cheesy Dibbles), the penguins are abducted and taken to a secret lab, where they are met by the mysterious Dr. Octavious Brine, also known as Dave (voiced by John Malkovich). Dave tells the penguins he is seeking revenge for them being cuter than he at the zoo and will wreak his revenge with his Medusa Serum.

Before finding out exactly what the Medusa Serum does, the penguins escape — aided, much to their chagrin, by NorthWind, an intelligence group made up of Arctic creatures: Classified (voiced by Benedict Cumberpatch), Short Fuse (voiced by Ken Jeong), Eva (voiced by Annet Mahendru) and Corporal (voiced by Peter Stormare).

NorthWind wants to arrest Dave for his various crimes against animalkind, but the penguins want to help the members of their species who have been disappearing from zoos around the globe. The two groups quickly find themselves at odds, and must try to find a way to work together for the good of all penguinkind.

The same quick-fire jokes that gave fuel to “Madagascar” are in full force here, and the formula holds true even stretched over an hour and a half. The humor is, as you’d expect, on the silly side, but hey, what can you do when your target audience is still losing teeth?

That being said, it’s still darn funny. Between the penguins’ steady stream of wisecracks, the delightfully ridiculous plot and Dave’s wealth of celebrity name puns (“Helen! Hunt them down,” he orders one underling. “Drew! Barry! More power!” he commands others), I couldn’t help giggling.

On the other hand, the plot unfortunately echoes some notes of “Despicable Me 2.” I don’t want to give anything away, but there was definitely a sense of deja vu toward the end. And the solution to the final conflict is, I thought, a tad on the weird side.

But odds are, your kids won’t care. Heck, you probably won’t care. “Penguins of Madagascar” has more than enough going for it to make up for little missteps, and it’s well worth the time for any fans of the most adorable spy team ever to hit the big screen.

Oh, and make sure to stay through the first part of the credits. There’s another little scene that does change the end a little bit, in a good way, so stick around for that.