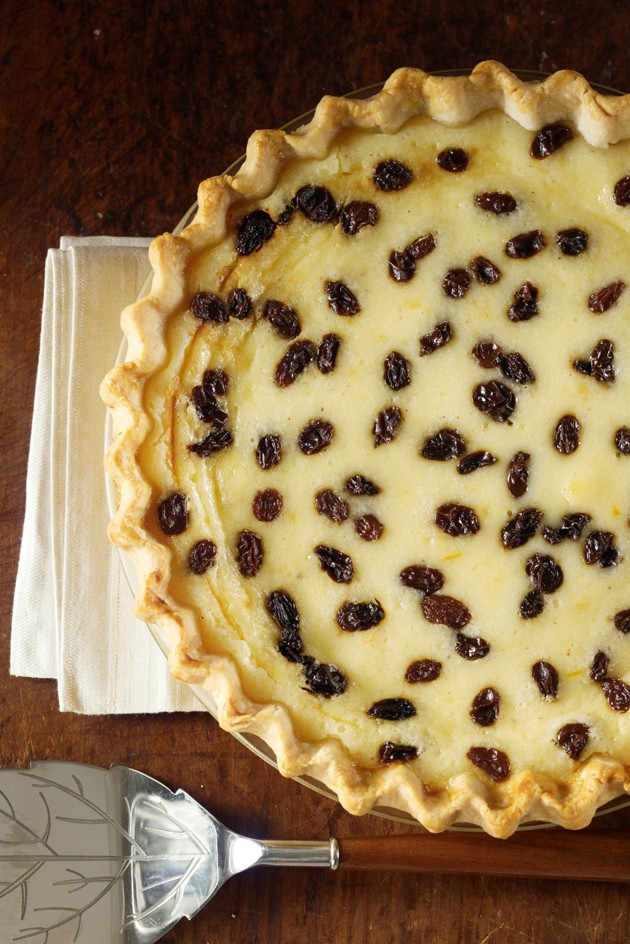 Before stepping into the kitchen to make Sour Cream Raisin Pie, we decided to telephone P.J. Hamel at the King Arthur flour company in Norwich, Vt., for pie baking tips. Hamel, senior writer and editor for the company since 1990, has baked hundreds of pies. She swears by every recipe that comes out of the King Arthur test kitchen and has been known to bake a single pie six times before she’s satisfied.

Our primary interest in making the call was to talk about Sour Cream Raisin Pie, an adaptation of the Pennsylvania Dutch Raisin Pie called Funeral Pie, served at funerals, and a Midwestern custard pie with sour cream. As often happens when the subject is pies, the conversation quickly turned to making flaky crusts, a perennial problem for even the most experienced home bakers.

To make a flaky crust, it helps to understand what happens when a pie bakes. The fat, which is cut into the flour, coats the flour. As the fat melts, the flour forms flakes or layers, and the spaces left by the melted fat separate the flakes. To prevent the fat from melting before the flour network has a chance to set, the fat should be cold. Cutting the fat into pea-size pieces and chilling the crust before baking also promote flakiness.

Cooks have been so intimated by warnings to avoid adding too much water, they don’t add enough and end up struggling with dry and crumbly mixtures that are impossible to roll. Hamel recommends adding the amount of water called for and an extra tablespoon. If the pastry is too moist, the flour on the rolling board will absorb the extra liquid. Hamel has one last tip. Don’t cut into a hot pie, she says. It will be “a lava flow.”

1. To prepare piecrust, stir together flour and salt in a large bowl. Add cold butter pieces and work into flour using a pastry blender or two knives. Add shortening and work into flour. Combine ice water and vinegar in a small cup. Add to flour mixture, about 1 tablespoon at a time, while tossing with a fork. Continue mixing until dough just gathers into a ball. Flatten into a 1-inch-thick disk, wrap tightly in plastic wrap, and refrigerate about 2 hours. Roll dough on a lightly floured surface into an 11-inch circle and fit into a 9-inch pie plate (ovenproof glass preferable). Crimp edges.
2. Preheat oven to 375F.
2. To prepare filling, beat eggs in a medium bowl; brush rim of pie crust with 1 teaspoon beaten egg. To remaining egg, add sugar, orange rind, nutmeg and sour cream; beat until evenly blended.
3. Sprinkle 1 cup raisins over bottom of piecrust; pour sour cream mixture over top. Sprinkle remaining 1/2 cup raisins on top. Bake 30 minutes or until filling is set. The filling puffs up as it bakes and settles as it cools. Let cool on a wire rack. Serve with whipped cream, if using. Serves 8.