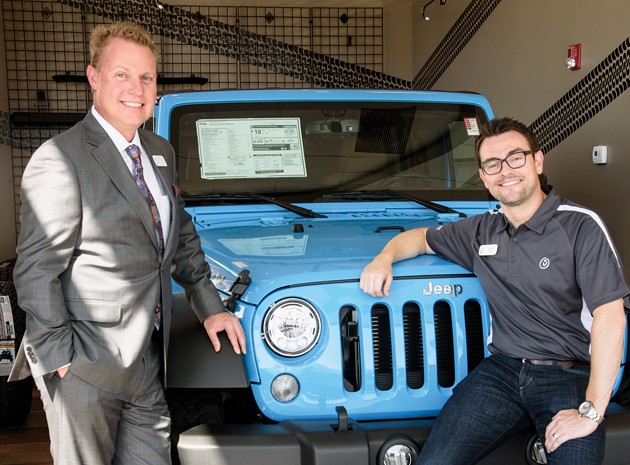 If Scott Turner has his way, Tooele County residents thinking about buying a vehicle won’t drive any farther than Performance AutoMall Tooele.

Turner is the new general manager of Performance AutoMall Tooele. He took the reigns on the only new auto dealer in Tooele County on Aug. 28.

“I want people to see that we are their hometown dealership,” Turner said. “People should have the best experience buying a vehicle right here, that they have no reason to drive any further.”

Turner should know how to do that; he’s been selling cars, or as he prefers to call it, “helping people to buy cars with a smile,” for almost 14 years.

Born and raised in Phoenix, Arizona, Turner served a mission for the LDS Church in Mexico. While he was in Mexico, his mother moved to Salt Lake City. When his mission was completed, he came home to Utah.

“My mother has a chronic illness and can’t work,” Turner said. “So I needed to find work to help support my family.”

“I went in and interviewed for the job like anybody would,” Turner said. “Nobody found out I was related to the owner until I had been there for nine months.”

In 2004, Turner was promoted to management and moved to Blackridge Subaru Mitsubishi in St. George as sales manager.

After a while in St. George, Turner decided he wanted to go back to Arizona. While in Arizona, he said he worked for an automobile sales training and consulting company and traveled all over North America.

Turner also went back to Mexico for a year and a half as a facilitator, or trainer, for Honda of Mexico.

After eight years of traveling, Turner wanted to settle down, so he went to work for one of the largest retail auto dealers in the U.S. called AutoNation. Between Phoenix and Tucson, Arizona, AutoNation owned 15 dealerships. Turner was its sales trainer.

In 2014 Turner became the general sales manager for a Honda Store in Chandler, Arizona.

After a year in Chandler, Turner decided to take a break from daily work. He traveled to North and South America with his wife while working part-time for the consulting firm he worked for previously.

After nearly a two-year break, Turner reconnected with Bengtzen in 2017. Bengtzen was now a partner in Performance Automotive Utah.

Turner became the sales trainer for Performance Automotive Utah. He spent four or five days a month with the sales staff in Tooele.

“On Sunday Aug. 27, I had a conversation with Kirk, and on Monday Aug. 28, I was the general manager for Performance AutoMall Tooele,” Turner said.

Turner works with a staff of 62 people, including a sales force of 12 people.

“Our team feels very committed to making Performance AutoMall people’s first choice,” he said. “Not just for new or pre-owned vehicles, but for parts and service as well.”

Performance AutoMall Tooele has been selling an average of 100 vehicles, new and pre-owned, per month according to Turner.

But simply counting the number of sales isn’t the way to improve sales, Turner said.

“We know that the best measure of success isn’t the number of cars you sell, but how many return customers you have,” he said. “It’s the number of people that you help that have such a good experience that they won’t go anywhere else.”

“If we don’t have the vehicle people want on the lot, through our connection with Performance Auto in Bountiful, we can usually get the car here in one or two days,” Turner said.

The sales staff at Performance AutoMall in Tooele can also connect people with Toyota or Honda cars in Bountiful, he said.

For the month of September, Performance AutoMall is donating $150 to the Huntsman Cancer Institute in the name of every customer that purchases a new or used vehicle.

Turner has also put the word out that food trucks are welcome at Performance AutoMall on Saturdays.

“We would like to make shopping for a car on Saturday a family activity,” he said.

Performance Automotive’s slogan is “Put a smile on your face, every customer, every day.” But according to Turner it’s more than a slogan.

“It’s the way we do business,” he said. “Buying a car should make you smile.”