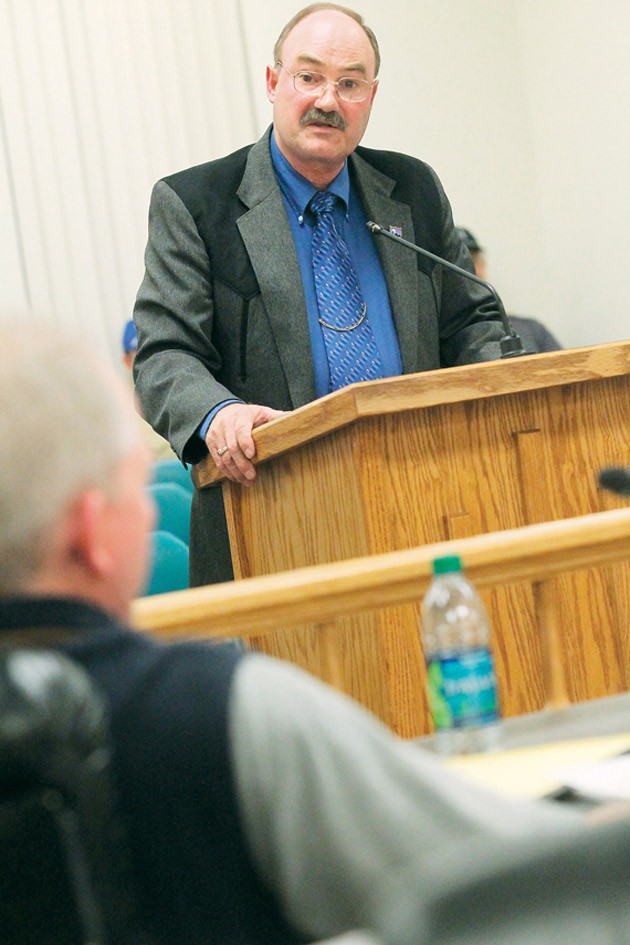 Grantsville Mayor Brent Marshall gives his State of the City address on Feb. 1, 2012, to the city council. Marshall was pushed to make sure city employees are unified and feel part of a team.

January 8, 2013
Person of the Year: Brent Marshall – Transparency and hard work at heart of Marshall’s style

Transparency and hard work at heart of Marshall’s style  ♦

When Brent Marshall was elected Grantsville’s mayor in 2009, his initial goal could be summed up in one word: unity.

“It just felt like we weren’t a team,” he said. “Everybody had their own little team but there was no core team.”

As Grantsville’s first full-time mayor, Marshall, a force of congenial folkishness and focused energy, has remade the culture of the city’s government. From day one, Marshall implemented weekly, pre-city council and post-city council meetings for department heads with the intent of making all of the moving parts work more harmoniously.

Shauna Kertamus, planning and zoning administrator, said she believes those efforts have succeeded in bringing about a more cooperative atmosphere to the city offices.

“I think we’ve become a working group of friends,” she said. “We see more eye to eye.”

Marshall, the Transcript-Bulletin’s Person of the Year, is modest about the transformation he’s wrought, saying most of what he’s done was done for practicality’s sake. The meetings, for example, allow him to be better informed about the issues his staff are tackling and help him to answer questions from citizens.

“It allowed everybody to be on the same page. If there was an issue that was brought up or a question, we had a bigger brain bank looking at the problem,” he said.

Kertamus said the meetings help to correlate the goings-on of the city council and planning and zoning commission, as well as keep the department heads up to speed.

“There was a huge gap prior to this,” she said, noting that the two bodies dealt with many of the same issues but had not often communicated, causing problems for citizens. “Now it’s been more cohesive between planning and zoning and the council.”

Marshall said those meetings also serve as a means of motivating staff, because they allow everyone to see the big picture and why their efforts matter to the whole.

“In our staff meetings, we have discussions as to what we’re trying to accomplish, so they don’t have just a little piece of the pie. They understand what the whole picture is, so they have an understanding that they may only have a little piece of this project, but that piece of the project is crucial to the completion of the project,” he said. “That’s a motivating factor, that they know that it needs to happen, that we’re a team, that everybody has a position to play or a part to do, and that’s kind of the way we’ve gone about doing that.”

When an issue involves bad news, such as in the case of a Police Officer Standards and Training disciplinary council hearing of former police chief Dan Johnson last March, and the fallout after his police credentials were suspended for 18 months, Marshall said he tries to be frank and honest with staff so they are aware of the problem and can brainstorm ways to potentially solve or mitigate it.

Before taking office, Marshall, a Grantsville native, had served a term on the city council and worked as a maintenance foreman at US Magnesium. From his experience as a foreman, he said, he learned that teams work best when the strengths of their individual members are utilized. From his time on the city council, he said, he learned the importance of communication with the community, and gained experience working with the sometimes convoluted ins and outs of a municipal budget.

“We need to be accountable for the money we spend,” he said. “We all have to live within our means.”

In the weeks and months preceding the new budget year, Marshall meets with each department head and reviews the current budget and discusses what that department’s needs will be during the next year, he said.

“I think that it makes them accountable [for what is spent], as well as myself. I think it shows them there is someone watching the bank,” Marshall said. “We make sure purchases are needs, not wants or desires.”

Sue Gustin, treasurer and personnel director, said those reviews have helped each department be a bit more thoughtful about their budgets and have improved the financial health of the city overall.

“He makes the department heads accountable for everything they buy,” she said. “We have gone from being in a really poor state, financially, to having sufficient for our needs.”

Part of Marshall’s push to keep the city in the black while not burdening taxpayers has included trying to increase economic development in Grantsville. Nicole Cline, former economic development director for Tooele County, said Marshall’s efforts in bringing in businesses are more pointed and direct than previous Grantsville mayors, and cites 2011’s annexation as an example of how the city has tried to make Grantsville a more enticing place for companies to consider.

“The mayors that I’ve known before have been involved, but I’d say Brent Marshall is certainly more involved and a little more aggressive toward getting businesses up and going and stabilized within Grantsville City, and he’s been able to expand city boundaries in a way where they now have an industrial corridor, which they didn’t have before,” Cline said.

Marshall has also presided over a much-improved relationship with Grantsville’s larger neighbor to the east. Marshall said since the settlement of the Grantsville-Tooele lawsuit, the monetary portion of which is funding the construction of Grantsville’s new library, the rebuilt relationship between the two cities has been beneficial in discussing projects that affect both towns.

“There’s a cohesive environment between [Tooele and Grantsville],” he said. “I think the mindset for that has changed.”

Most of the city’s department heads have been at the helm for several years and are deeply entrenched in their respective fields. In the last year or so, though, two new faces have showed up — Joel Linares, hired last January to replace retiring city attorney Ron Elton, and Kevin Turner, brought in from Utah County in June to fill the role vacated by Johnson last spring. Marshall said with both of those hires, beyond typical qualifications, the city was hoping to find replacements who would stick around.

For the position of city attorney, Marshall said, it was difficult to find a candidate with both criminal and municipal law experience, as well as someone likely to stay with the city for many years. Linares, a Grantsville native, had criminal experience and a little municipal experience, but was hired as a part-time city attorney before Elton retired and quickly began to learn the ropes. Marshall said in the year since he was hired, Linares has begun to grow into the job — which was something hoped of whoever filled the position.

“We wanted the candidate to grow with the job,” he said. “We wanted someone with longevity.”

Turner’s hiring was somewhat different. Because the job of police chief is more visible than most other department heads, a board with representatives from different age groups and demographics was formed to review candidates. When Turner emerged as a front-runner, he and his wife were interviewed individually about their thoughts on moving from the burgeoning subdivisions of Utah County to Grantsville.

“When the family’s not happy, they don’t stick around,” Marshall said. “We wanted to make sure the family would be happy with the move.”

That emphasis on family is present throughout Marshall’s management style. His children and grandchildren live in Grantsville, as well as a brother, a sister and his mother.

“I’d rather you give me an award for being the best father or grandfather,” Marshall said, joking.

That tricky balance of work and home is somehow maintained, despite his full-throttle work ethic of coming in early, leaving late, attending dozens of meetings and lobbying for the town’s interests during the legislative season.

Gustin said Marshall is nearly always in before and after the rest of the staff, and does not take time off to compensate for the extra hours. In addition, she said, his availability and willingness to sit down with citizens with questions or concerns, as well as a newsletter he writes to be sent with utility bills, have made the community feel more included in the government process.

“He’s made it more than a full-time job. He just doesn’t take much time off at all,” she said. “He’s just an open-door-type mayor, and it’s really made a difference in the community.”

To Marshall, the communication between departments, the focus on the budget, the dialogue with the community — everything comes down to being accountable to the people who entrusted him with the job.

“There are always eyes watching what you’re doing,” he said. “We’re all accountable to someone.”