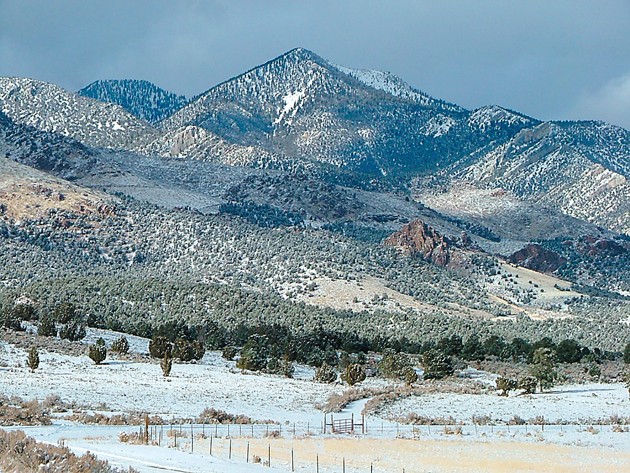 Schell Creek Range, near the location of the ghost town of Schellbourne, Nevada, which is where the Schell Creek Pony Express Station was located back in the day. Pete Neas was station master there in 1860-1961.

Winter weather creates an opportunity to sit back and consider some of the events that occurred across Tooele County’s Old West landscape.

The many stories make outdoor adventure more interesting and inspires appreciation toward those who traveled the West Desert before us.

One interesting individual, who was nearly lost in the pages of history, is Pete Neas. Neas was a Pony Express Trail station master from 1860-61 at Schell Creek in Nevada, and then Willow Springs Station, which is called Callao today.

Neas was appointed station master by Maj. Howard Egan, who was the superintendent of the Pony Express from Salt Lake City to points distant in Nevada. Egan must have trusted Neas greatly, because he assigned him to some of the most troubled stations confronted with Indian conflict.

While doing research on Neas, I found one of his descendants, Dallas Torgerson, who located some journals of his great-grandmother, Ruth Ella Neas. Her journals provide the following description of Pete Neas.

He was Pennsylvania Dutch, born in Pennsylvania, and had 11 children by two wives. Neas was described as a big, strong man who stood six feet tall, weighed 170 pounds and wore his hair down to his shoulders. Neas’ main occupation was freighting, primarily in Idaho and Utah’s Wasatch Mountains. He preferred oxen while freighting, the journals indicate.

Life was tough in those days, and he once got snowed in for the entire winter in the Wasatch Mountains. Grandma Neas wrote that Pete Neas hunkered down and “never let his fire go out.” He lived off of mule that winter.

On another occasion while freighting, Neas and his companion Jim Smith, held off an Indian attack for three days at Red Rock, Idaho. Unfortunately, Smith was killed while trying to bring water to the camp.

According to Grandma Neas, Pete Neas was friends with Jim Bridger and Kit Carson, who are well-known Old West figures. Neas had a reputation with his peers and “He would fight the Devil and probably win.”

But Neas’ main claim to fame was as a station master for the Pony Express Trail. On the frontier, he was a valuable man to have where there was little law and order, and constant danger of Indian attack.

Neas did a lot of horse buying for the Pony Express Trail and was responsible to break horses for the riders. Nicholas Wilson, in his book “White Indian Boy,” states that Neas said, “If the horse didn’t kick the hostler’s head off when he led him out of the corral, he was broke.”

Neas reportedly also had a sense of humor and nerves of steel. While stationed at Schell Creek, there was a tough man named Mike who worked there and liked to bully the employees.

One day, the station was surrounded by Indians who were intent on burning it down. Neas knew if the men stayed in the station, they would be killed, so he devised a plan to grab all the guns and knives they could and burst through the station’s door and fight their way out.

This plan didn’t sit well with big Mike, who apparently wasn’t so tough after all and refused to participate. He even cowered under a bunk during the fight. Neas and the others gathered their courage, and with a howl, burst open the door in a counterattack that surprised the Indians.

Three or four were killed and several guns and 20 bows were recovered by the men. After the engagement, the men went back and chastised Mike for being a coward. Needless to say, Mike never bullied any man again.

Afterward, Neas knew the Indians would return looking for vengeance and his crew would not be lucky again. So they abandoned the station and the Indians promptly burned it down. But Neas was not finished with them.

He knew the Indians were afraid of ghosts, so after they were gone, he and another man hid in the ruins. They threw a few flour sacks tied to ropes over the rafters of the shell of the station, then hid because they knew the Indians would return to plunder whatever was left.

When the Indians arrived, the men pulled on the ropes and lifted the white flour sacks from the ruins, which appeared to be spirits rising from the ashes. This terrified the Indians and they fled in a panic.

According to Grandma Neas, Pete Neas also wanted to one-up them himself, so he took a ride over to the Indian encampment to see what excitement he could raise. Apparently, he put a serious scare into the whole camp, which scattered — except for one old woman who raised a rifle.

She put a bullet through the cheeks of Neas’ buttocks as he stood in the stirrups galloping around. Grandma Neas supposed Pete Neas rode standing in the stirrups for quite some time after that. She stated that she noticed the bullet scars when they prepared Pete Neas for burial.

After being stationed at Schell Creek, Neas was assigned as station master at Willow Springs. Tensions along the trail between Indians and white man had nearly exploded into open warfare. The Indians didn’t appreciate all the trespassing on their lands.

By this time, Neas had made a reputation for himself, as he was mentioned in both the Deseret News in Salt Lake City and the Sacramento Bee in Sacramento, California. Apparently he was becoming famous with the Indians too, as evidenced by the following statement made by Egan in a letter to the editor of the Deseret News.

It read: “GSL City 11 March 1861 — Go-shuts told Mr. Severe they intended to steal all the stock and kill all the men they could. Notorious ‘Jack’ makes his boast that he killed Peter Neas last summer, in this he is mistaken, though doubtless his intention to do so was good enough.”

Men like Neas roamed and tamed the county’s desert back in the day of the Pony Express. In next week’s article, we will finish the tales of Neas and his exploits that occurred at Willow Springs Station.