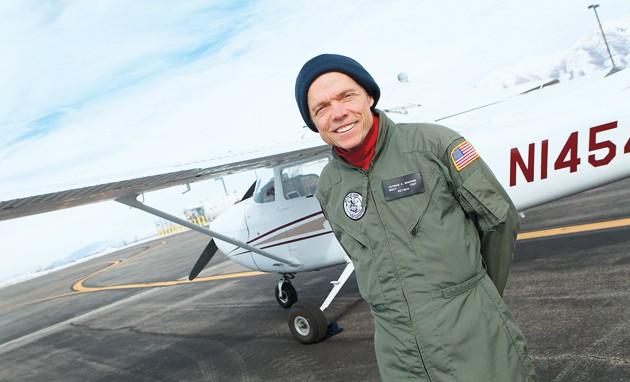 Patrick Wiggins stands near his plane at the Tooele Valley Airport Monday in Erda. Wiggins became part of Women of Aviation Worldwide Week to introduce women to aviation opportunities.

Since the early 1900s, Amelia Earhart has been known as the first female pilot to fly solo across the Atlantic Ocean and break barriers in aviation and for women.

Although her story has inspired many people around the world, the percentage of women involved in aviation has remained low — around 5 or 6 percent. However, next week, women in Tooele County will have the opportunity to learn more about aviation and how to become a pilot.

Stansbury Park resident Patrick Wiggins, who is a solar system ambassador with NASA’s Jet Propulsion Lab, has had a commercial pilot license since 1969, and is a former certified flight instructor.

He has joined the Women of Aviation Worldwide Week, which occurs this year from March 4 to 10, as a way to reach out and introduce girls and women to opportunities in aviation.

“Women are grossly underrepresented in aviation and in science too,” said Wiggins. “Being a woman pilot is non-traditional, but who cares about tradition anymore in that sense? Women are perfectly capable of flying airplanes, so give them a chance.”

Throughout next week, Wiggins will offer free, 30-minute flights in his four-seater Cessna 172 Skyhawk to women in the community who haven’t experienced a flight in a small airplane before.

“I don’t restrict it to just a week though,” he said. “I do these flights year round. If somebody wants to go flying in October, contact me and we’ll go. If someone can’t go next week, I still hope they’ll contact me.”

In 2011, Mireille Goyer, founder of the Institute for Women of Aviation Worldwide, realized that the main barrier to women’s participation in the air and space industry is the perception that the field is reserved for men. IWAW is a non-profit, British Columbia, Canada-based organization that works to foster diversity in the air and space industry.

To solve this problem, Goyer started Women of Aviation Worldwide Week. It occurs during the week of March 8, which is International Women’s Day — a day that celebrates the contribution of women to society. March 8 is also the anniversary of the first female pilot license earned by Raymonde de Laroche, an experienced French balloonist, in 1910.

The outreach initiative aims to foster diversity in aviation by celebrating women’s history, raising awareness of aviation opportunities among girls and women, and sparking vocations by introducing girls and women to aviation through industry-wide collaboration.

Wiggins is specifically looking for women who have interest in flying, but will allow men to participate as well.

“I’ll take anybody up flying,” he said. “I encourage everyone to get into aviation and the sciences, but the reason I lean toward women is because they are so underrepresented in so many ways. It’s a shame.”

Those who are interested in flying with Wiggins must be 18 or have a parent accompany them if they are under 18. Because the airplane is small, the weight limit for all passengers — not including Wiggins — is 300 pounds. Wiggins will only take people up if the weather is good, and the flights will typically occur in the afternoons or evenings.

He will also give passengers a short ground briefing.

“We’ll go through how all the parts of the plane work and what to do and what not to do,” he said. “They’ll get a little bit of a ground school.”

Wiggins said he will allow passengers the chance to take off the plane, steer the plane and possibly even land the plane.

“I will let people do as much flying as they’re willing to do and are capable of handling,” he said. “Flying under good conditions with a good airplane is not that hard.”

However, if passengers want to simply go for the ride, Wiggins said that’s OK too.

For more information or to make a flight appointment, contact Wiggins at paw@wirelessbeehive.com or visit www.womenofaviationweek.org.

“Here on the ground it’s nice, but it can be boring,” Wiggins said. “To be up in the air is literally a different world. I want people to experience that.”