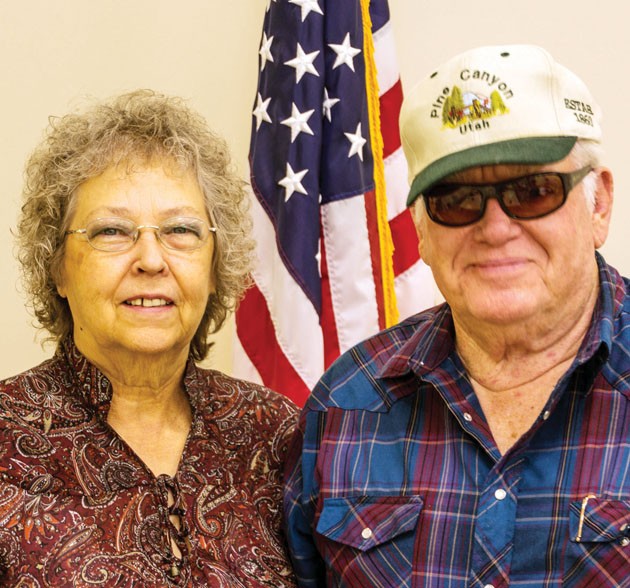 Glenda and Arlen Shields taught the Sons of Utah Pioneers many little-known facts about Pine Canyon.

On Thursday, Sept. 1, Arlen and Glenda Shields, lifelong residents of Pine Canyon, Utah, informed the assembled crowd of the Settlement Canyon Chapter of the Sons of Utah Pioneers some fascinating and little-known tidbits about our neighbors just to the east.

This author lived for seven years as neighbor to the Shields and many others who are relatives of early Tooele County settlers. He came away with knowledge he had never heard before.

Part of Brigham Young’s plan was to establish communities and industries throughout the Utah Territory. One such experimental industry was the production of silk from silkworms that fed on mulberry trees. Fifteen hundred such trees were planted on the plateau that just northeast of the middle of present-day Pine Canyon. The experiment didn’t work out as planned and no trees remain today. That same area has also been used for many different purposes. When this author lived there, it was used as the Utah Boys Ranch.  Horses and hay were employed to help young men learn the virtues of hard work and self-discipline. Water for the ranch was available from a long pipeline that started from springs in Murray Canyon. Often, this gravity-fed pipeline would break, and the only way to fix it was to carry PVC pipe, shovels and hose clamps until the leak was located.

Pine Canyon was first settled in 1850 and so named for the creek that issued from a large canyon with the same name. Today, there are no pine trees left in Pine Canyon, having been cut down and used for building purposes and also to produce charcoal for home use, but mainly used to fire furnaces extracting the various ores found in abundance in the Oquirrh Range. Remains of these charcoal kilns in Pine Canyon and other areas of the county still exist. Many old-timers also claim that smoke produced from the many mining and smelting operations in the vicinity killed off any trees that man had not cut down.

Pine Canyon was officially established in 1860. When the LDS church organized a ward in the area, it received the name Lakeview. Until this time, church, school and any public affairs were held in a 24-by-16-foot wooden building. Later, when a U.S. post office was built, Pine Canyon, or Lakeview, received the official name of Lincoln, although even today, many fondly call it “The Gulch.”

At one time there was even a mud wall (much like the one surrounding most of Tooele City) constructed for protection from Native Americans and others.  Like in Tooele and other places in Utah, these “fort walls” were torn down as it became easier to feed the Indians than fight them.  Lots and lots of intriguing stories of relations between the intruding white settlers and the American Indians are written in publications that are fascinating to read and ponder.

For a time, Orson Pratt had three wives living in Pine Canyon, although the first inhabitants mentioned were Shields, Sagers and even Smiths who built log cabins with wooden pegs for nails. Floors were usually dirt, but many pioneer women would take the time to sweep the dirt smooth and use sticks to make patterns that resembled carpets in homes they had lived in back east, before pioneering in Utah. Arlen Shields even remembers taking fireplace-heated bricks and stones to bed during the winter.  Sometimes these heated bricks would last several hours until they needed to be reheated, or just thrown out of bed.

The Sons of Utah Pioneers thank Arlen and Glenda Shields for this difficult and romantic look into our past. Our next history will be presented by Ron Anderson. He has strenuously studied the life of President Abraham Lincoln who was active in politics at the same time the LDS people were being martyred and driven from their homes in Illinois and ended up in places like Pine Canyon, Tooele, Stockton, Lakepoint, Erda, Grantsville, Rush Valley, Vernon and even Skull Valley. It is sure to be a very entertaining and intriguing evening. Come join us Thursday evening, Oct. 6, at the TATC building in Tooele’s Education Corridor.  A potluck dinner followed by Ron Anderson’s presentation starts promptly at 6:30 p.m. And of course, everything is free!