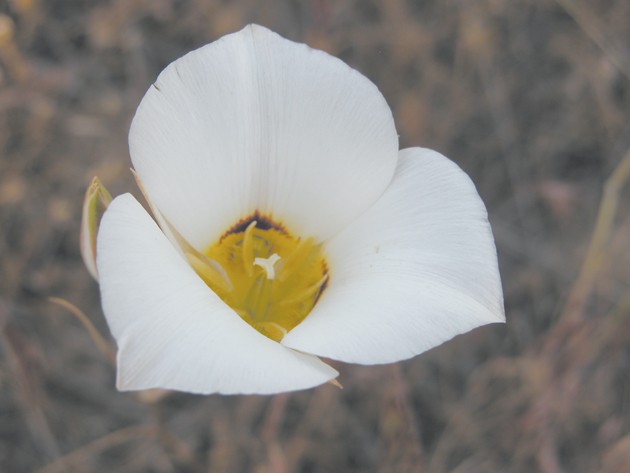 Our state flower, the sego lily, provided food for hungry settlers in Utah through the cricket plagues of early years. It was selected as our state flower because of the memory of this use, and its natural beauty.

Pioneer Day, July 24, is a big holiday in Utah. As we celebrate tomorrow we may appropriately remember the heritage that prompted this holiday.

The Mormon Pioneers who arrived in the Salt Lake Valley July 24, 1847 were a hungry lo,t and they knew that more hungry pioneers would follow shortly. They had arrived late in the season, and they knew they had no time to waste. It was a matter of survival.

Wilford Woodruff, who arrived with Brigham Young, described the experience in his journal.

“(The valley) was barren, desolate, abounding with grasshoppers, crickets and coyote wolves, and these things seemed to be the only natural productions of the soil. We went to work by faith, not much by sight, to cultivate the earth. We broke almost all the plows we had the first day. We had to let streams of water out to moisten the earth, and by experience we had to learn to raise anything. The stranger comes into Salt Lake City and sees our orchards and the trees in our streets, and he thinks, what a fruitful and delightful place it is. He does not think that, for twenty or twenty-four years, almost every tree he beholds, according to its age, has had to be watered twice a week through the whole summer season, or they would all have been dead long since… In the pioneer journey, coming here [to the Salt Lake Valley], we had to come by faith; we knew nothing about this country.”

They set to work the day they arrived in turning water out to soften sun-hardened desert soil and to plant crops. Gardening was all about food — in fact almost everything was about food (and shelter) for survival.

A small party came into the valley on July 22 — two days before the arrival of Brigham Young who had fallen gravely ill with mountain fever and had to remain a couple of days in the mountains. This small contingent could tell the ground was fertile, but it was very hard. They gathered near a stream the morning after they arrived with shovels to dig ditches to divert water onto the nearby land to soften it. They broke several plows in the hard soil before they flooded it. They planted plant beans, corn, potatoes and buckwheat — crops they thought might still mature before winter. By the time Brigham Young arrived on July 24, the group had already planted several acres.

The pioneers were not only industrious, but they were also quick learners. They made mistakes, and generally learned from them.

The first winter was hard. More than 1,100 settlers had arrived in the Utah Territory before mid-September of 1849 and food was scarce. As their meager crops and food supplies diminished, they took note of the activities of the local Native Americans.

Western Native Americans deemed the bulb-like roots of sego lily a great delicacy. They used the bulbs for food and they considered the plant sacred in Native American legends. Sego is a Shoshonean word thought to mean “edible bulb.” They roasted them, boiled them or made them into a porridge dish.

The settlers took note and dug and ate sego lily bulbs from the dry hillsides. Some years, sego lilies appear as if by magic and cover hillsides. Then they may go practically unnoticed for several years. Fortunately, sego lilies grew and produced in great abundance in 1848.

The pioneers dug them and ate them raw, roasted, and cooked and probably any other way they could think of. Their journals say that they had a nutty taste. Unfortunately, a similar flower also grows on our hillsides and the bulb of it is poisonous. There were a few instances of poisoning during that first lean year but mostly, the bulbs carried them through.

Some bulbs were as large as walnuts, but most were the size of marbles. The bulbs were best fresh-cooked because they turned thick and ropey when cool.

No one said they loved them, but they were very grateful for them and loved the life that they provided. These fleeting flowers are not a part of our modern-day diet, but they are certainly a part of our heritage.

By the 1880s, the early settlers who had eaten the bulb were set apart somewhat from the late-comers to the valley. It became symbolic of having suffered through the hard times and showed tenacity. For those pioneers it became a badge of virtue to have been a “bulbeater.”

One of the best known stories of Pioneer Day is the miracle of the crickets and seagulls.

The story is familiar to anyone who has lived in Utah for very long. The settlers who made the pioneering journey had left thousands of people behind in Winter Quarters, Neb., near Omaha. These people were working together to produce crops for even more converts who were arriving from throughout the United States and across the ocean. All would in good time make the trip to Utah.

As spring arrived in 1848, the Utah group knew that they must work hard if they were to produce enough food for themselves and those who would be arriving soon. They had the drive to make their fields and gardens grow and hopefully to produce bounteous crops.

Journals from those days tell the story of the Miracle of the Gulls. When hoards of crickets descended in May devouring everything in their paths, every able-bodied man, woman and child rushed to try to thwart them. They crushed, drowned and burned the crickets but more came. The ravenous insect throngs ate not only the crops but the corpses of those crickets killed earlier. The people couldn’t do enough to end the plague using their own devices, so they called upon heaven for help — undoubtedly with all the sincerity that faith and desperation could bestow.

And then came the miracle. The sky was darkened by flocks of seagulls out looking for an easy meal. The settlers thought the end of their crops had come, but the seagulls preferred crickets to grain and vegetables. Not only that, the birds were and are gluttons. They ate until they were over-filled, and then flew back to the lake to disgorge themselves and return for more.

It is not hard to imagine the pioneers’ relief and gratitude as the noisy birds cleaned up the hoards of Mormon crickets in 1848.

As the years passed, Utah has faced similar onslaughts. Our food heritage changed and took many forms. Mistakes continued to be learning tools.

Sugar was a rare commodity for early Utahans. They tapped the native bigtooth maples for sap and boiled it down for maple syrup. It wasn’t a very rewarding task, especially for those who came from the sugar maple forests of New England. Although the bigtooth maple is related to sugar maples, there are important differences. In New England, there are forests of sugar maples, many with large trunks two or more feet in diameter. Bigtooth maples have smaller trunks and dot the mountainsides. When tapped, sugar maples produce prodigious amounts of sap compared to bigtooth maples. Forty gallons of sap from a sugar maple will boil down to make a gallon of maple syrup. In contrast, it takes 160 gallons of hard-won bigtooth maple sap to make a gallon of syrup. Considering the relatively scant supply of trees and sap and the amount of wood needed to boil it down, it quickly became obvious that this would not be an excellent source of sweetening. A sugar beet industry developed later to help fill the need for sweeteners.

Other ventures were more successful. There were hunting trips to bring home game. They dried and salted meats and tucked them away for winter eating. They dried vegetables and fruits as well.

Cold foods in the summer were popular then as they are now. Journals tell of stream-chilled watermelons and hand-cranked ice cream made with ice chipped from blocks brought from streams into cellars and covered with a thick layer of sawdust to insulate it.

As we sit down tomorrow to indulge in a steak or burger broiled to perfection, surrounded by salads and our foods of choice and a dish of ice cream from our freezer to top it off, we might do well to remember the people who passed down the food heritage we enjoy today.