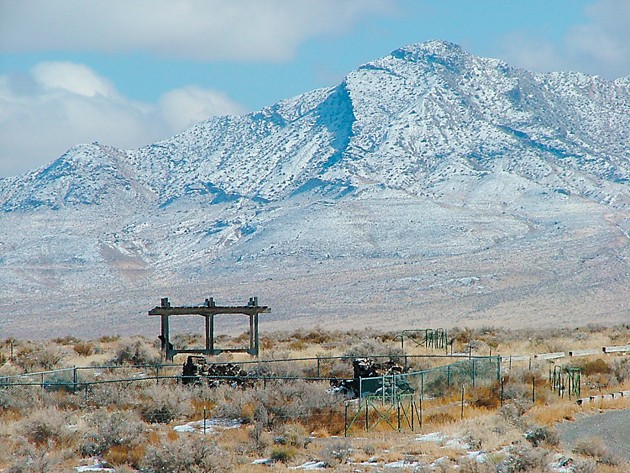 This is a 2006 photo of Boyd’s Station on the Pony Express Trail in Tooele County’s outback. The view is looking east with the Fish Springs Range in the background.

George W. Boyd, will be better remembered for his great contributions to the settlement of a wild and dangerous land.

“We must go beyond textbooks, go into the by-paths and untrodden depths of the wilderness, and travel and explore, and tell the world the glories of our journey.” —John Hope Franklin

George Washington Boyd was a pioneer who contributed greatly to the success of the Pony Express Trail and Overland Stage through western Utah. He explored routes, built roads and stations, and kept remote stations supplied with water, hay and fuel.

Sadly, this pioneer’s contributions have mostly been forgotten. However, I have collected information about him from various sources so we might remember this great man.

Boyd was born on October 30, 1826 in Pennsylvania. He converted to Mormonism and migrated to Utah. Prior to that, he enrolled in the Mormon Battalion on July 16, 1846 and marched from Council Bluffs, Iowa to San Diego, Calif. — a distance of more than 1,900 miles.

The battalion was comprised of approximately 500 volunteer Mormon soldiers and officers, and was commanded by regular U.S. Army officers. It is widely believed that this march across the desert southwest secured the area for the U.S. during the Mexican-American War.

I find it amazing that the Mormons — who had suffered harsh atrocities by the hands of U.S. citizens, and those atrocities were ignored by the U.S. government — were now on the banks of the Missouri River, answering the call of their country. They were volunteering to leave their families on the plains and risk death for the same country and government that had treated them so poorly. Patriots is what these men were.

Brigham Young’s decision to answer the call was brilliant. It was a public relations coup, and it gave the Mormons a chance to demonstrate loyalty to the U.S. It also infused the Saints with much needed cash to buy wagons, oxen and supplies prior to their migration to Salt Lake City.

Boyd’s name appears under Company “D” on the Mormon Battalion monument on the grounds of the Utah State Capitol. After his service in the battalion, he left the military in Los Angeles on July 16, 1847 and returned to Salt Lake City on Jan. 5, 1848. Many of the experiences he had in the battalion served him well while in Utah’s west desert.

It is said that battalion members learned desert irrigation techniques from the O’odham and Pima villagers in the vicinity of Tucson, Ariz. This proved useful to the Mormons in Salt Lake Valley and outlying areas as they cultivated those lands.

Boyd also learned about military operations, tactics, explorations and long marches through unknown terrain. As the battalion traveled, it constructed a wagon road to California. Again, expertise gained through that experience no doubt helped Boyd while he worked for Maj. Howard Egan on the Pony Express Trail in the west desert.

By 1855 Boyd had established a reputation as a competent frontiersman. Col. Edward Jennings Steptoe hired him, along with Orrin Porter Rockwell, George Bean and Peter W. Conover, to explore west from Rush Valley across the desert to determine if that route would be suitable for a wagon road to Carson Valley. They outfitted themselves at Government Station on Rush Lake and then headed over Johnson’s Pass, through Skull Valley and straight across the desert to the northern tip of Granite Mountain. There they found a good spring of fresh water.

They continued west across the salt desert and were caught in a terrible sand storm. The wind was so fierce it blew the packs off of their mules’ backs and splashed their party with salt water until they were encrusted from head to toe.

They found a tule swamp on the western edge of the desert near Redden Springs where they waited out the storm on the lee side of a bunch of tule reeds. The experience convinced the party that this route wasn’t good for a wagon route. On the way back the men passed Fish Springs and while staring into one of the pools, they noticed six Indian bodies standing upright and crusted over with salt, giving them the appearance of mummies.

Apparently the Indians in the area had lashed stones to the feet of their dead and used the springs as a burial site. This was no doubt a startling surprise to the explorers. Eventually the party returned to Steptoe’s Camp and informed the colonel of their findings. Based upon this information, Steptoe chose the northern route around the Great Salt Lake, with Porter Rockwell for a guide, as he and his Army departed Utah.

In 1860 Boyd returned to the desert with Maj. Egan and Enos Stookey. These three men laid out a route for the Pony Express Trail, which soon thereafter began operations. Boyd built Black Rock, Fish Springs, Boyd and Willow Springs stations. From the Willow Springs station, he supplied Boyd, Fish Springs, Black Rock and Dugway stations with wood and hay. Later when the Overland Stage took over the route, Boyd, along with E.W. Tripp, continued to supply the stage stations less favorably located with wood and hay.

While Boyd served in this capacity, Canyon Station was attacked by Indians in July 1863. The soldiers garrisoned there were massacred, and the station was burned. Boyd and some others went to there and found everything burned and the Indians gone. He buried what was left of William Riley, the station men, and the soldiers whose bodies were later removed to Fort Douglas and interred there.

In 1869 when the stage discontinued operations, Boyd bought the Willow Springs station and worked the land — 80 acres in Juab County and 80 acres in Tooele County until 1885 when he sold Willow Springs to Charley Bagley and sons and moved to Salt Lake City.

If you venture out into the loneliest corners of the desert — namely Dugway, Black Rock, Fish Springs and Boyd Stations — think about what it must have been like to keep these remote stations supplied. This especially applies to Dugway and Black Rock where there are no resources of any kind for miles and miles.

The ruins of Boyd’s station are interesting and there is a parking area and interpretive panel there. If you go far into the desert be prepared with a spare tire, tools, plenty of food and water, and good maps. Hopefully this great pioneer, George W. Boyd, will be better remembered for his great contributions to the settlement of a wild and dangerous land.