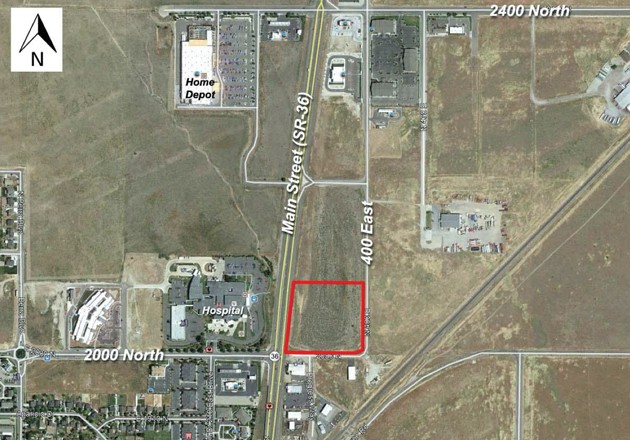 A map showing the proposed Fortess Self-Storage by KMD LLC, for approximately 5.53 acres located at approximately 2100 North and SR-36.

The Tooele City Planning Commission approved a zoning map amendment request for a self-storage business at its meeting Wednesday.

The request, submitted by Tooele local Arno Kruisman, representing KMD, LLC, is for a zoning amendment from General Commercial to Light Industrial in conjunction with a self-storage facility, entitled Fortress Self- Storage, to be located at approximately 2100 N. Main Street.

“This request is for the subject property on 5 acres located east of Main Street and north of 2000 North,” Aagard said.

Access to the site is limited to 2200 North and direct access to SR-36 is not likely due to the viaduct, he added.

Aagard noted that the property is also designated within the North Gateway overlay and that overlay places greater requirements on developments regarding landscaping, building architecture, and parking lot locations. Rezoning the property to light industrial will not have any impact on the overlay and all commercial uses will still need to meet the requirements of the overlay.

A General Commercial zoning district limits most manufacturing and industrial usages. Light Industrial allows many of the same usages but also allows more intense commercial and the applicant is asking for the rezone because storage units are not permitted in the General Commercial zone, but even though the applicant plans to use the property for commercial storage. Once Light Industrial is confirmed in the zone, all commercial activities can occur on the property, according to Aagard.

The meeting then opened to a public hearing. Local entrepreneurs Randy Hunt and Steve Griffith both came forward to voice concerns about the zoning and the existing availability of Light Industrial and other properties to be used for the self-storage business.

Griffith, a real estate broker, who said he has a vested interest in Industrial and Commercial applications in the city, shared concerns on the limited availability of General Commercial.

“It’s hard to obtain,” Griffith said. “From a professional perspective, I would hate to see more commercial go. There’s plenty of Light Industrial as is.”

Arno Kruisman, the project applicant, came forward to speak to the planning commission, stating the need for the facility due to the valley’s rapidly expanding growth, based off of the findings of a private study.

The meeting then moved to a positive recommendation from the planning commission with Commissioner Robinson and Commissioner Melanie Hammer voting not in favor.

“To give consideration to my vote, I’m looking at the map and it is split in half as Light Industrial and Commercial,” said planning commission chairman Tony Graf.

“Because of that, I believe it would be appropriate, based off the items listed in the staff report, to move forward with a positive recommendation,” Graf said.

“For the record, there will be a public hearing on this,” said Tooele City Community Development Director Jim Bolser. “Anyone interested in attending should look for upcoming city council agendas as they’re posted on the city’s website.”

The positive recommendation moves the request forward to the Tooele City Council for a public hearing and consideration.

Upcoming City Council agendas can be accessed at tooelecity.org.