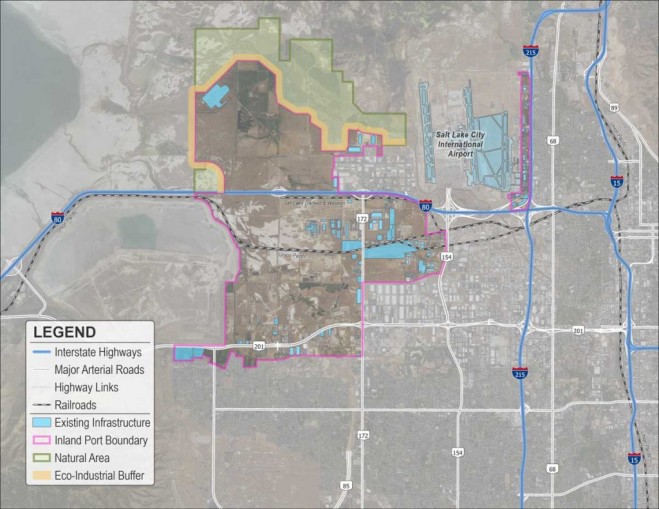 The boundary of the Utah Inland Port.

Back in February 2020, Shawn Milne, a county commissioner at the time, shared with the Tooele Transcript Bulletin a map showing approximately 12,403 acres of land in Tooele County that could potentially be a major “spoke” of the Utah Inland Port.

Two of the property owners within that boundary are saying today they are not interested in the creation of a 12,000-acre inland port in Tooele County.

The map Milne shared with the Transcript Bulletin showed possible parcels to be included in a Tooele Inland Port Project Area running from the south boundary of the Tooele Army Depot boundary across state Route 112 to near Interstate 80.

“Tooele County and other counties throughout the state have heretofore merely expressed a willingness to be considered for the hub-n-spoke model (aka “satellite port”) if it’s going to be entertained by either the IPA [Inland Port Authority] or state Legislature. Nothing more than expressions of “we’d like to be considered” have taken place by any of the counties,” wrote Milne in an email intended to calm troubled local officials and residents.

In an interview in 2020 with the Transcript Bulletin, Milne assured that no closed-door agreements had been made.

“If this comes to fruition there will be public meetings and plans to mitigate things like air pollution. … People have asked for some economic development that would create a significant number of jobs. People have asked to reverse the flow of people out of the county for work, and here we have this,” he said.

Milne also shared an email he sent to a representative of the Romney Group, owners of the Lakeview Business Park, who, from the content of the email, appeared to be involved with drawing the map.

“The County Commission reviewed this map and request during an executive session this morning. We’re mostly okay with what’s proposed. I will say that we’re not thrilled about including property that’s not genuinely developable, just to drive up the acreage number. Likewise, we want something in writing from y’all, noting that you’ve personally spoken with a representative of each parcel included in the latest map and that they’re okay with being included in the proposal. That way we can say to anyone that asks that we didn’t just flippantly include parcels we alone thought were fitting,” Milne wrote in an email to Anthon Stauffer, the Romney Group’s chief investment officer.

In an interview last week, Stauffer said that the Romney Group is not pursuing a 12,000-acre inland port in Tooele County.

Stauffer did say that the Romney Group was working on reopening an existing unused rail line to bring rail access to the Lakeview Business.

The Romney group’s desire for rail access to their property is no surprise.

About 6,000 acres of Six Mile Ranch was included in the map of potential inland port plan property.

According to the Utah Inland Port authority’s website, the Port Authority plans to develop a system of rural connections or “satellite ports” that will serve as nodes in the Utah logistics system. These locations will form a complementary system of freight consolidating and movement assets to facilitate the efficient movement of goods throughout Utah.