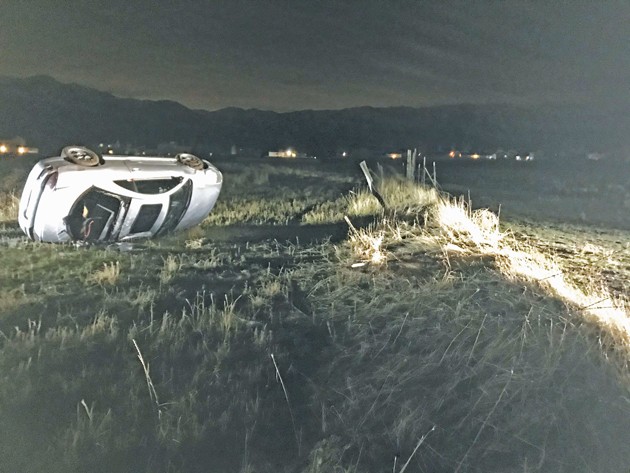 A driver fled a vehicle that turned on its side in a field near Broadway Avenue and Copper Canyon Drive in Tooele City following a police chase on March 24.

A police pursuit last week in Tooele City ended badly when a male driver wrecked a car and fled from the scene on foot.

Officers have yet to locate the suspect.

Around 11p.m. on March 24, a Tooele City police officer made a traffic stop near the intersection of First and Vine Streets for a speeding violation, according to Jeremy Hansen, public information officer for the Tooele City Police Department.

The officer successfully pulled the speeding suspect over and was able to obtain his driver’s license and speak with him.

The officer then returned to his patrol car to check the driver’s license to confirm the status of the license and to check for warrants.

The officer found that the male driver had a warrant for his arrest, according to Hansen.

The officer and a secondary officer on the traffic stop reapproached the driver and asked him to step out of the vehicle.

The driver then rolled up his window and fled from the officers in his vehicle.

The officers began pursuing the male northbound on Broadway Avenue.

As the pursuit reached 1000 N. Street and Broadway Avenue, the driver entered a field off 1000 North and officers terminated their pursuit due to the high speed of the driver, according to Hansen.

Instead of pursuing the vehicle, officers began setting up containment measures in the area where the vehicle was last observed.

After several minutes, officers located the vehicle in a field on its side in the area of Broadway Avenue and Copper Canyon Drive, according to Hansen.

When officers checked the vehicle, they realized it was not occupied and the male driver had fled the area on foot.

Officers searched, but were not able to locate the driver of the vehicle.

Police are still looking for the male and charges have been referred to the County Attorney’s Office for evading, reckless driving, and speeding.