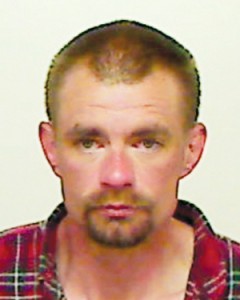 After a brief chase, Tooele City Police officers caught a man they say tried to rob a business and at least three people Wednesday afternoon.

According to a probable cause statement, Robert Shutt, 37, of Gunnison but who has been living with family in Tooele, entered Dependable Oxygen Company, 63 E. 1280 North, Tooele. There he allegedly demanded a wallet and keys from a female employee while pointing a gun at her.

The employee told police she could tell the gun was fake. She pushed past Shutt and ran to a neighboring business to report that she had been robbed, according to the statement.

Shutt allegedly took the woman’s wallet and keys and left the business going north on Pine Canyon Road. He went into Overpass Point Trailer Park, where witnesses say they saw him approach a mobile home and allegedly point a “gun” at a woman there.

Shutt approached another woman at a different mobile home and allegedly pointed a gun at her and demanded her keys, according to the statement. But when she opened the door to the home to get her keys, Shutt saw her husband sitting on the couch in the front room and fled.

About a block north from there, Shutt knocked on another mobile home and allegedly pointed his gun at a woman who opened the door. He demanded the keys to her car, according to the statement. When another woman came to see what was going on at the front door, Shutt allegedly pointed the gun at her. The first woman grabbed the gun and tried to shut the door on his hand, but Shutt pulled his hand away and fled.

Officers located Shutt going north on the railroad tracks and arrested him. Employees at Dependable Oxygen identified him as the same man who had come into the business the previous week to use the restroom. The employee who had been robbed also identified Shutt as the robber, according to the statement.

Police found the gun, which turned out to be a toy firearm, and some discarded clothing in a shed around the corner from the last victim.