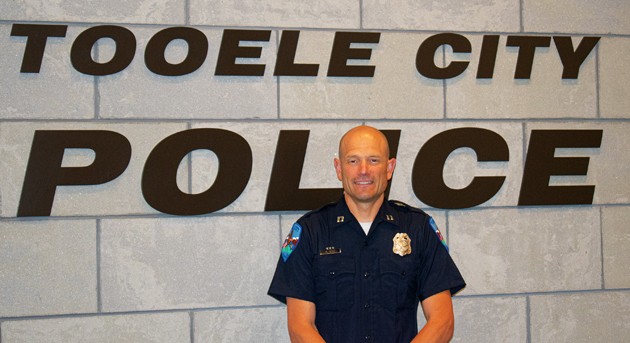 Graduating from the school is a significant achievement, according to Kirby.  Most of the leaders of law enforcement agencies in Tooele County are graduates of the school, he said.

Day said that he decided to go back to school to further his knowledge as a police officer.

“The chief offered the schooling to me and I saw that Tooele County Sheriff, Paul Wimmer took it.,” Day said.

Traditionally, the police staff and command program was a five-week full-time onsite course, but Day took advantage of a new online program that took 22 weeks to complete.

“When it was offered online, I thought it would be a great way to take it and not have to leave the city. It said that you had to plan on 25 to 30 hours a week for the courses. I wanted to make myself better and learn how to command better. A lot of highway patrol officers say it’s a lot more work online and it was. The chief was really good to let me not have to do much at work and continue with my schooling.”

During his time at the university, Day learned how to use statistics to develop schedules, budgeting, traffic operations, and how to be a better leader.

“The leadership was one of the longest courses,” Day stated. “You need management and leadership together. It taught me current trends in police departments around the country also. It was so in depth in those 22 weeks.”

Day said that his courses were “fast paced and intensive”.

He completed five leadership books during his first two weeks attending the university.

Day has been with the Tooele City Police Department for 19 years. Starting as a patrol officer, Day advanced in his career with the department as a detective, task force detective, sergeant, lieutenant, and now captain — where he serves as the assistant chief under Kirby.

Day grew up in Highland and Lehi. Working on farms while in school, he graduated from American Fork High School.

He started his law enforcement career in Tooele City as a police officer in 2001.

Day wanted to work for the American Fork Police Department, but took the job with the Tooele City Police Department because they offered competitive pay and he liked the people living in the county.

In 2004, Day became a detective in the property crimes division.

He was assigned to the drug task force in 2005, and promoted to a patrol sergeant in 2006, where he served for four years.

Day was promoted to a patrol lieutenant in 2010 and in 2015 he became investigation lieutenant.

Day has a bachelor’s degree in sociology with an emphasis in criminology from the University of Utah, along with his schooling from Northwestern University.

In his free time, Day enjoys hiking with his wife who is an avid hiker. He also enjoys spending time with his three sons, who are all named after past U.S. presidents, attending their  cross country and swim team events.

As captain of the police department, Day is currently in charge of  the department’s lieutenants and detectives.

Day also handles complaints and internal affairs investigations, the animal shelter, and assists the chief with the department’s budget.

Despite news about negative police and community relations in other communities, officers in Tooele City experience a lot of support from the community, according to Day.

“Every sergeant and lieutenant has a full plate,” he said. “We have quite a bit going on. I feel like the support in our area as a whole is awesome for law enforcement. The other day, I was getting a drink at 7-Eleven and a woman tried to buy my drink for me. I hear that officers are having their meals paid for also. People are constantly thanking us for our service. We have great citizens supporting us in what we do and it is a pleasure serving the people of this area.”

“Day has been serving as the assistant chief. He has responsibilities in all the departments. He does a wonderful job and serves the people of Tooele City very well,” Kirby said.