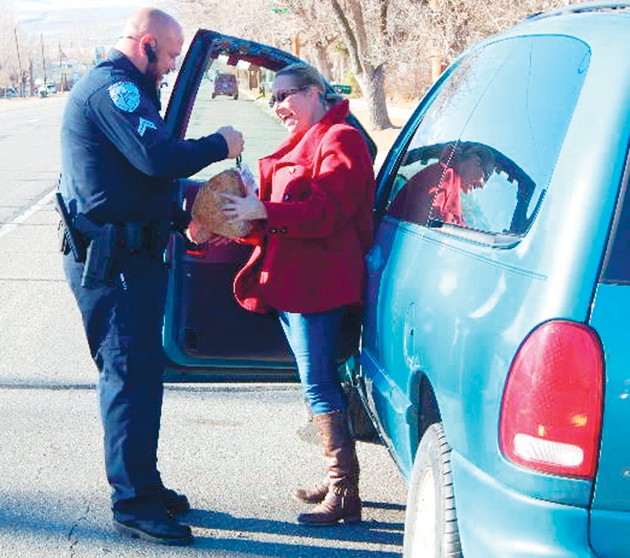 Cpl. Mike Jones of the Grantsville City Police Department gives a spiral-cut ham to a driver Tuesday. Officers of the department stopped and offered a ham to drivers they saw obeying traffic laws. The hams were purchased through an anonymous donation that directed officers to spread holiday cheer.

An anonymous donation allowed the department to purchase 20 spiral-cut hams, which they then gave to drivers they saw obeying traffic laws.

“I’ve seen this done before and it seemed like a good idea to give back to the community,” said Grantsville City Police Chief Kevin Turner. “We just kept our eyes open for people who, say, came to a complete stop, stopped at a crosswalk, used their blinker.”

The hams were purchased from Walmart, which sold the hams to the department for roughly half of the normal going rate.

Drivers who were pulled over after being observed following traffic laws were informed of the reason they were stopped and offered the ham as a sort of holiday reward, Turner said.

“It’s nice to stop people for doing good things, say, ‘Hey, thanks, you’re doing it right,’” Turner said. “Hopefully, we’ll stop someone who has a genuine need and it will help them through the holidays.”

Turner said he stopped a few drivers who said they had been worrying about how to put a nice Christmas dinner on the table due to having a difficult financial year.

Cpl. Mike Jones with the Grantsville City Police Department said he was glad to be able to help people, some of whom were very appreciative.

“That woman seemed like she was barely keeping the tears in, and she said she always appreciated the police department,” Jones said. “A lot of times when we show up, it’s because something bad happened. It’s nice to be able to help people in a really positive way like this.”