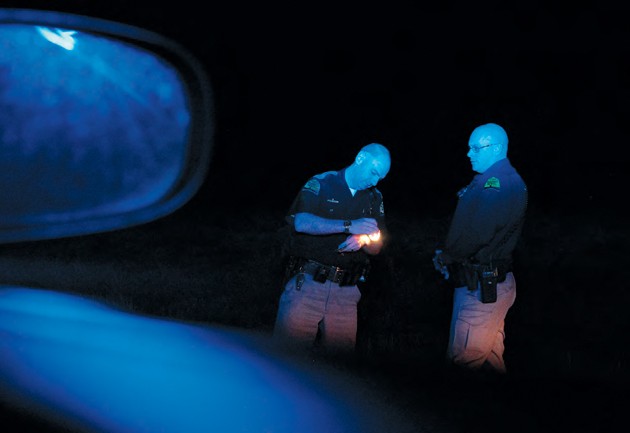 Utah Highway Patrol trooper Clint Fawson and Roger Daniels look at drivers licenses during a state-wide DUI blitz in 2011. According to UHP Sgt. Bob Gutierrez, the agency plans to put extra troopers on the road on Super Bowl Sunday to combat an expected increase in drunk driving.

Law enforcement officers around the county are urging people partying during Sunday’s Super Bowl game to act responsibly in their revelry.

Although parties and gatherings can be an enjoyable way to spend the big game, Morgan said, responsibility should be exercised.

“I think it’s just basically everyone needs to use their common sense, use their best judgment,” he said. “DUIs can ruin a person’s life, so if you’re going to consume any alcohol make sure you have a designated driver, call a taxi, be with somebody who’s going to be responsible.”

Chief Dan Johnson of the Grantsville City Police Department said the city sees few spikes in crime on game day. Despite a vicious beating in 2007, when an argument between 33-year-old Troy Jones and his brother-in-law Gary Cunningham, 31, turned physical and Cunningham was nearly killed, Johnson said few fights are reported. The city does, however, generally see an increase in the number of DUI arrests — often two or three that night, up from the typical one or none.

Drunk drivers are of particular concern for troopers from the Utah Highway Patrol. Sgt. Bob Gutierrez said the agency plans for the uptick in calls for drunk drivers by putting extra troopers on the roads. A total of six troopers are expected to be on the roads Super Bowl Sunday, he said — up from the usual two on the roads at any given time.

The point, he said, is not to give tickets — it is to increase highway safety. Lt. Corey Nye of the UHP said troopers will be on the lookout for drunk drivers, as well as paying attention to speeders and other violations. Gutierrez said people who do drink during Super Bowl parties, as with any other time, should make sure they can get home safely and legally.