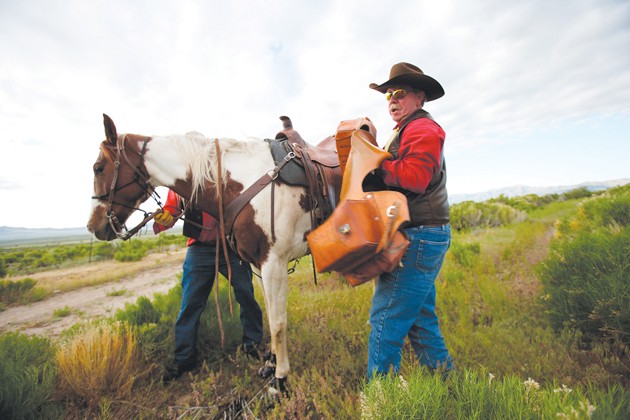 A Pony Express re-enactment rider removes a mochila from a horse on June 13, 2010. The re-ride comes through Tooele County this weekend.

One of America’s most romanticized historical events from the days of the Old West will come back to life in Tooele County’s outback Sunday.

The National Pony Express Association’s annual re-enactment ride began Monday in St. Joseph, Mo., and is scheduled to end in Sacramento, Calif., on June 27. While en route, hundreds of volunteer riders and their horses will pass through Missouri, Kansas, Nebraska, Colorado, Wyoming, Utah, Nevada and California. The total trip distance is nearly 2,000 miles.

The Utah portion includes the famous trail through Tooele County, which runs from Five Mile Pass in southeastern Rush Valley and across the Great Salt Lake Desert to Ibapah near the Utah/Nevada state line. The distance is about 138 miles.

Riders are currently scheduled to leave Fairfield, Utah, in Cedar Valley at 10 a.m. Sunday and will cross into Tooele County at Five Mile Pass on SR-73 at approximately 10:30 a.m. For the next 15-plus hours, they will make their way west to Ibapah.

According the Mark Jenkins, president of the National Pony Express Association’s Utah division, the best spots for Tooele County residents to conveniently watch the riders is at Five Mile Pass, on Faust Road, at Lookout Pass and at Simpson Springs.

For the most authentic Pony Express Trail experience, however, citizens and visitors are advised to make the trip to Simpson Springs on the west side of the Simpson Mountains. There, a restored Pony Express Station House sits beside the trail with parking and a campground nearby. Simpson Springs is located about 50 miles southwest of Tooele City.

Because the trail west of Lookout Pass to Simpson Springs is maintained gravel, SUV and high-profile vehicles are recommended.

Although it existed only from 1860 to 1861, the Pony Express Trail established faster communication between America’s two coasts before being surpassed by the Transcontinental Telegraph. William H. Russell, William B. Waddell and Alexander Majors founded the trail. It typically took riders 10 days to span the 1,966-mile route.

Jenkins explained that 75 to 80 riders and their horses will cross the trail in Utah. Each will ride about two, two-mile legs. At the end of each leg, riders will exchange the famous, mail carrying leather “mochila.”

The re-enactment is an annual event. The NPEA is a non-profit, all-volunteer association with the purpose to “re-establish, identify, and re-ride the historic Pony Express Trail.” It has 850 members in the eight state divisions along the trail.

Jenkins advised readers to follow the progress of the re-ride schedule on the Pony Express home page at www.xphomestation.com to make sure the entourage will leave Fairfield on time Sunday morning.