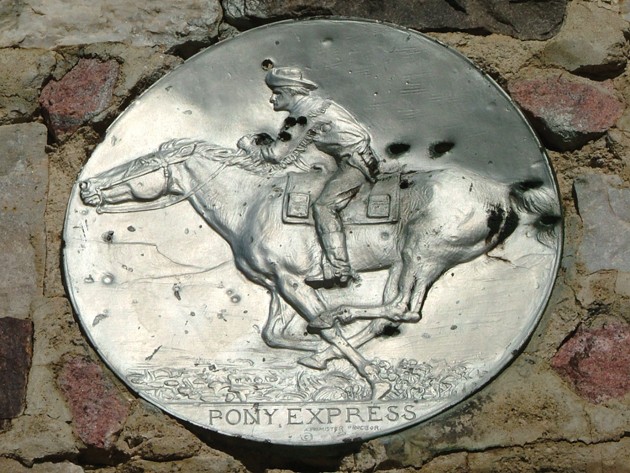 The historic Pony Express Trail can be followed in Utah for more than 100 miles, from Camp Floyd State Park in Fairfield to Ibapah in Tooele County.

November 10, 2016
Pony Express Trail, west desert are just as lonely and unpredictable as in 1860

When I think of outdoor adventure in Tooele County, nothing compares to the open emptiness of our West Desert.

Its Mars-like appearance of towering mountains, alkali flats and long, unpopulated distances make this place unlike any other in the Lower 48.

Against this backdrop, one of the most incredible tales of the American West played out from 1860-61: the saga of the Pony Express Trail. Young “wiry” riders charged through the county’s west desert as fast as their horses could go to deliver the mail on time and, in many instances, save their scalp from Indians who were bent on collecting it.

It’s interesting to me to look upon the west desert and visit the remaining Pony Express Trail stations more than 150 years after the mail delivery service between St. Joseph, Missouri, and Sacramento, California, ran its course. I often think about the famous tales and heroic deeds that were documented and have survived since then. I also think about the undocumented intrigues, episodes and difficulties that took place along the trail we will never know about.

The Pony Express National Historic Trail can be followed in Utah for more than 100 miles, from a suggested start at Camp Floyd State Park in Fairfield to Ibapah in southwestern Tooele County. Between those two points are wide valleys, mountain passes, open desert, and ancient river and lake beds from Lake Bonneville days.

The desert through which the Pony Express Trail passes is as wild, lonely and unpredictable — from a weather and distance standpoint — as it was in 1860. The sunrises and sunsets bend molten colors of light over the mountains and across the desert that will fire your imagination long after you’ve been there.

To better understand a point in history and what people then may have thought about, I like to research documents written by people who lived at that time. The documents can consist of published works from that era, such as books, professional military reports, pioneer journals, maps, newspapers, company records and more. Each can provide insight straight from the experts of the day who lived through the events and recorded their experiences.

While covering the geography and history of different sections of the trail, I will list and describe a helpful document, which if studied prior to a visit to the area, will provide the adventurer with context that will enhance their experience.

The first such reference is called the “Prairie Traveler — A companion for emigrants, traders, travelers, hunters, and soldiers traversing the great plains and prairies” by U.S. Army Capt. Randolph Barnes Marcy. I have found no better reference that explains what a desert crossing was like in the 1800s.

Marcy came to Utah in 1857 with Johnston’s Army and led a famous mid-winter crossing of the Rocky Mountains during which he and his men nearly perished. Thanks to Marcy’s heroics, they survived.  During the Civil War, he served as Gen. George B. McClellan’s chief of staff and then later as Inspector General of the U.S. Army.

His book became an essential guide that every hunter and emigrant had to have before crossing the plains, mountains and deserts. A culmination of Marcy’s 25 years on the frontier, the book provides detailed insight into how things were back at that time. According to Marcy, life in the wilderness was an art, just like living in a city.

Marcy dispensed practical knowledge in his book. “Every man who goes into the Indian Country should be armed with a rifle and revolver, and he should never, either in camp or out of it, lose sight of them,” he wrote.

He stated life and death sometimes depended on proper selection of a campsite and that a person should keep their pistol in their belt because they know not at what moment they may have to use it. What a different place the desert was back then. Indians guarded mountain passes and could wait in ambush in a ravine or around the next bend in the trail.

But even more dangerous was the prospect of running out of water. Marcy stated that no expedition should ever go into the desert without means to carry water. He gave practical advice for circling the wagons at the end of the day, setting out picket guards and using mules and dogs as sentinels. Marcy also went into great detail on wagon teams, care of oxen, wagon repair, horses and mules, sores and diseases that were common afflictions on the trail, and how to deal with rattlesnake bites. He discussed how to make a fire, find fuel for it in difficult areas, set up caches, bivouacs, signaling with smoke, trailing animals and winter traveling.

In the appendices of his book, Marcy laid out distances between stations along different emigrant trails. His book is engaging and reads easy. I have no doubt that many a Pony Express rider studied it before jumping on a horse and galloping across the desert.

As you prepare to follow the Pony Express Trail today, realize that numerous emigrants who used this same route may have had a copy of Marcy’s guidebook and used it daily for reference. It was touted as “the best selling handbook for America’s pioneers” back in 1860. It is now in the public domain and you can download a PDF copy of it for free on Google.

Much of Marcy’s advice is still applicable today. Instead of checking the steel rim on your wagon wheel, check the air in your vehicle’s tires and ensure you have a full tank of gas. Also, take plenty of food and water with you and a good map because cell phones don’t work in the West Desert.

In next week’s article, we’ll discuss the mission of the Pony Express Trail and take a closer look at Camp Floyd.