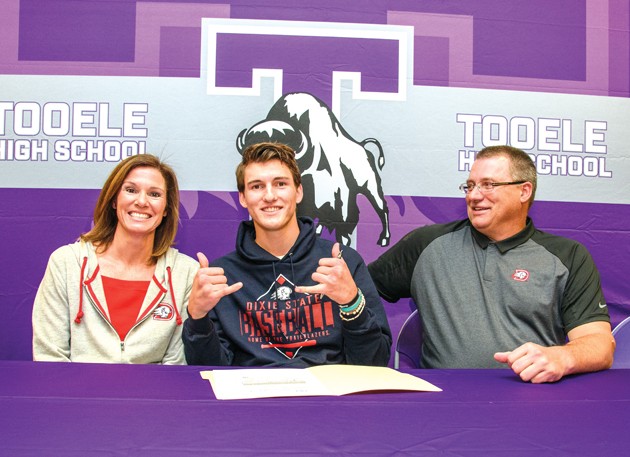 Tooele senior Brett Porthan (center) celebrates with his parents, Kathy and Eric Porthan, after signing a national Letter-of-Intent to play baseball at Dixie State University during a ceremony Wednesday at Tooele High School

When the Porthan family first moved to Tooele County from California, Tooele baseball coach Nolan Stouder got a message from their son, Brett, about how he was looking forward to suiting up for the Buffaloes.

That message turned out to be the beginning of something special for the Buffs, who have gone from the bottom to near the top of their region in a fairly short time. Brett Porthan has been a major part of that success with his hitting and pitching prowess, and on Wednesday night at Tooele High School, he saw the payoff. Porthan signed a national Letter-of-Intent to join the team at Dixie State University in St. George, just as the Trailblazers are preparing to make the jump to NCAA Division I competition.

“I’m really excited,” Porthan said. “I’ve been practicing and training for a really long time. It was always a goal to play Division I baseball at a point in my life. It’s a great opportunity. Once I found out they were going Division I, that’s where I wanted to be. I wanted to be at Dixie State and compete to pitch for the Trailblazers.”

Stouder said Porthan’s skill was evident from the first time he saw him practice, but that’s far from the only thing the THS senior brings to the table.

“The dude is an incredible ballplayer, but an even better person,” Stouder said. “He’s one of the good ones. He knows he’s talented, but he doesn’t let it overtake him. He continues to work. He doesn’t stop. He knows what his goals are and he’s trying his best to reach them.

“(Dixie State) is a competitive program, and they’re getting a good one. I feel like a lot of other schools missed out, and (Dixie State) got a diamond. I think they realize that. I’m glad that Dixie State wanted him a bunch, and he went to a place that really wanted him.”

At the plate, Porthan’s average surged to .369 with six doubles, a home run and 17 runs batted in. He had an on-base percentage of .454 and a .476 slugging percentage.

“I love coaching him — it’s a pleasure,” Stouder said. “A lot of the success we’ve had in the last couple years has to do with him. On the mound, at the plate, in the dugout, in school — he’s an awesome kid. I’m excited for him. I’m happy to see another one of our kids get an opportunity to play, and I feel like it’s helping out our school and our program. It’s putting us on the map and helping us get back to what it used to be.”

Porthan has relished the opportunity to play at Tooele and for Stouder.

“We started off at a low point when I first got here, and now we’re one of the best teams in our region,” Porthan said. “I feel that Stouder has really been a big part of that. I look up to Stouder. He always knows what to say, because he’s been at the Division I level. When I’m pitching in a big game, he knows what to do and he knows what to say.”

Porthan is looking to study business communications at Dixie State.

“I’ve just got to thank my parents. My mom and dad — they’ve really stuck with me for my entire road through my career. My brother has helped me out, thrown with me and played catch with me.”