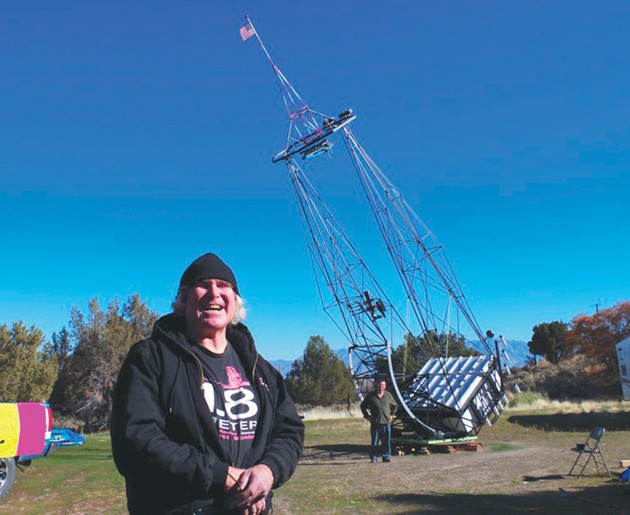 February 25, 2016
Potential new SPOC telescope a labor of love for its creator

Since he was a child, Mike Clements was fascinated by space and building things, two passions that followed him into adulthood.

Those interests eventually led the Herriman resident to construct a series of amateur telescopes, including the crowning jewel of his collection — a massive installation with a 70-inch mirror.

Now Clements is looking to house the telescope at the Stansbury Park Observatory Complex, where it would be open to the public.

The current telescope housed at the Stansbury Park observatory has a 32-inch mirror. Clements had previously constructed a telescope with a 41-inch mirror, but had to jump at the opportunity when a unique piece of equipment became available.

A mirror, intended to end up in a spy satellite designed to take images of the Soviet Union during the Cold War from space, was available for sale. The mirror was never used because of a superficial chip on the outside edge that made it unsuitable for the satellite.

Despite it being unknown whether or not the mirror would even work in a terrestrial telescope, Clements took a risk and purchased the expensive piece of equipment. Clements admits buying the mirror was a huge risk; he said if it didn’t work in the telescope he would have just purchased a 900-pound glass coffee table.

“I went for it and I did something else foolhardy,” Clements said. “I built the telescope structure before I even knew if the mirror would work.”

Clements said he purchased the mirror with assistance from Vaughn Parsons, a professional optics manufacturer in 2004. He teamed up with Steve Dodds to construct the gargantuan 35-foot-long body of the telescope.

The passion project wasn’t completed until 2013, with major construction happening in the previous 18 months, Clements said. Construction continued ahead despite Clements working a full-time job as a long-haul trucker and pouring his personal income into the project.

While he declined to talk specific figures, Clements said it took him several years to raise the capital to construct the telescope, which had no guarantee of working. The spy satellite would have used a camera to capture images, so it was unknown if the mirror would work with the naked eye.

“No amateur had built something of this size,” Clements said.

After construction on the telescope was completed, Dodd looked into the eyepiece of the monstrous telescope and told Clements they had a winner.

Clements’ telescope is able to see in tremendous detail due to the incredible amount of light it can gather. Telescopes allow observers to see more by collecting more light than our eyes are capable of, which means distant objects can be magnified and seen in greater detail.

Clement said the light gathering of his telescope dwarfs that of the already-large telescope currently housed at SPOC, with its 32-inch mirror.

“It has, in essence, about five times the light collecting surface,” Clements said.

After finishing the telescope, Clements planned to mount it on a custom trailer so he could transport it to national parks and other areas with dark skies. He was still raising the funds for the trailer when members of the Salt Lake Astronomical Society approached him about finding a home for the telescope, which sits unused in storage when Clements can’t use it.

Clements said he was excited to think the telescope would be used by the public while he was away on the road and unable to use it. While SLAS plans to construct a $20,000 metal frame building around the telescope at the current observatory complex, Clements said the telescope could still be disassembled and loaded on his custom trailer once it’s completed.

Even when the trailer is complete, Clements said he only intends to take the telescope a couple times a year on the originally planned trip to dark sky areas. For more than 300 days a year, the telescope will sit in Stansbury Park and be open to the public.

“I am so proud of it and its ability, so I feel that the sharing is a big part of my pleasure,” Clements said of his telescope.

According to SLAS director Rodger Fry, the society would construct a building about 40 feet long on a concrete slab about 90 feet long. The building would be on tracks and slide away from the telescope, giving it room to point toward the heavens.

SLAS already operates SPOC, but the society is looking to create a lease agreement with the Stansbury Park Service Agency allowing them to build the concrete pad and structure alongside the existing observatory. SLAS applied for a grant through the Tooele County Tourism Tax Advisory Board for funds toward construction of the new facility.

Clements said the telescope would not be used for research or to take pictures because it is intended for enthusiasts and the general public.

“Anybody can look through it,” he said. “It’s not some research tool.”