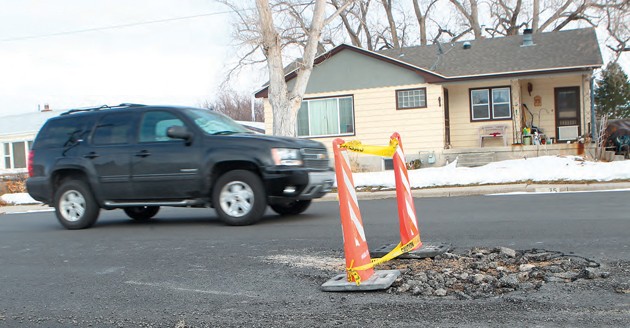 An SUV drives past one of the potholes on Hale Street in Grantsville Wednesday afternoon. The recent repaving of Hale Street that took place in October is already showing wear and tear.

February 14, 2013
Pothole repairs to Hale Street will have to wait until spring

After less than three months, a freshly repaved portion of Hale Street in Grantsville is looking a little worse for wear.

The $267,667 project to repave Hale Street from Main Street to Durfee Street was started last October and completed in November. Yet by January, some places were crumbling and turning into potholes. Recordbreaking cold temperatures have increased the problem.

Mayor Brent Marshall said options are few for correcting the situation this time of year. Winter is notoriously hard on asphalt, and some potholes have begun to appear on Main Street and Durfee Street.

However, Marshall said, continuing winter conditions make the ground too cold to pour in more asphalt, even if it were currently in production. A different kind of filler can be used in wintertime, but it’s not as effective as the warmer-weather product, he added.

“One of the problems that we have is batch plants are not up to get asphalt, and cold patch doesn’t really last very long,” said the mayor. “It’s strictly a Band- Aid at best, and it’s very expensive.”

Marshall said all persons involved in the project have been made aware of the problem, and will be ready to fix the street as soon as weather allows. Engineers are also trying to determine whether the problems on Hale Street are the result of improper compaction at the time of pouring, or if that batch of asphalt was simply faulty.

The mayor said the potholes seem to be localized between Main and Plum streets, the area that was poured first. He said the project does still have some contingency money left that will be used to fund the repairs.

Whatever the cause, Marshall said he regrets the inconvenience to residents and travelers of the road whom already had to maneuver around road equipment last fall. Information and a plan for residents of the affected area should be completed by next month, he said, and the city will try to mitigate the inconvenience. He stressed that desire has to be balanced with the time and procedures it takes to do the job correctly and efficiently.

“We’re kind of between a rock and a hard spot not being able to correct the road until the weather changes,” said Mayor Marshall. “I’m a little hesitant to do anything right now with the weather as unpredictable as it is. I don’t wish to cause any more grief to the residents than necessary. I would rather sit down and have a good plan put into place so the residents would know what the process is before they’re unable to get into their driveways.”