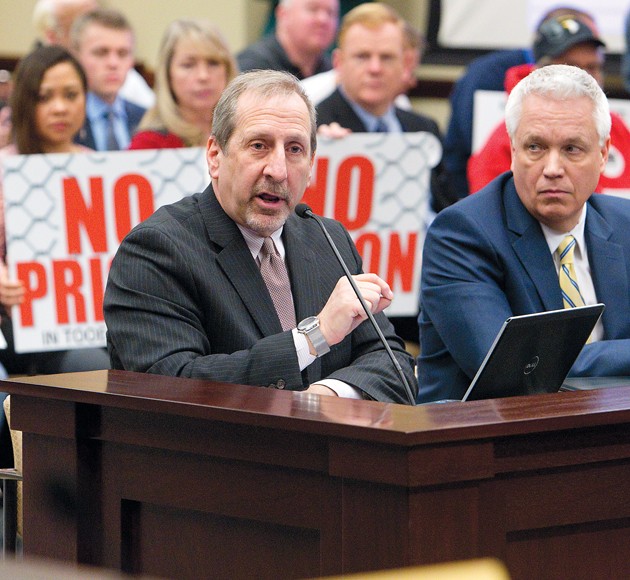 Bob Nardi addresses the members of the Prison Relocation Commission at a meeting held at the State Capitol on Feb. 27 about the selection process for the top five sites to relocate the Utah State Prison currently in Draper. Nardi is a consultant associated with MGT of America which is the firm hired by the state to help with the relocation.

Tooele County may find out next week if the state prison is headed to Grantsville.

The Prison Relocation Commission announced Tuesday afternoon that it will hold a meeting on Aug. 11 to discuss the four final prison relocation sites.

The commission may vote to recommend a site to the Legislature and the governor during the meeting, according to Sen. Jerry Stevenson, R-Layton, PRC co-chairman.

“At our last meeting in July, we received a great deal of technical detail about the final four sites and PRC members were asked to review the materials and submit questions for legislative staff and PRC consultants to answer,” Stevenson said.

“Since then, our staff and consultants have worked to answer those questions and finalize their reports,” he added. “As a result, it’s very possible we will be ready to select a recommended site on August 11.”

Once the PRC recommends a prison site, it is anticipated that Gov. Gary Herbert will call a special session of the Legislature, according to Stevenson.

The Legislature will then approve or reject the recommended site.

Legislative approval of relocating the state prison is not a given, even though 95 out of 104 legislators voted in 2014 to move the prison, according to Rep. Merrill Nelson, R-Grantsville.

“We did not have the information we have now when we made that first vote,” he said. “We are free to reconsider. Nothing is out of the picture. We are not bound to the PRC’s recommendation.”

While Nelson is confident that the prison is not headed for Tooele County, he is not happy with any of the sites under consideration.

“I do not have a good comfort level with any of the four sites currently under consideration,” he said. “The lack of community support, the high cost of pre-construction site preparation, and the expense of extending utilities and roadways to the prospective sites make the sites undesirable.”

The current prison site in Draper tops Nelson’s list of potential sites, along with reexamining sites that were discarded earlier on in the screening process before all the data was available, he said.

While only six legislators didn’t vote for relocating the prison in 2014, Nelson’s bill in the 2015 Legislature, which would have required the PRC to consider Draper as a potential prison site, garnered 16 co-sponsors before legislative leaders essentially killed the bill, he said.

The PRC has met for 15 months to whittle a list of 40 prospective sites down to the four final sites now under consideration.

Those final sites are: on the west side of Grantsville City in an industrial park near the Walmart Distribution Center; near I-80 and 7200 west of the Salt Lake International Airport; at the southernmost part of Eagle Mountain; and in Cedar Valley along SR-73 near the town of Fairfield.

In December 2014, the PRC removed a parcel of property north of the Salt Lake City International Airport from consideration after consultants reported the property had too many wetlands.

At the same meeting, the PRC removed a parcel northwest of New Bingham and Baccus highways from consideration because the property was involved in confidential plans for projects with a compelling state interest.

The owners of a parcel of property near Saratoga Springs also removed their property from consideration in December 2014.

The Larry H. Miller Group withdrew their property in Tooele County east of Sheep Lane from the Miller Motorsports Park from the prison relocation site list in May 2015.

In July the PRC extended its Aug. 1 deadline for recommending a site to Oct. 1.

The PRC may not need all that time, according to Rep. Brad Wilson, R-Kaysville, PRC co-chairman.

“This has been an unprecedented and intricate process that has become very emotional for residents of the four communities that are finalists to host the new correctional facility,” he said. “We owe it to them and to the rest of the state to arrive at a decision as quickly as possible without compromising the integrity of a very complex site-review process. I’m confident we’re finally reaching the end of that road.”

The Aug. 11 PRC meeting will be held at 2 p.m. in Room 30 of the House Building on the state capitol campus in Salt Lake City.