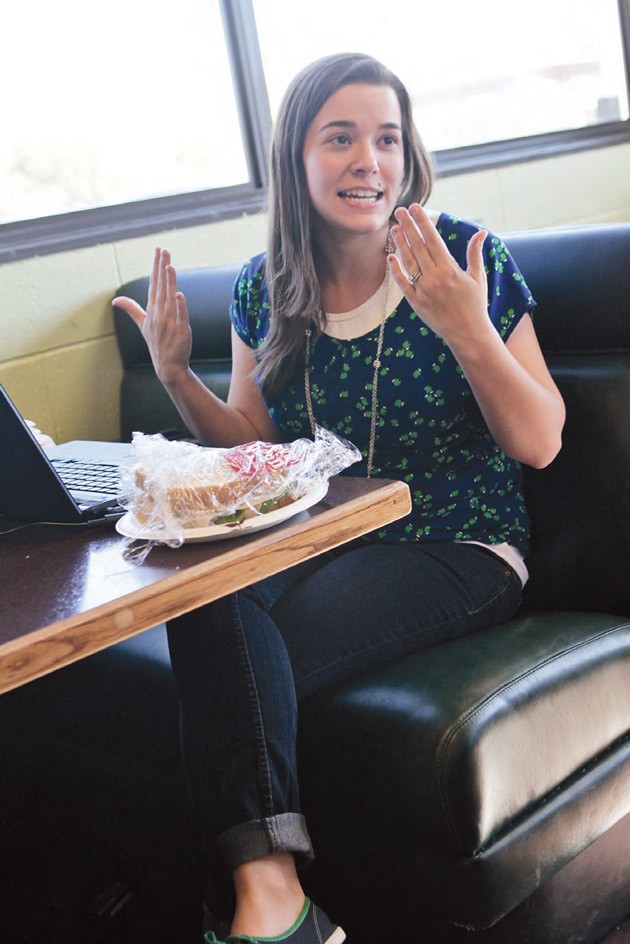 Shana Nelson talks about the election while eating her lunch on Monday.

Concerns about the future direction of the country trump state and local issues in the minds of Tooele County residents as they look at the 2012 ballot.

“Voting for a change in presidents is what was most important to me,” said Kari Lawton, 36, of Grantsville, who has already voted. “This is a pivotal time for the country and we need to change our direction. We need a president that will focus on the family, improving the economy, and getting the country back on track towards what the founding fathers wanted the country to be.”

Lawton, who was eating lunch at the Java Bean in Grantsville on Tuesday afternoon, said she was aware of the three-way race for a county commission seat and the chance to elect a new representative to the state House of Representatives, but neither race was as important to her as the presidential contest. Her lunch companion, Kathy Butler, 65, also of Grantsville, agreed.

“Things need to be straightened out, we need to have a change in presidents,” Butler agreed.

The presidential race was also the top concern on the ballot to Shana Nelson, 24, of Tooele.

“This will be the first time I will vote for president,” said Nelson. “I am older and I have children now so I want a good future for them.”

Nelson said she has been following national issues in this election and the economy, along with military issues like funding for the military and overseas military operations, top her concerns.

“With the economy, the country is the same or worse off than we were four years ago. The change we were promised never happened,” said Nelson, whose husband serves in the military. “And we need a strong military with conflicts in Iraq and Afghanistan continuing along with potential trouble in Israel and Egypt.”

Nelson admits she hasn’t been following local issues at all.

Alan Quist, 61, of Stansbury Park, was playing pool at the Dead Dog Saloon in Grantsville on Tuesday afternoon. He set his pool cue down long enough to say he had already cast a vote for a third-party presidential candidate.

“I wanted to send a message that both parties aren’t addressing important issues,” said Quist. “They spend all their time talking about the economy and I hear nothing about the environment and education.”

Robert Pitt, 34, of Erda, who works in agriculture as a truck driver and sheep sheerer, has never voted, but the presidential race has him planning on heading to the polls on Election Day this year.

“We need to get rid of Obama,” said Pitt. “He doesn’t like agriculture and the price of gas is too high.”

On a local level, Pitt said he has no idea what candidates are running.

Lisa Mattox, 46, of Grantsville, feels exactly the opposite of Pitt. She’s headed to the polls with hopes of keeping Obama.

“We’ve got to keep the Republican out,” said Mattox. “We need to keep Obama in there because the rich Republicans don’t want to pay their share of taxes.”

Mattox plans on voting a straight-party ticket for Democrats.

“The presidential race and the local races are both important,” said VanNoy. “Things are in the dumps locally and nationally, and the Republicans are the ones that can make it better.”

Denyse Cox, 49, of Grantsville, usually votes Republican but this year is voting for the Libertarian Party candidate for president.

“I do not like the direction our government is going,” said Cox. “I want to send a message to both parties that I am tired of big government and big business working together in both parties. I am fed up with the federal government encroaching into my life and doing things that the Constitution doesn’t give them the power to do.”

While the presidential race is important to Burt Ogden, 86, of Grantsville, it is local and state issues that have him really fired up.

“We need more money for schools and we need to improve our local economy,” said Ogden. “We have too much in-fighting in local politics. We need to get our priorities straightened out. We have local things that need attention like patrolling the Grantsville reservoir.”

It is not unusual for the presidential race to overshadow the local issues in a presidential election year, according to Marilyn Gillette, Tooele County clerk.

“The presidential election is all over the news and television and people get so wound up in it that they forget about the local races,” said Gillette.

Gillette’s observations of early voters, leads her to believe that the voter turnout in Tooele County this year will exceed the 66 percent that turned out for the Obama-McCain race four years ago.

Early voting started a week ago Tuesday and will continue through Nov. 1. Locations and times for early voting can be found at the Tooele County clerk’s website at www.co.tooele.ut.us/clerk/pdf/earlyvoting.pdf.