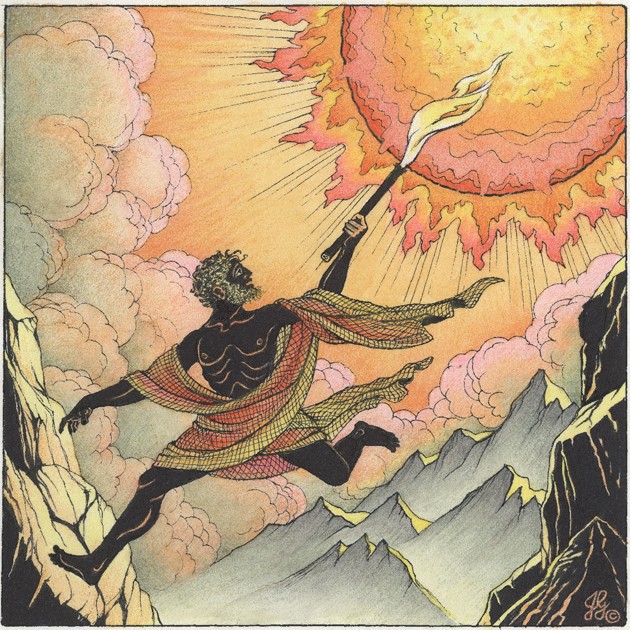 Once upon a time, long ago, the great god Zeus overcame the gigantic race, the Titans, to become the most powerful god. He ruled over Olympus and banished the Titans to Tartarus, but he spared two of those he conquered, Prometheus (or forethought) and his brother, Epimetheus (or afterthought). Instead of banishing them, he gave them the task of going to earth to make its creatures. Just before he sent them down from the heavens, he gave Epimetheus gifts to offer their creations.

The brothers traveled to earth and set to work. Using the abundant river clay, they began to mold their creations. Prometheus was wise and the more thoughtful and cautious of the two brothers. He took great care with his work, spending a good deal of time thinking over each decision he made in crafting human beings. He decided he would shape them like the gods, for he imagined great things they would one day accomplish.

His brother was not so thoughtful. He worked as fast as he could, shaping and molding all the animals. Each time he finished a creation, he handed out of one Zeus’ gifts. He gave the animals strength and endurance. He gave out a keen sense of smell and sight. To some of his creatures he gave wings; to others he gave claws; to others he gave a protective coat; and others still received thick coats of fur.

When Epimetheus was finished with his creation, he realized he had given away all Zeus’ gifts, and he had nothing left for his brother to give the human beings.

When Prometheus finished his work and saw his creatures shivering in the cold, dark night, terrified of the many powerful beasts his brother had created, his heart ached. He could not bear the sight of their suffering, and so he decided he must return to Olympus to ask Zeus for another gift. He wished to give his creations fire.

He stood before Zeus and humbly asked, “I wish you to give me one more gift. The people do not have coats of fur to keep them warm, and they do not have protective shells or wings or claws. Please, let me give them fire.”

Zeus was furious at so bold a request. “The fire belongs to the gods and to the gods alone!” he roared. “How dare you return asking for more!” And he sent Prometheus away.

Prometheus knew he must help his creations, and although he understood Zeus could be a vengeful, angry god, he decided he must do something. He would steal fire.

He waited until he was certain Zeus was not watching, and he lifted his torch to the light of the sun, catching an ember of fire. This he hid inside a hollow stalk and hurried back to earth.

He gathered the people and said, “I give you fire,” and he set the ember free.

It burst into flame, and all the people cheered at the warmth and the light of this gift.

“Never let the light of Olympus die,” Prometheus warned. “If you keep the flames alive, you shall live good and happy lives.”

As the humans watched the smoke spiraling up into the sky, their thoughts turned to the gods. They decided to build temples to honor those gods, and they decided to roast an animal as a sacrifice to those gods.

When Zeus looked down and saw the fires flickering, he was furious. He understood Prometheus had betrayed him. But when he breathed in the smells of those sacrifices, he calmed down. He liked this notion of a sacrifice to him, the all-powerful god.

Prometheus did not like watching his creations burning their meat as sacrifice. He worried that they had too little to waste on the gods, so he devised a plan.

He instructed the men to butcher an ox and to divide the meat into two equal portions. “Place chops and roasts in one half and bury these beneath sinews and bones. In the other half place scraps and entrails and fat.”

When they had followed his instructions, Prometheus invited Zeus to earth to choose his offering, and naturally Zeus selected the half that looked better — the scraps and fat. When he realized Prometheus had tricked him and cheated the gods, he was overcome with rage.

“Now you and your creations will suffer!” he roared, and he sent for Hermes, the messenger god, to carry Prometheus to the top of the Caucasus Mountains and chain him there.

Every day an eagle swooped out of the sky and tore at Prometheus’ liver, and every night his immortal liver once again grew. The next day the eagle returned, swooped down, and once again Prometheus suffered the anguish of his punishment. It was only the visits from his son, Deucalion, that gave Prometheus any joy.

Zeus had sworn to punish humans, too, and this he did — in a roundabout fashion — by creating a beautiful woman, Pandora. She was endowed with many god-given virtues, including curiosity, and Zeus sent her to Earth as a wife for Epimetheus. Epimetheus, despite warnings from his brother not to trust gifts from Zeus, accepted her, and in time, Pandora wreaked terrible havoc upon humans.

Prometheus, however, did not suffer eternally after many ages had passed. Zeus relented and allowed the great warrior, Hercules, to rescue him. Hercules killed the eagle and broke Prometheus’ chains, thus freeing this great hero and friend of mankind.