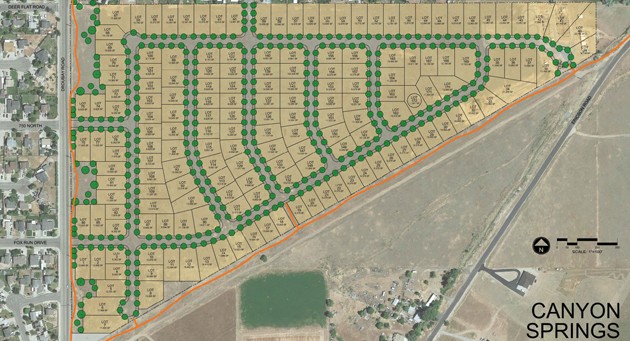 The Tooele City Council held a public hearing on Sept. 7 about a request to annex property for the proposed Canyon Springs Subdivision.

The subdivision includes 172 homes to be built off of Droubay Road south of the Carr Fork subdivision. Currently in unincorporated Tooele County, the property is known as “area K” on Tooele City’s annexation policy plan expansion area map that was approved by the City Council.

Howard Schmidt, who wants to develop the property, applied to have the area annexed into the city last year. A meeting of the Tooele City Council was held to discuss the idea in December  2021. The annexation process includes over 20 steps, governed by state law.

During the meeting in 2021, Roger Baker, city attorney, voiced his reservations in annexing the 61.16 acres of property with lots ranging in size from just over 8,500 square feet to over 21,000- square-feet. He explained that the city has limited resources related to undeveloped land.

“To bring in new additional land would only stretch those resources further, making it even more difficult to develop land already in the city,” Baker explained.

He also voiced concerns about the property needing a park or green space.

Instead of a park or green space, the developer could also pay the city $150,000 that could be used toward developing or fixing up a park the city already has.

Another recommendation during the meeting was a trail system that would run throughout the city and include a storm system.

Because of the recommendations, Baker told Schmidt that the subdivision may have to include less than 172 lots.

Other concerns include police and fire services, landscaping, water, sewer, and other utilities.

At the end of the meeting in December, 2021, Baker told the City Council and Schmidt that the above topics would have to be discussed before an official annexation could be approved or denied by the Council.

Tooele City Jim Bolser, community development director presented the potential annexation before the Council during the meeting on Sept. 7. He explained that the evening’s meeting would only include a public hearing and a decision would be made at a later date.

While addressing the Council, Bolser explained that most of the lots in the subdivision would be compliant with the city’s R1-8 zoning district, with a few of the properties falling in the R1-7 zone.

Since the last time Schmidt appeared before the Council, he has submitted studies for water, sewer, storm drains, transportation, and impacts on the city’s other resources, which the Council will look over and talk about to come to a decision in the near future.

He also decided to include a trail system around the outside of the subdivision.

“Tooele residents are already being asked to ration water and sacrifice their landscaping,” said John Williams.

During the in-person public hearing, Valerie Peterson, a resident of the Carr Fork Subdivision near the area, said she is concerned about the police department’s resources and personnel being stretched thin from the increase of residents that will come with the subdivision. She was also concerned about the increase of children the subdivision would bring to surrounding schools.

“They are probably going to have over 400 new people moved in there,” she said.

Dave Bresnahan, also a resident of the Carr Fork Subdivision voiced his concerns about water and low fire pressure.

“It looks like water is becoming a greater and greater difficulty,” he said.

At the end of the meeting, Brady spoke about the water issue, which was brought up several times during the public hearing.

“We are aware of the water situation,” Brady said, explaining that the developer has to purchase water rights for the property and the city has a plan, called the “Tooele City Water Master Plan” addressing water issues and planning for the future.

At the end of the meeting, Schmidt took to the podium to make a comment.

“We are excited to do this development,” he said. “We think it’s a plus for the city and we are at your mercy to annex this in.”

The City Council will meet again soon to vote on the annexation.