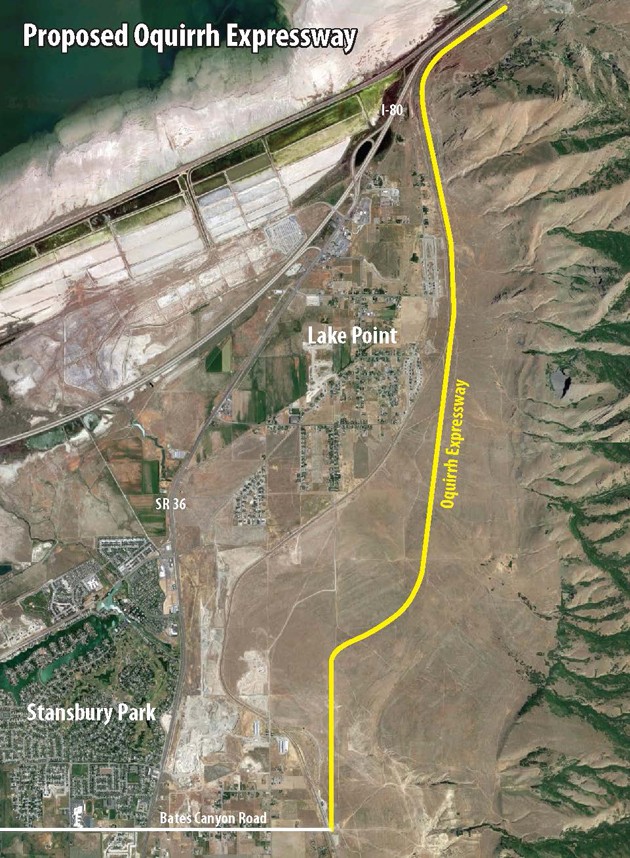 With an early 2019 construction start date planned for the Midvalley Highway, Tooele County commissioners are now advancing plans for an alternate route out of the county into Salt Lake Valley.

The map that Saddleback developer Chris Robinson presented during his presentation on a proposed amendment to his development agreement during the County Commission’s Aug. 7 meeting highlighted a strip of land 150-feet wide running north to south from Lake Point to Bates Canyon Road east of the Union Pacific railroad line.

The strip of land represents a route for what Robinson calls Oquirrh Boulevard. The county commissioners prefer the name Oquirrh Expressway.

Robinson said he has been working with the County Commission on an eventual donation, once the preferred route is determined, of the right-of-way for the proposed Oquirrh Expressway. The donation is not contingent on approval of his proposed development agreement amendment, he said.

“For sometime we, meaning our company and others in Tooele County, have been talking about how do we get more access into Tooele County,” Robinson said. “We have I-80 to exit 99, state Route 36 and we have the Midvalley Highway coming on board. In the big picture, we have envisioned a future boulevard that we call Oquirrh Boulevard, similarly named to Wasatch Boulevard in Salt Lake County.”

Nobody has calculated the acreage of Robinson’s proposed land donation, but Tooele County Commissioner Myron Bateman estimated that a three or four mile strip of land 150 feet wide would be worth around $3 million.

The County’s plans for the Oquirrh Expressway don’t end at Bates Canyon Road. The County is working with landowners south of Bates Canyon Road to bring the expressway as far south as possible, following the railroad, according to Bateman.

Oquirrh Expressway will run north to Lake Point where it will connect with UDOT’s planned extension of state Route 201 around the point of the Oquirrhs.

Getting SR-201 around the Oquirrh’s is the real pinch point in the plan, according to Bateman.

“UDOT has basically three alternatives they are looking at,” Bateman said. “Extending a two-lane wide road for SR-201 parallel to I-80, building an elevated road over the railroad track that would tie into SR-201, or tunneling a route to SR-201. All of them are expensive.”

There is no funding or construction date planned for the Oquirrh Expressway, but it is on UDOT’s 2050 long range plan, according to Tooele County Commission Chairman Wade Bitner.

“With the expressway on the 2050 plan, we need to do all the work we can to prepare for the expressway, like acquire the right-of-way,” Bitner said. “Then we can work on moving the plan up on UDOT’s schedule and get funding.”

Bitner said that’s how the County Commission was able to get funding for the first phase of the Midvalley Highway, which will run from mile marker 94 on I-80 to Sheep Lane on state Route 138.

The County, using corridor preservation funds, paid for the environmental impact statement for the Midvalley Highway, surveyed the route and acquired the property for the first phase.

UDOT is currently working on the design for the Midvalley Highway. The project should be ready to go out for bid in early 2019 with the completion date in mid-year of 2021, depending on weather, according to Bitner.