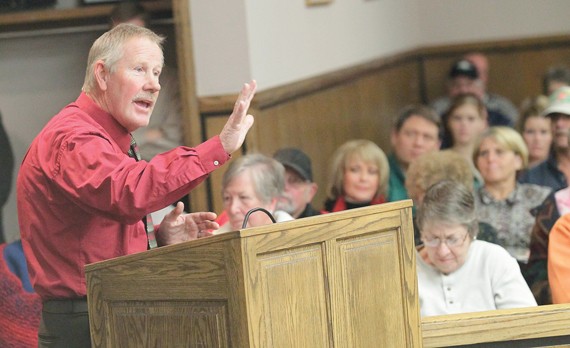 Gordon Beals speaks during the Tooele County truth in taxation hearing Tuesday night. Community members at the hearing asked the county commissioners to find another way to balance the 2013 budget.

The three Tooele County commissioners sat and listened stoically Tuesday evening as the public spent over an hour delivering a simple message: We don’t support a tax hike.

At the first of two truth in taxation hearings — the next one is scheduled for August — a room of approximately 150 people stepped to a podium one after another to speak against the 82 percent property tax increase being proposed by commissioners.

The meeting, held in the old courtroom on the third floor of the county building, started with a presentation by Tooele County Treasurer Jeremy Walker. He explained the tax increase only applied to the county general tax rate and would add $88 to the tax bill for the owner of a $150,000 home. Commissioner Jerry Hurst then stood and explained the circumstances that brought about the need for the tax increase. Hurst said the county avoided a tax increase for the last 25 years by using revenue from mitigation fees, but mitigation fees dropped abruptly in the last quarter of 2012.

“We have not had a tax increase since 1987 because we were blessed to have companies paying millions of dollars a year in mitigation fees,” said Hurst. “The cash cow is sick.”

Hurst said while commissioners planned for the loss of mitigation income from the Deseret Chemical Depot, which totaled $577,511 in 2011, they were caught off-guard by a $2.8 million drop in mitigation fees from companies in the west desert this year. That drop forced the county to make drastic decreases in the 2012 budget, which included laying off 50 employees, reducing hours and salaries of many remaining employees, curtailing equipment and supply expenses, and reducing travel expenses. The county is also selling off land acquired through tax default to bring in income and put the property back on the tax rolls, and has refinanced bonds to lower interest rates and payments, said Hurst.

“Reducing expenses isn’t something we just started this year,” said Hurst. “It began four years ago with a soft hiring freeze. We only replaced essential staff when people retired or otherwise left work.”

Following Hurst’s presentation, the audience was not convinced that a tax increase was the only remaining option to balance the 2013 budget, with several people volunteering to sit on a committee to recommend further budget reductions.

“Now is not the time to raise taxes,” said Erda resident Jeff McNeill. “I think we can do more privatization of services. I think we have lost the meaning of ‘essential services’. The only essential service of government is to protect my God-given rights and nothing more.”

The idea of privatization of county services, especially with the Deseret Peak Complex, was a common theme among several citizens that spoke at the meeting. One suggested Deseret Peak should be its own entity, separate from the county.

“Deseret Peak is a big money drain,” said Stansbury Park resident Jeffrey Fisher. “Does is have to be government funded? Why can’t it be its own entity apart from government?”

Others felt that operating a recreation complex was not within the proper scope of government activities.

“One contributor to the budget problem is [the county] trying to get into business,” said Mike Millard, an Erda resident. “Deseret Peak is an example. Government has no responsibility for recreation, and it is a business function that obviously should be privatized.”

Others felt there were more cuts that could be made in the budget.

“A small leak can sink a great ship,” said Grantsville resident Janet Cook. “As I look over the budget for next year, I think there are a lot of small leaks as well as humongous leaks like Deseret Peak.”

Some said they were ready to make sacrifices to balance the budget without a tax increase.

“We need to get rid of lots of programs,” said Tooele resident Nicholeen Peck. “In the newspaper, it said you might get rid of the county fair. I like unifying activities, but I say go for it. I say let’s get rid of what we have to get rid of in order to save household income and the budget of the county.”

“A tax increase of this magnitude is preposterous,” said Erda resident Doyle Taylor. “In this economy, any increase in taxes is unacceptable. We are all having to tighten our fiscal belts. If we have to relinquish some county services, so be it.”

Some expressed concern over the effect the tax increase will have on low-income families and elderly people living on a fixed income.

“I see many people in my practice that are just barely getting by,” said Patricia McWhorter, a psychologist that practices in Tooele. “Many of them avoid health care because they can’t afford a $25 co-pay. I worry what this tax increase will do to them.”

“I know taxes are going to go up for us senior citizens on fixed incomes,” said Grantsville resident Jerry Edwards. “I got a small raise in social security and everybody comes along and wants more in taxes.”

Following state law, the county will have another public hearing in August 2013 before setting the tax rate that will be collected in November 2013.