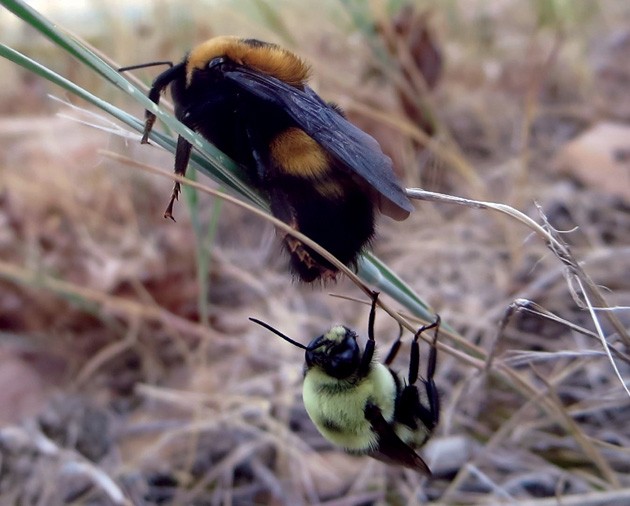 Belonging to a large family called Apidae, bumblebees are a species of bee that are members of the Bombus genus, which comprises more than 250 different species of bumblebees.

Depending on the species, bumblebees can range from a half-inch to 1 inch in length, while their stripe patterns and colorations can vary from yellow and black with sometimes red or orange. Though species differ in size, stripes and colors, most bumblebees are identical in physique by being large in size, with noticeably round, fuzzy bodies. Most are also similar in particular behaviors, lifecycles and the individual occupations between queens, workers, and drones that occur within a colony.

With queen bumblebees, they begin the construction of the hive and the start of colonies during the early spring after undergoing diapause — a winterized stage that enables them to survive winter.

Once the queen emerges, she sets off to feed and look for a suitable nesting destination. Soon after, she begins creating a celled mound made of pollen and secreted wax where she will lay her first batch of eggs. Preparing for incubation, the queen additionally stores nectar in a waxen pot near the mound so she may eat while sitting on the eggs.

During the first incubation, which lasts up to four days, the queen gives warmth to the eggs by vibrating muscles located in the thorax, continuing to the abdomen and onto the eggs by contracting her muscles down her body. Once the larvae hatch, the queen provides the larvae both pollen and regurgitated nectar for 10 to 14 days, then they proceed into their pupae stage by wrapping themselves in silk-bound cocoons.

While the pupae are developing into adults, the queen will incubate the cocoons for another two weeks until they emerge as adults. Intentionally, the first few batches of broods are all female workers, which are responsible for removing the burdens from the queen while taking on other various chores — including foraging for nectar and pollen, feeding larvae, incubating, cleaning and protecting the hive.

As the colony begins to progress, the queen bumblebee chooses when to lay various eggs (workers, drones, and queens) while caring for larvae and dominating the hive. Worker bumblebees, unlike honeybees, are fertile and are capable of producing unfertilized, male drone eggs. Queens will attempt suppressing reproductive competition by eating the worker’s eggs and resorting to physical aggression. As the colony increases, workers begin to successfully lay drone eggs as their numbers become more unmanageable. Eventually, queens will stop laying worker eggs and begin laying more queens and drones. Towards the end of summer, young queens known as gynes will prepare for diapause and leave the nest to mate. Once mated with several drones and storing the sperm so it can be used the following season, queens then go into diapause usually by hiding underground from the cold, surviving on the preserved energy from their fat.