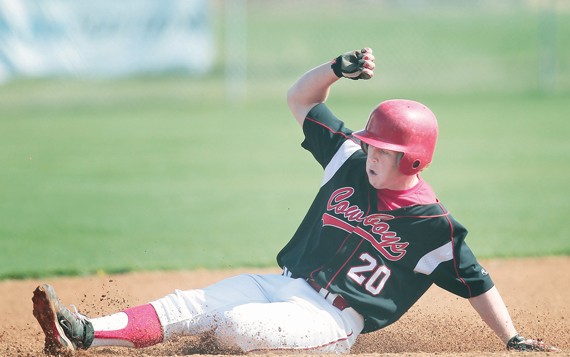 Grantsville sophomore outfielder Ky Fisher slides into third base Tuesday against Morgan. The Cowboys scored nine runs in a shutout against the Trojans.

Grantsville got the hot start it needed in a game that went a long way in the Region 11 standings. Morgan and Grantsville were both tied for second in region with 4-2 records, but the early offense for the Cowboys was enough for them to be sitting alone in second place after Tuesday afternoon.

Grantsville scored three runs in each of the first two innings and that was plenty of run support for Dalen Erickson on the mound. Erickson didn’t allow Morgan to get on the scoreboard as Grantsville pulled out a big 9-0 victory in Grantsville.

“I don’t think that we ever allowed a runner to get in scoring position against Morgan,” said Grantsville coach Loren Anderson. “I don’t even think Dalen (Erickson) had his best stuff out there but he still picked up the win.”

Erickson only allowed three hits to Morgan while striking out six in the victory. Kelby Landon led the way for the Cowboys at the top of the lineup by going 2-for-3 with a double and a single while scoring on three different occasions.

After shutting down Morgan in the top of the first, Grantsville went right to work in the bottom half. The Cowboys loaded the bases when Landon and Skyler Cloward walked and Quinton Smith reached on an error.

Connor Turner brought in the first run with a sacrifice fly to right for a 1-0 lead. Erickson helped his own cause on the mound by laying down a bunt that scored Smith and then a Morgan error on the play allowed Cloward to score to give Grantsville a 3-0 lead after one.

The scoring continued in the second when Ky Fisher started it with a one-out single and then reached third on a Morgan error. Fisher eventually scored on another Morgan error for a 4-0 lead.

Grantsville scored all three of their runs in the second as a direct result of errors on the Trojans. Landon scored for the second time in the game on a throwing error and then Smith also came in on a later error for a 6-0 lead after two innings.

With the early run support, Erickson settled in on the mound and actually didn’t allow a Morgan player to reach second base the entire game. With only six strikeouts, Erickson had a solid defensive effort behind him to secure the shutout.

After taking a few innings off scoring, Grantsville looked to add a few insurance runs in the sixth. Fisher started the inning with a walk and Landon followed with a single. Fisher scored on a Morgan error for a 7-0 lead.

Turner brought in his second run of the game with a ground out to the right side to score Landon and then Erickson added the finishing touches with a RBI double to right-center for a 9-0 lead.

With the spacious lead, Erickson shut down Morgan in the seventh and got them to go three up and three down to secure the victory.

Grantsville will look to continue its winning ways when they travel to face Ogden on Friday at 3:30 p.m.