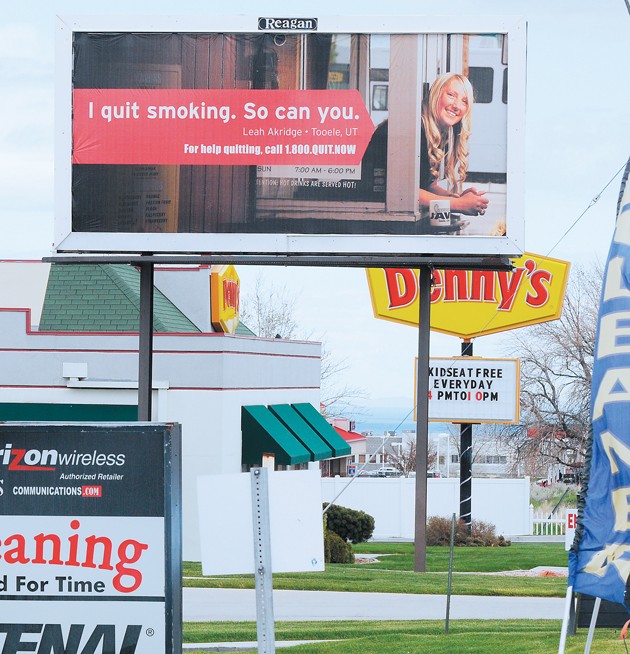 A tobacco cessation billboard featuring Leah Akridge, of Tooele, is seen on Tooele’s Main Street Monday morning. Akridge helped inspire some of her family members to quit smoking, but tobacco cessation classes in the county have not been well attended.

When Leah Akridge got pregnant with her second child, she realized it was time to quit smoking for good.

She knew it would be a good change for her, and for her two sons as well.

“I got pregnant and I knew I had to quit smoking,” Akridge said. “It wasn’t anything special. It was just mind over matter.”

But Akridge didn’t comprehend how big of an impact she’d eventually have on her family and community.

The 33-year-old Tooele resident, who has now been tobacco free for two and half years, inspired her mother, brother, cousin and cousin-in-law to quit using tobacco shortly after she did. Now, through a billboard visible on Tooele’s Main Street just before Denny’s Restaurant, the community is also able to see Akridge’s accomplishment.

“It’s kind of weird to see myself, but it’s also rewarding in a sense,” she said. “Not everyone gets that acknowledgment for quitting smoking. I smoked for a long time. I started younger than I want to admit. It was hard to quit, because I had stopped before but I always ended up starting again.”

On the billboard, Akridge is seen leaning out the window of Janna’s Java in Tooele — where she is employed — and the words written next to her say, “I quit smoking. So can you. For help quitting, call 1-800-QUIT-NOW.”

“I hope people see that I’m a real person and not just someone they took a picture of to post up,” she said. “Working at Janna’s Java, I see a lot of people and a lot of people know my face. It’s funny to have people coming through and saying they see me on the billboard.”

Akridge’s story is also playing at local movie theaters and is in production to become part of a statewide campaign through the Utah Department of Health. But her story and billboard are just a small part of what UDOH and the Tooele County Health Department are working on to make quitting smoking more of a priority in Tooele County residents’ lives.

“As far as demographics for Tooele County, we just have a higher smoking environment,” said Kim Clausing, health educator on tobacco prevention for the county health department. “We’re the third highest for tobacco use in the state. I think it’s all the industrial-type jobs we have here that have more tobacco use.”

Clausing, who has worked in tobacco prevention at the health department for 10 years, said unfortunately, community tobacco cessation classes held over the years haven’t been successful because of poor attendance.

“We have had little success with people wanting to attend those classes, so instead we’ve tried to make quitting smoking more user-friendly and user-savvy over the years,” she said. “The state health department contracts for the quit line, so we promote using the quit line. They provide free counseling services to Utahns.”

The quit line, which is 1-800-QUIT-NOW, also has an accompanying website at www.utahquitnet.com.

“The website is for people who are more computer savvy,” said Clausing. “It’s an online group where people can blog and talk about experiences quitting and get help and support that way.”

In order to promote the quit line, Clausing said some strong advertising, besides Akridge’s billboard, is going into effect locally.

“We’re going to print coffee sleeves that have the quit line info on them for all the local coffee shops,” she said. “This will just be a Tooele County thing, so that we can put our local spin on it.”

Besides the campaign, Clausing said she has also found some success in visiting with businesses and employees.

“At people’s requests, we will work with individuals or go to work sites to have a cessation class,” she said. “As statewide and local health departments, we’re trying to see what ways are the best to reach out to people, and the work site seems to be working.”

This type of approach is what worked so well for Akridge a few years ago when she first found out she was pregnant and decided to quit smoking for good.

“Kim would come through the drive thru [at Janna’s Java], and she knew me before I got pregnant and knew I was a smoker, so she was an amazing support in telling me I could quit,” Akridge said. “She would pull up in the drive thru and ask me how many days it had been [since I’d smoked a cigarette]. It was so helpful to have her support.”

“From the state of Utah, through state grants, we get money through the Master Settlement Agreement and from [cigarette tax revenue],” he said. “Then we also get money from a comprehensive tobacco grant, which is a federal grant.”

The Master Settlement Agreement funds come from a lawsuit that Utah and 45 other states filed in 1998 to recoup funding from the tobacco industry for costs incurred to states for tobacco-related illness. Of the $42 million in restitution funds paid to Utah each year, $4 million are allocated to UDOH’s Tobacco Prevention and Control Program. From there money is further allocated to county and area health departments, and to other programs throughout the state.

“We use that funding to prevent tobacco use for youth and help people quit using tobacco,” Clausing said. “With some of that funding we also do compliance checks to make sure retailers are not selling tobacco to minors. [Through the federal grant], which comes from Centers for Disease Control funding, we work on policy and environmental change. We try to get smoke-free workplaces or talk to employers about having insurances that help people quit smoking. With the environmental changes, we try to change social norms and make youth realize it’s not normal to smoke.”

Clausing said a business summit is coming up through the Utah Tobacco Prevention Task Force, and she hopes Tooele businesses will participate.

“We’re hoping businesses will come to this and use it as a resource to help their employees quit using tobacco,” she said.

The summit will be held May 1 from 8 a.m. to 11:30 a.m. at the Marriott City Center, 220 S. State in Salt Lake City. The event is free and breakfast will be provided. For more information, visit tobaccotaskforce.com.