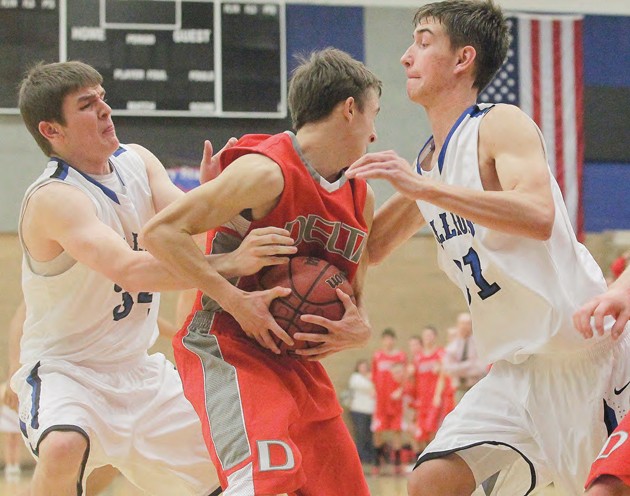 A missed free throw, an untimely timeout and missed inside shots foiled Stansbury’s chances for victory Tuesday night at home against Delta.

After falling behind by 14 points after one quarter, the visiting Rabbits battled back to defeat Stansbury 72-68 in overtime.

Stansbury started fast and bolted out to a 23-9 first-quarter lead. The second quarter was a different story as the Rabbits pressed the Stallions and forced several turnovers. Delta sliced the Stansbury lead to 31-30 at intermission.

The Stallions took control again in the third quarter, and when Tom Griffith nailed a 3-pointer from the left corner, they led 49-43 heading into the final frame. It still looked good at the 5:14 mark of the fourth when Tanner Barton buried a trey from the left side to make it 56-48 for the Stallions.

Delta wasn’t finished, however, and went on an eight-point run to tie the game at 56-56 with 3:36 remaining. The Rabbits took the lead briefly at 60-58, then Stone Tia drove inside to tie it at 60-60 with 1 minute remaining.

Niko Chacon stole the ball and the Stallions worked it inside for several shots by pounding the glass for offensive rebounds. But the ball just would not drop for a possible game-winner and the contest went into overtime.

Delta guard Hunter Johnson was having a terrific game and when he sank two foul shots his team led 67-64 with 1:03 remaining. Stansbury stayed closed with a great feed from Ryan Robbins to Tia to slice it to 67-66. With a slight lead, Delta played keep away and were able to hit foul shots to go up 70-66 with 27 seconds left in OT.

Tia drove the baseline for a basket to slice it to 70-68 with 16 seconds left in the first overtime. The two teams turned it over a couple of times, and the Stallions ended up with the ball underneath their own hoop with 7 seconds remaining.

A pass from Robbins to Barton for lay-up seemed to tie the game at 70-70 with 4.8 seconds left to likely send the game into a second overtime. But one second before the play, Stansbury coach Ryan Harris called time-out from the bench and the basket was disallowed.

“It looked like Ryan (Robbins) was going to fall out of bounds and we were going to lose possession so I called timeout,” Harris said. “They were good refs and were aware we might want to call a timeout. A lot of times you can’t get a timeout in that situation, but the ref was right in my lap and we got the timeout.”

Stansbury got the ball inside again after the time-out and was fouled, but could not hit the front end of a one-and-one with 3.9 seconds left in the game. Delta nabbed the rebound off the missed foul shot, one of their players was fouled and hit the shots to end the game in front 72-68.

“We had plenty of chances to win, we just let it get away. We played really well early by pushing the ball and getting a lot of open shots. Then they hit us with their press in the second quarter and we turned it over quite a bit. We were in some foul trouble early on with a couple of our key guys on the bench and we didn’t handle their press. Usually were pretty good on offense against the press,” Harris said.

“You have to give Delta credit; they just don’t ever quit regardless of the situation whether they are up by 40 or down by 40,” the coach said. “It was a fun game. I just wish we could have pulled it out in the end.”

Robbins led the way for the Stallions with 22 points, seven rebounds and seven assists. Griffith scored 13 with five rebounds and Tia scored 12.

The Stallions play three games in the next six days. The squad travels to Kearns on Friday, hosts Westlake on Saturday and hosts rival Grantsville in the Region 11 opener on Wednesday, Dec. 19.