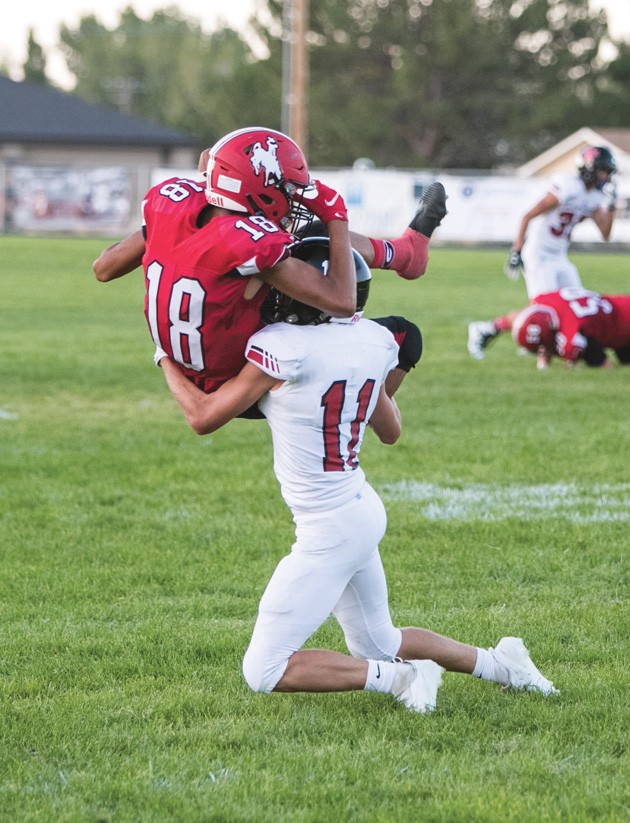 Grantsville’s Nate Wright (18) makes a tough catch during the Cowboys’ Aug. 14 game against North Sanpete at Grantsville High School. Wright caught a touchdown pass and made all seven of his extra-point attempts in Grantsville’s 42-9 win over Delta on Friday night.

Over the past couple seasons, the Grantsville football team has become known for its defense — one of the stingiest in Class 3A.

However, the Cowboys have added an explosive offense to their arsenal in 2020, making them even more dangerous. Just ask Delta, which got shredded by Grantsville’s quick-strike attack in Friday’s 42-9 win for the Cowboys at Delta High School.

Grantsville quarterback Caleb Sullivan picked apart the Rabbits (0-4) with almost surgical precision, completing 18 of his 19 passing attempts for 207 yards and four touchdowns. He was able to find wide-open receivers time and time again, allowing the Cowboys (3-1) to seize control of the game with 28 points in the second quarter.

The teams traded touchdowns late in the opening quarter. Grantsville got on the board first, aided by a pass-interference call against Delta that wiped out a would-be interception and gave the Cowboys a first down at the Rabbits’ 13-yard line. On the next play, Sullivan hit Noah Mouritsen for a touchdown, putting GHS in front 7-0 with 2:30 left in the first quarter.

Delta answered quickly, with Will Finlinson’s 63-yard touchdown run tying the score with 35 seconds left in the first. But after Grantsville failed to convert on a fourth-and-16 on its next possession, there was no slowing down the Cowboys for the rest of the first half.

First, Ethan Rainer picked off Delta quarterback Austin Topham for the second time in the half, giving the Cowboys the ball deep in Delta territory. Sullivan found Nate Wright for a 26-yard touchdown pass on the next play, putting Grantsville in front to stay with 7:39 left in the first half.

Grantsville’s Baylor Hall forced a Delta fumble near midfield just three plays into the Rabbits’ next possession, with Branson Yager’s recovery putting the Cowboys in prime territory yet again. Sullivan connected with Dillen Richardson on a 28-yard pass to set Grantsville up in the red zone, and Blake Thomas scored from 20 yards out to extend the lead to 21-7 just 1:22 after Wright gave them the lead.

A little more than two minutes later, Thomas struck again shortly after Delta went three-and-out and had to punt. Thomas looked like he might go down for a loss, but he broke a tackle in the backfield and sprinted 54 yards for his second TD of the evening, putting GHS up 28-7 with 4:11 left in the half. Another Grantsville interception — this one by Hunter Johnson — gave the Cowboys the ball back on the Rabbits’ 25, and a pair of completions by Sullivan to Mouritsen and Payson Sorensen, along with a pair of runs by Thomas, moved the ball to the 2. Sullivan capped the drive with a 2-yard TD pass to Eli Mondragon that stretched the lead to 35-7 with 2:04 left in the half.

Grantsville’s final touchdown came as a product of a sustained drive, rather than a single big play. After forcing a Delta punt on the first possession of the second half, the Cowboys took over on their own 42-yard line. Sullivan’s 10-yard pass to Mouritsen on third-and-5 kept the chains moving, and he later hit Josh Staley down the right sideline for a 34-yard pass that put the ball at the Rabbits’ 1-yard line.

Delta’s defense stood tall, stuffing Kaden Kelley on back-to-back run plays, and a pair of GHS penalties backed the Cowboys up to the 15-yard line for their third-and-goal play. But Grantsville had one more trick up its sleeve, as Sullivan tossed a shovel pass to Richardson as he sprinted across the formation, and Richardson ran into the end zone untouched to put the Cowboys up 42-7 with 5:42 left in the third.

Delta added a safety late in the game with Grantsville’s backups in the lineup as a shotgun snap sailed out of the back of the end zone.

The Cowboys’ defense made things difficult for Topham, who was 4-for-15 for 32 yards and three interceptions. Outside of Finlinson’s touchdown run in the first quarter, the Rabbits only averaged 3.3 yards per rushing attempt, while Grantsville averaged 5.3 yards per carry.

Kelley, Mouritsen and Noah Parks had four tackles each to lead the Cowboys, with Rainer and Yager each recording a tackle-for-loss.

Grantsville has now outscored its opponents 91-16 during its current three-game winning streak. The Cowboys have not allowed more than one offensive score in any of the three games against Tooele, Manti and Delta.

The Cowboys will play host to San Juan in a non-region game Friday night at Cowboy Stadium. They will wrap up their non-region schedule on the road Sept. 18 against Beaver, with their first Region 13 game scheduled for Sept. 25 against South Summit in Grantsville.